You are at:Home»Classical Music»Beethoven film does justice to its multifaceted subject
Advertisement / Publicité

Few lives have been pored over more thoroughly than Beethoven’s. Still, ambiguities remain. Should we censure Louis van Beethoven, released to coincide with the composer’s 250th birthday, for abusing the lacunas, or praise the film for making the most of them? A difficult question, which I do not propose to answer with finality in this review. There is no doubt, however, that this German made-for-TV feature is deftly put together and altogether watchable. Music lovers need not hesitate.

The format is not so much a flashback as a triple narrative that shifts between Beethoven’s upbringing as a boy in Bonn; his emergence in this provincial capital as a musician destined for greater things in bigger places; and his ill-starred visit, near the end of his life, to the country estate of his prosperous but not-altogether-sympathetic brother Johann. It is remarkable that the film makes no reference to the onset of the composer’s deafness but portrays this condition (quite realistically) as almost complete in the late-in-life segments. Indeed, the heroic “middle period” Beethoven has no bearing on the narrative. One wonders if director Niki Stein has a “midquel” in mind.

Not that the bookends lack dramatic interest. The prodigal adolescent, played with quiet magnetism by Colin Pütz, is abused by his sodden father, loved by his tubercular mother and nurtured by his teacher Christian Gottlob Neefe (the warmly understated Ulrich Noethen). Another teacher, Tobias Pfeiffer, is amplified into a central figure who not only encourages the composer’s independent creative instincts but sows the seeds of his republican political sympathies, particularly by reciting (in German) the preamble to the American Declaration of Independence in a tavern. Sabin Tambrea carries off this fanciful scene with gusto.

Anselm Bresgott portrays the teenage composer as both shy and defiant, the latter quality bursting at the seams of the former. Possibly the film’s most outlandish invention is an encounter at a party at the von Breuning mansion – in biographical point of fact a crucial second home for Beethoven in Bonn – in which the composer resolves a disagreement with an arrogant count by punching him squarely in the face. The matriarch of the household, Helene von Breuning, is portrayed as less loving than in most Beethoven biographies, mostly because the plotline requires her to intervene in a budding romance between the composer and her daughter Eleonore (the luminous Caroline Hellwig). There is an element of invention here, but not in flagrant violation of the factual record. 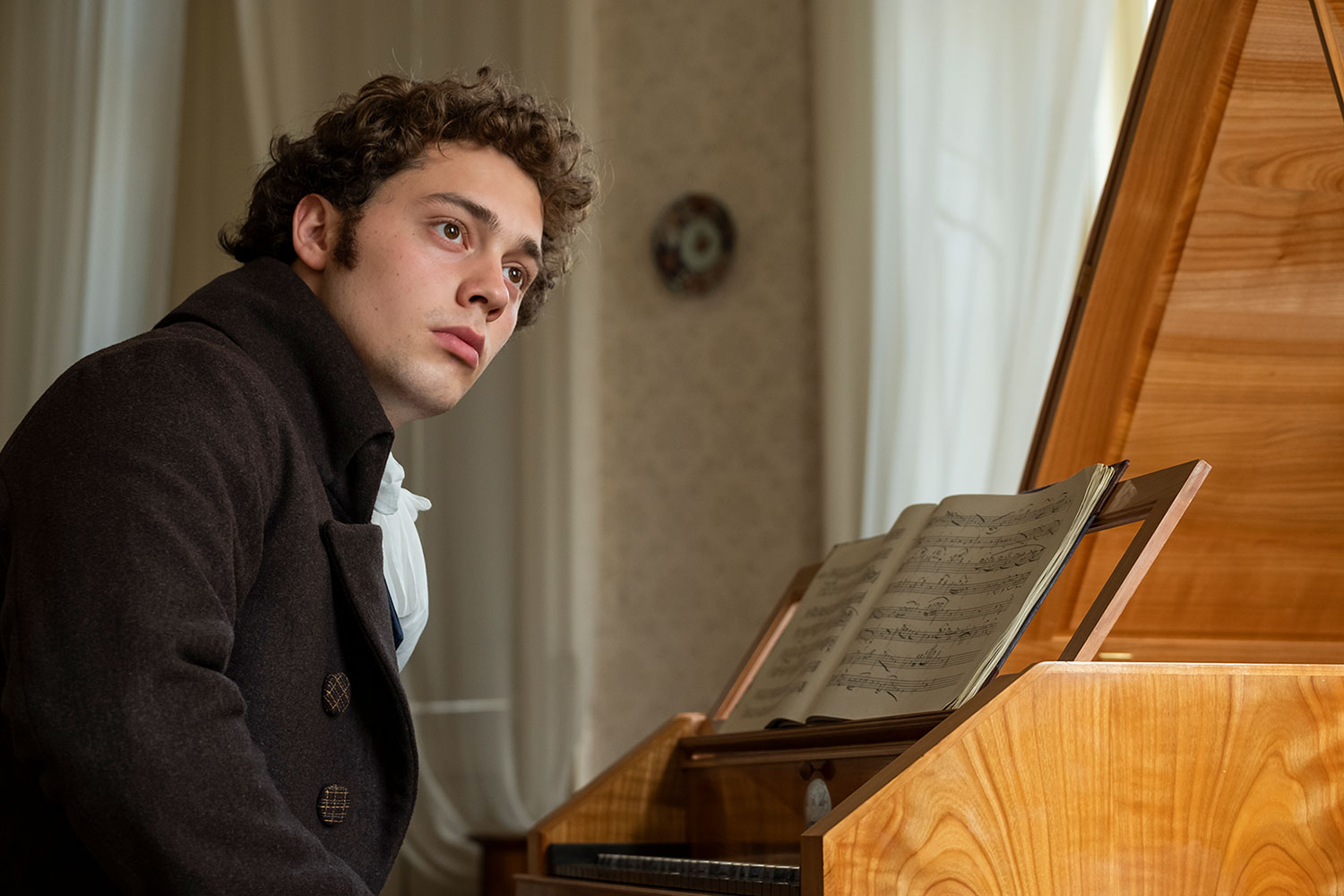 Young Beethoven (often called Louis, his name in French) admires Mozart, as well he might. Unfortunately, a trip to Vienna to meet the master does not go well, the elder genius (played with post-Amadeus eccentricity by Manuel Rubey) receiving the younger with a mix of affection and impatience. Director Stein goes so far as to imagine a salon performance of Mozart’s Piano Concerto No. 20 by Beethoven which Mozart interrupts for no good reason. A kind of improvisatory duel follows, which convinces Mozart of the visitor’s bona fides. It is hard to believe that documentation of such an encounter would not survive, but the scene works as cinema. An ironic context is invented for Mozart’s famous (if hard to source) quotation: “Soon, the world will know his name.” Beethoven also hears his hero say: “Men like us will always be dependent on the favour of princes.” This is an axiom that Beethoven, as an independently successful artist, was among the first to subvert. Some viewers will question the great stress laid by the film on the influence of Mozart, whose music is almost as prevalent as Beethoven’s in the soundtrack. If all this tips the balance a little away from the traditional image of Beethoven as an almost entirely self-made genius, it is not an irresponsible perspective.

A good third of the movie concerns itself with Beethoven’s final autumn. Tobias Moretti is an appropriately moody lookalike. Most communication with the 55-year-old composer is achieved through notebooks but Stein has also created some interesting audio approximations of what little Beethoven might have been able to hear at this stage of his life. At one point we get a flashback to the spring in which Beethoven chastises the Schuppanzigh Quartet for adopting too slow a tempo during a rehearsal of the Grosse Fuge, the uniquely demanding work that even Beeethoven’s admirers found hard to understand. Like other musical sequences, this is carefully done, as the composer surmises by watching the laboured bow strokes the tempo he cannot actually hear. 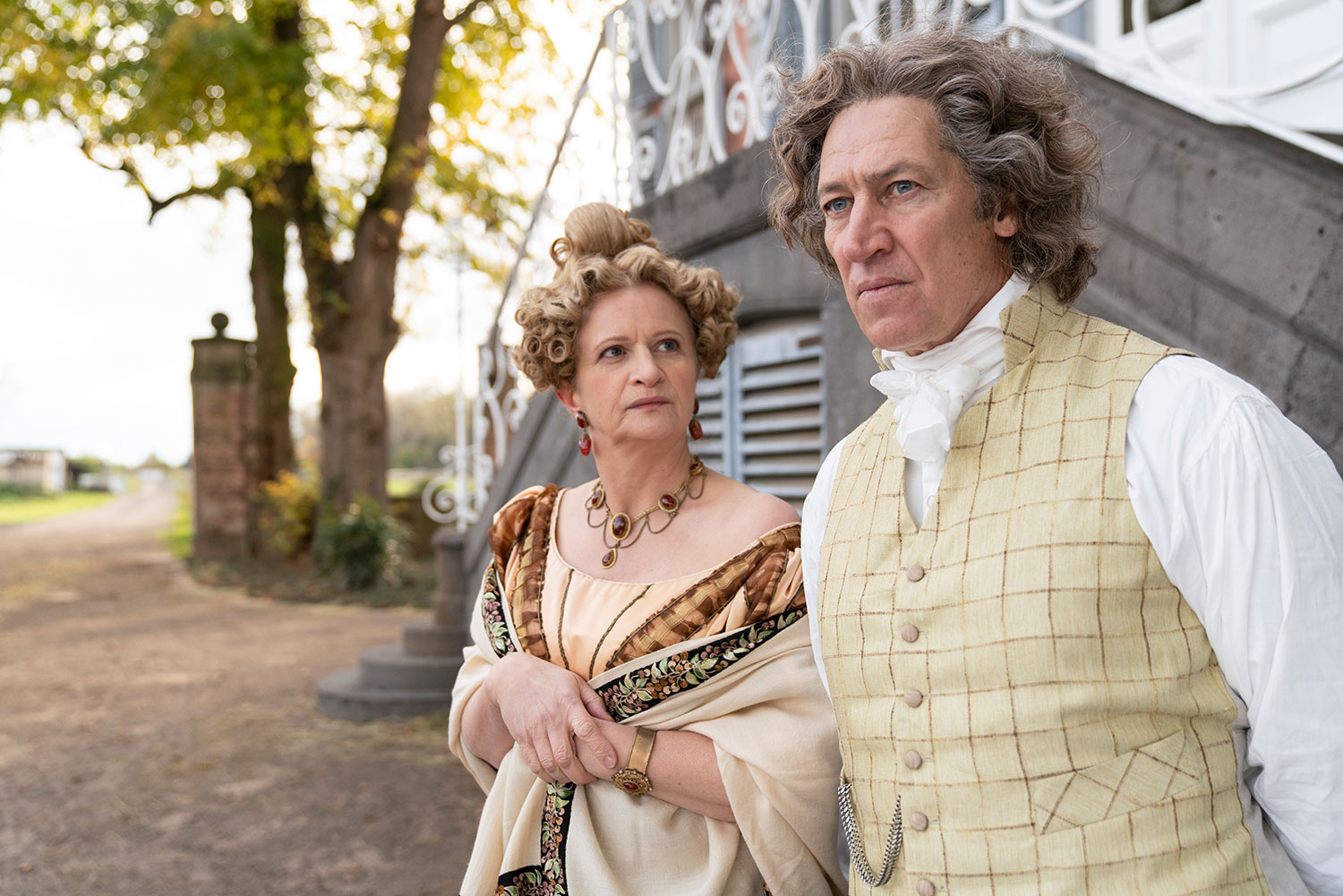 While a guest at Johann’s home, Beethoven is reliably Beethoven, neglectful of social niceties, impatient with friends and family and immersed in his final compositions, the Quartet Op. 135 and the new finale for the Quartet Op. 130, which famously replaced the Grosse Fuge. Money continues to matter to him. He is also preoccupied by memories of Eleonore, from whom he receives an affectionate letter. One biographical element that the film struggles to contextualize is Beethoven’s relationship with his nephew Karl, who accompanies him as a factotum to Johann’s estate not long after having made a pitiful show of attempting suicide. Many writers have tried to sort out the psychology of this feckless young man, on whom his uncle undoubtedly made many demands. Stein views Karl sympathetically but the director surely errs in supposing him to be capable of an accomplished performance of the “Tempest” Sonata. At any rate, the sojourn with Johann ends when Beethoven’s resentful sister-in-law loses patience with his failure to appear punctually for dinner and insists on charging rent. The offended composer decamps for Vienna on Dec. 1 in fatefully foul weather. Screen titles in an epilogue inform us of Beethoven’s illness and death in 1827 – to the stirring strains of the finale of the Ninth Symphony.

This music and a bit of the Allegretto of the Seventh Symphony are provided by the WDR Sinfonieorchester Köln under Jukka-Pekka Saraste, who goes unmentioned in the final credit roll. Much use is made of the late quartets in the scenes emphasizing Beethoven’s inner life.  The Artemis Quartett is the admirable ensemble. It is interesting that both Pütz as the pre-teen composer and Peter Lewys Preston as Karl are equal to playing period pianos, and well.

Louis van Beethoven does not create a completely satisfying arc because it could not. Lives are messy and Beethoven’s certainly had its vicissitudes. Still, this film is well made and respectful of its formidable subject. The location photography is sumptuous, particularly in candlelit interiors, and performance sequences have an authentic feel. By toggling between the powered-wig 18th century to the more egalitarian 19th, the narrative creates historical momentum it might not have enjoyed had the period been confined to a few contiguous years. One of the most salient points about Beethoven as a man and artist is his crossing the span of two centuries. If there are a few points of biographical interpretation with which a dyed-in-the-wool Beethovenian might take issue, so be it. Beethoven is eternally worthy of debate.

Louis van Beethoven is not scheduled for release in Canadian theatres. For video-on-demand information, go to https://www.filmmovement.com/louis-van-beethoven.