You are at:Home»Classical Music»Vocal»Opera»A little literature, and some Broadway, in new Leipzig Flying Dutchman

LEIPZIG – Is sanity making an operatic comeback? Surely not in Germany, you say, where “innovative” productions still have a firm hold on the houses and the headlines.

Yet a generally comprehensible (and, in showbiz terms, spectacular) new staging of The Flying Dutchman has turned up in the capital of Saxony, which is most often equated with Bach but is also the city where Wagner was born and where (the local Wagner society will be happy to remind you) the first complete production of the Ring outside of Bayreuth was given in 1878.

The Leipzig Opera House in 2008 was also the site of an “interpretation” of this opera (yes, more quotation marks) that involved gruesome slaughterhouse videos and a stripper who was quite ready to respond to the longings expressed by the lonely Steuermann in the opening minutes of the drama.

An audience revolt ensued. In 2011, Ulf Schirmer, a conductor rather than a theatre man, was named Intendant, the chief executive. Peter Konwitschny, the well-known schlockmeister who was head of production, packed his bags. 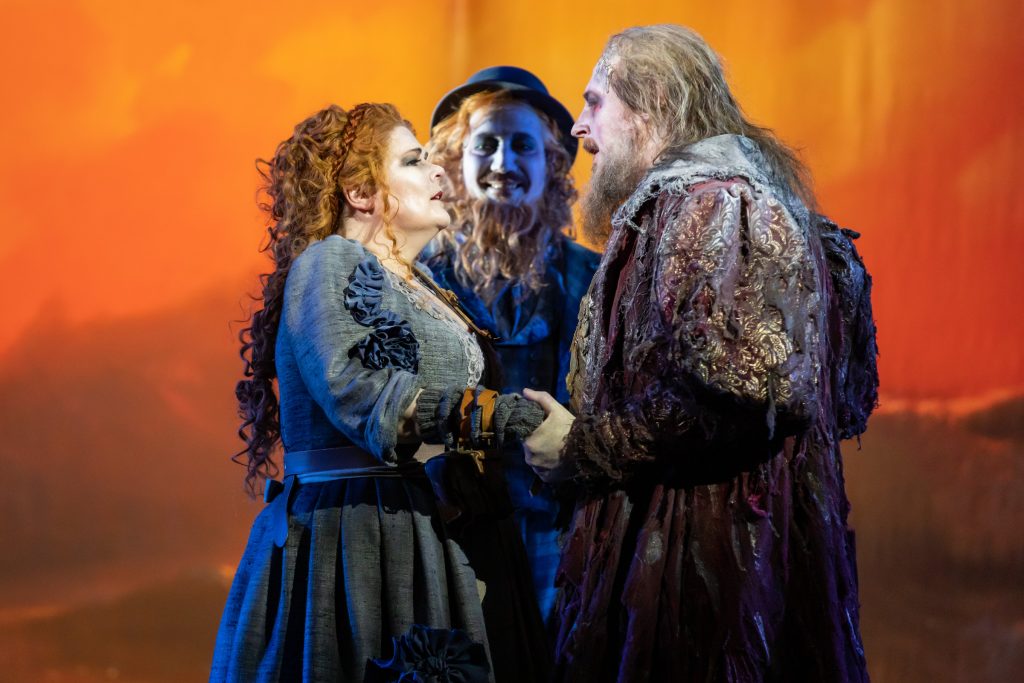 It was time for another Dutchman. To judge by the cheers heard after the performance on May 12, the operagoers of Leipzig are pleased with the approach of Michiel Dijkema (who is Dutch himself). Indeed, they could not resist the temptation in Act 3 to applaud the emergence from the fog of a ship with blood-red sails, a coup de théâtre that might stand comparison with the landing of the helicopter in Miss Saigon or the collapse of the chandelier in The Phantom of the Opera.

It was a striking sequence, and not the only one. But a Dutchman must be made of more than this. As heartened as I am by any migration away from directorial narcissism, the evening was less than entirely satisfying.

To be clear: There was a concept, albeit more literary than provocative, based on the biographical fact that Wagner’s source for the epic tale of a captain condemned to sail the seas in search of true love was a satirical story by Heinrich Heine. Dijkema (responsible for direction and sets) wanted the audience to know all about it, projecting relevant excerpts of the text on hanging screens as the story progressed, along with period engravings. A fine show of scholarship, perhaps, but no aid to drama.

At least this framework mandated period costumes appropriate to the Norwegian coastal setting, although it must be said that these (as designed by Jula Reindell) had an old-fashioned ragtag look. Stage effects also ran hot and cold. Excellent use was made of the stage at the beginning, as the ghostly sailors are tossed by the storm (i.e. the rotating elevator apparatus). But why should the Dutchman’s treasures be found in the carcass of a beached whale? A traditional chest would suffice.

As for the portrait Senta carries with her in Act 2 (Leipzig does the three-act version of the opera) this is black, like a chalkboard, with no image of the Dutchman. Symbolism. Dijkema even managed to pay tribute to Regietheater protocols by requiring the Steuermann to copulate downstage centre with a prostitute (this being a mute role introduced by the director). 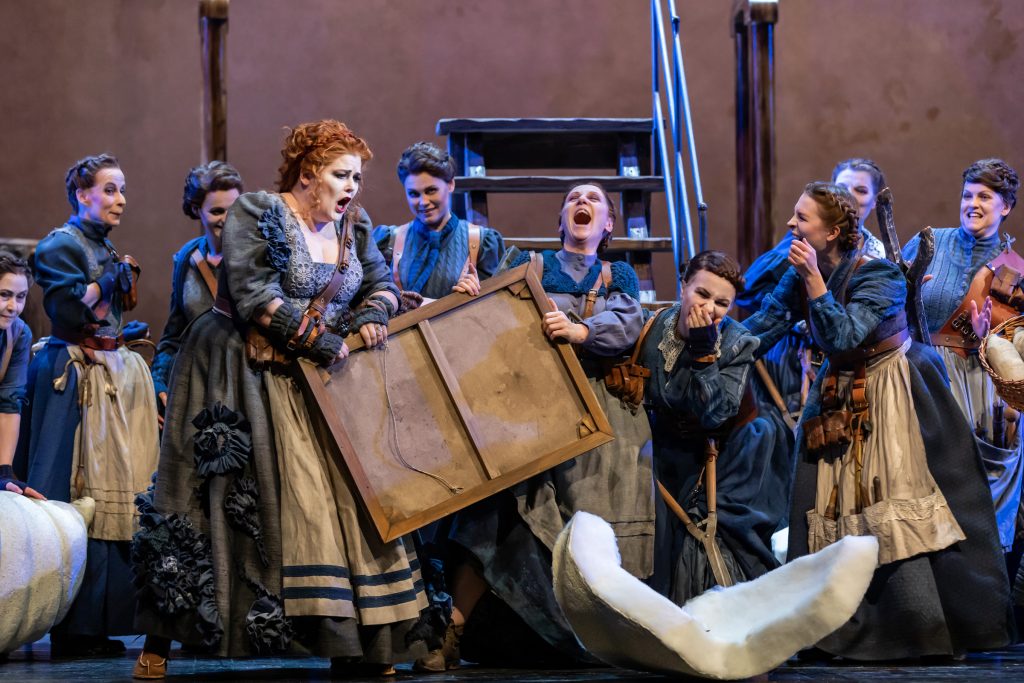 It is now my sad duty to report that Erik in Act 3 discovers Senta in bed with the Dutchman, a vulgar touch that downgrades the opera from myth to farce. The idealism of Wagner’s heroine is central to the story. Dijkema might prefer satire, but his assignment was to stage Wagner, not Heine. There is also a satirical reverse apotheosis at the end, achieved with further theatrical effects that are surprising enough to mask their dubious relevance. I suppose spoiler rules apply.

This is starting to sound like a bad review. But when the storyline is left reasonably intact and the singers remain in character, The Flying Dutchman is an opera worth seeing. And worth hearing, even if the cast was not quite of cross-the-Atlantic calibre. Scottish bass-baritone Iain Paterson was a gruff-sounding Dutchman, realistic rather than noble. Bass Randall Jakobsh sang and acted vividly as the mercenary Daland. Soprano Christiane Libor produced a glass-shattering dramatic sound as his daughter, Senta. Tenor Ladislav Elgr as Erik (dressed appropriately as a hunter) sang with a clear Italianate tone. Good acting made amends for erratic phrasing. Mezzo-soprano Karin Lovelius (wearing an eyepatch) was a handsome-sounding Mary and tenor Dan Karlström projected the boyish charm of the Steuermann (despite the aforementioned shenanigans). 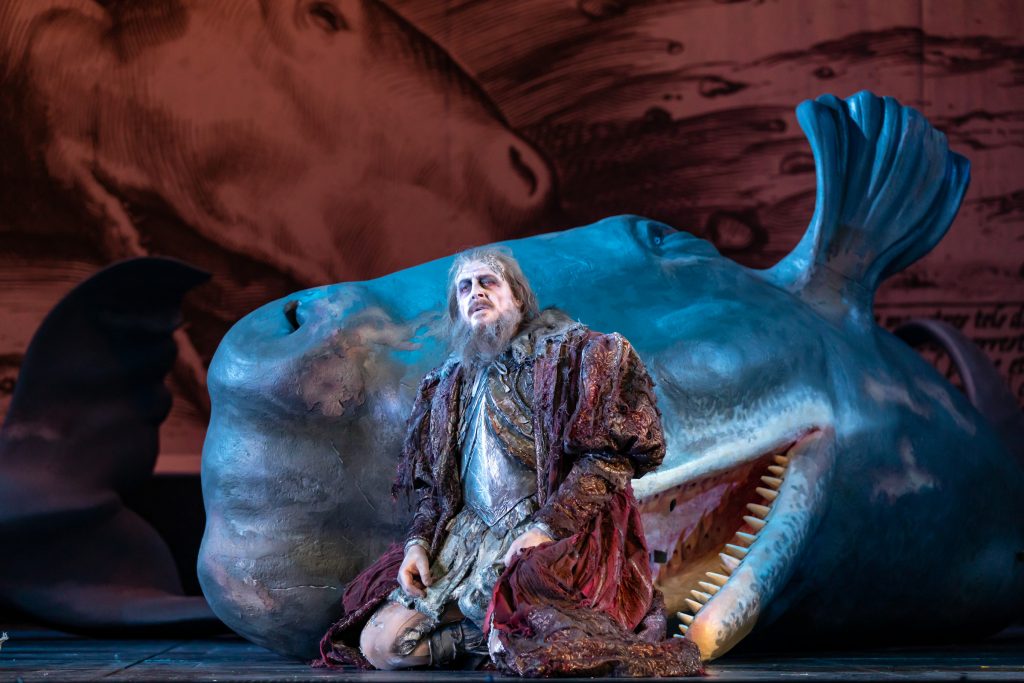 Female and male choristers were comparably robust. The spinning scene of Act 2 is done approximately half right. “Whirring wheels” are giant spindles atop some kind of wool-processing machine. The industrial revolution appears to be imminent. Perhaps the spinning girls innocently combing the wool will be made redundant.

Whatever the ill conceptual winds blowing through this production, it did convey the excitement of the opera, thanks to vibrant conducting by Christoph Gedschold and palpably Wagnerian sounds from the Gewandhaus Orchestra in the pit.

Yes, that Gewandhaus Orchestra, one of the oldest and most famous in Europe. As in Vienna and many other cities, the premier ensemble in Leipzig is large enough to function in both operatic and symphonic capacities, even on the same day. The Gewandhaus on this particular Sunday played in the morning in its eponymous 1981 concert hall. In the evening, across the Augustusplatz (which of course is no longer called Karl-Marx-Platz) an identically named orchestra occupied the opera pit.

They were not the same musicians: Of the 85 heard in Bruckner’s Fifth Symphony, only one was on Dutchman duty – filling in, I am told, for an ailing colleague. In any case, the 80-minute Bruckner performance under Gewandhaus music director Andris Nelsons had the makings of a worthy addition to the Deutsche Grammophon cycle of symphonies in progress: fiery in the first movement and Scherzo, resonant in the Adagio, energetic in the notoriously difficult fugal finale.

All of which is to confirm that Leipzig is a true musical capital. The MDR Leipzig Radio Symphony Orchestra also provides locals with symphonic nourishment (though not at the same level, to judge by the Brahms Fourth I heard Saturday night under Markus Poschner). The hall was full on Monday for the pianist Krystian Zimerman.  There are frequent organ recitals and of course weekly opportunities to hear the boys and men of St. Thomas Church sing Bach, in concert or as part of a service.

Berlin also has something going for it. May 10 marked the last performance of a revival of the 2010 Deutsche Oper production of Wagner’s rarely-encountered pre-Dutchman effort, Rienzi. Director Philipp Stölzl (who also enjoys a career in film) has done Mussolini-style, with ample video of the fearless leader, often coordinated with live acting. Perhaps we could have done without a comic dumb show during the overture that referenced another dictator, who in his younger days apparently admired Wagner’s breakout opera.

Regietheater? Sure, but undertaken with unusual intelligence and fulfilled by an excellent cast led by tenor Torsten Kerl in the title role. Mezzo-soprano Annika Schlicht as Adriano (a demanding trouser role) got even bigger bravos. Even the strange expedient of using a fill-in soprano to sing Irene’s music from the wings could not kill the show as conducted with high energy by Evan Rogister.

The main takeaway was that Rienzi is a good opera – indeed, a good grand opera – despite Wagner’s own refusal to accept it as part of the canon. It deserves a place in the repertoire.