Early out of the gate in announcing a 2021-22 season, the Opéra de Montréal on Saturday became one of the first Canadian companies to stage a post-pandemic opera for a live public. Or rather a pair of operas, separated by more than 80 years but closely linked in duration (about 40 minutes), mood and subject matter. They made for an absorbing if distinctly sombre evening in the Théâtre Maisonneuve.

The classic item was Riders of the Sea, a 1927 setting by Ralph Vaughan Williams of a play by John Millington Synge that tells of maritime mortality on the west coast of Ireland and how a widow and her two daughters deal with the loss. Dark lighting and modal music leave little doubt that Bartley, the lone surviving son, will not return from his planned outing. The suspense, such as it is, has to do with how Maurya, his mother, responds to the inevitable news. “There isn’t anything more the sea can do to me” is her grim reaction when villagers (the lucid Ballet Opéra Pantomime ensemble) haul the body on stage.

Le Flambeau de la nuit, a joint commission by the OdM, BOP and I Musici de Montréal heard in its premiere, followed this without a pause or change of set. Refugees from a war-torn city in flames hope to board a boat. A desperate mother manages to secure a place for her daughter, who turns out to be the supernatural “torch” of the title. The tragic end is entirely in keeping with the tone of the evening. “Cold bites the wind,” goes the libretto by Olivier Kemeid. “Grey waters swell.” Mysteriously indifferent in Riders, fate seems hostile in Flambeau.

The score by Hubert Tanguay-Labrosse ranges from tonal to atonal to microtonal but was united by serious intent and a natural feeling for vocal line. Sounds for the chorus are mostly lyrical. If the composer’s evocation of a storm seems only marginally less turbulent than the rest of the score, the passage makes its point.

Tanguay-Labrosse was also the effective conductor of both operas. The full-bodied strings of I Musici de Montréal were more apparent in Vaughan Williams. Happily, phrasing had shape and respiration. Monochrome leadership would obviously be fatal in such a show.

The cast, drawn partly from the Atelier program, was strong. The deep-toned mezzo-soprano Allyson McHardy effectively conveyed both the pathos of Maurya (in Riders) and the hard authority of the ferrywoman (in Flambeau). Sydney Frodsham, another mezzo, made incisive sounds as the Mother (Flambeau). Diahounba Fofana was touching in the spoken role of the child.

Riders was sung in English, Flambeau in French. The characteristic Irish sentence reversals of the former opera (“It’s a long time we’ll be”) created enough confusion on a few occasions to make the French surtitles seem a less troublesome option.

At any rate, this was an evening in which the foreground drama was subservient to overall mood. The set by Patrice Charbonneau-Brunelle and costumes by Elen Ewing equated bleak with black. A braided fabric and some background evocation of fire added a little visual relief to Flambeau. Director Édith Patenaude managed the quiet entry of the chorus to good effect.

The distanced audience gave the solemn show a hearty round of applause. This is not the first time unrelenting sadness has led to catharsis on the opera stage. 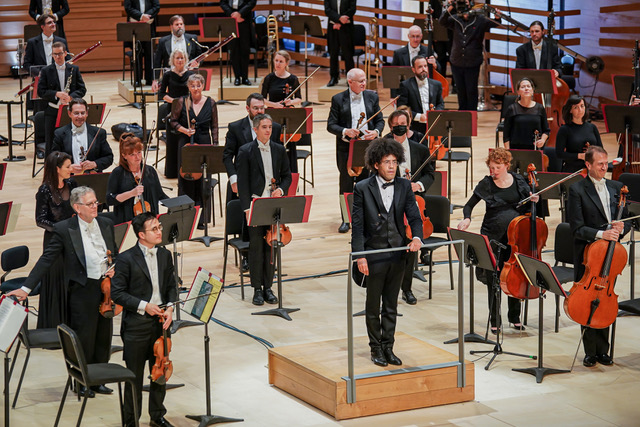 The finale was properly vigorous but not all the pastoral qualities of the first movement emerged. Violins sounded pushy in sustained fortes, of which there were quite a few. Overall I had the impression that Payare’s gestures outnumbered the interpretive results that reached the ear. The crowd, however, made clear its appreciation of  his exuberant podium style.

This program, recorded for future webcast, started with a lively if underprepared performance of the Overture No. 2 in E Flat Major of Louise Farrenc, 1804-75, a French composer whose accomplished oeuvre is rightly undergoing re-examination. Then came Haydn’s courtly Symphonia concertante in B Flat Major (Hob.I:105). Most interesting was the finale, which found the soloists (Andrew Wan, violin; Brian Manker, cello; Ted Baskin, oboe; Stéphane Lévesque, bassoon) chatting like witty philosophes in an Enlightenment salon.

The concert ran without a break. Payare and the players were in evening tails for the sake of the cameras even though this was an afternoon event. There was no printed program or announcement of the pieces played. I wonder how many in the audience knew they were listening to music by Louise Farrenc?