On April 28 COC premiered to a full house the last production of their 2017-18 season with Gaetano Donizetti’s Anna Bolena.

Directed by British Stephen Lawless, in a set design inspired by Shakespeare’s Globe Theatre, this production was originally built by Dallas Opera. Lawless also directed the previous productions of Donizetti’s Maria Stuarda in 2010 and Roberto Devreux in 2014 at COC. With Anna Bolena, the COC completes the Donizetti Tudor trilogy, all portraying Queen Elizabeth I’s reign. 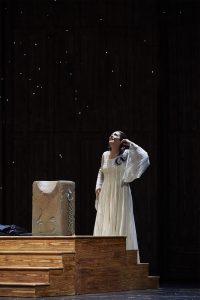 The Italian maestro Corrado Rovaris conducts the COC Orchestra and Chorus, accompanying the singers’ performance. The opera is sung in Italian and is supported by English surtitles.

This show is really an excuse to feature Canadian soprano Sondra Radvanovsky in one of her favourite roles. She is one of the top soprano’s of this era and the only to have completed the feat of singing the three Tudor Donizetti queens in one season at the Metropolitan Opera. She is also one of only three sopranos in the history of opera to have sung all three roles.

Hers is the kind of voice that you hear maybe only once in a decade featuring a strong and clear sound in the high range and an innate ability for breathtaking crescendos and decrescendos throughout her range.

The moving wood balconies scenography, supplied a very effective tool to bring dynamism into what can turn otherwise a very static opera. One wishes that the stage director could have used this not only to place the choir singers but also for the main singers. 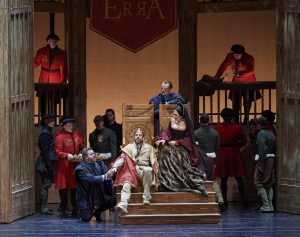 The conducting and the orchestra were impeccable, displaying dynamics and colours that were both organic and precise.

As Lord Percy, Bruce Sledge struck gold in many of his high notes during Act I. His singing kept improving as the show went on and he started to play more with the dynamics and colour of his voice, revealing a more subtle and beautiful side when singing dolce. Allyson McHardy portrayed the young Smeton in a simple and sincere way. Her bright and refined mezzo-soprano tone perfectly suited the pureness and nobility of her character.

The stage directing and the acting were subpar. One has the impression that the stage director had too many ideas and couldn’t adopt a clear line of thought for his opera. He alternated between realism and symbolism too often leaving the audience confused and sometimes giving comical results, which doesn’t seem appropriate for this drama.  For example in the “hunting” scene during the first half of the opera, Lawless chose to have two topless actors holding horns over their heads fight. The audience responded to this with a hearty laugh. 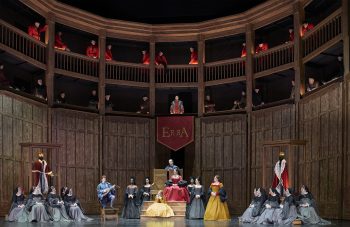 Lawless had many great ideas, but he didn’t stick to them. An example is the scenery. The big balcony’s with multiple windows in which the opera starts provided great opportunities and was pleasant to watch, but he quickly moved away from that scenery to transform it into the outsides of the castle, which wasn’t very credible. He then moved back and forth between sceneries, creating confusion.