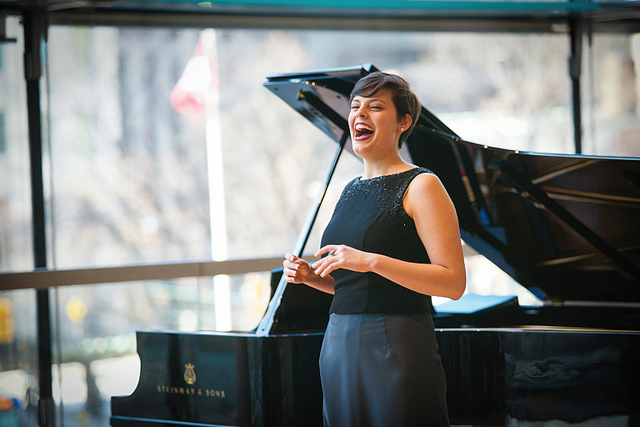 Toronto-based mezzo-soprano Emily D’Angelo has been named the winner of the prestigious Metropolitan Opera National Council Auditions. The 21-year-old D’Angelo, one of five winners from a pool of nine finalists, performed two arias with the Met Orchestra under the baton of Antony Walker at the Grand Finals Concert on the Met stage. Previous winners of the Met Auditions include many of the world’s great opera stars, such as Renée Fleming, Susan Graham, Thomas Hampson, and Frederica von Stade. In 2015, D’Angelo won both First Prize and the Audience Choice Award at the Canadian Opera Company Ensemble Studio Competition.

Soprano Chelsea Rus is the winner of the 2016 Wirth Vocal Prize, a new award given annually to an exceptional voice student at the Schulich School of Music of McGill University. The Master’s student from Abbotsford, British Columbia, won a $25,000 prize as well as performance opportunities including a recital at the Richard Bradshaw Amphitheatre at the Four Seasons Centre in Toronto. The prize is named for Montreal philanthropist Elizabeth Wirth, who made a $7.5 million donation to the Schulich School last year.

Opera.ca, the national association for opera companies and professionals in Canada, has awarded its National Opera Directors Recognition Award for 2016 to Bernard Stotland of the Opéra de Montréal. Stotland joined the company board in 2002 and was elected president in 2012. Among other initiatives, he designed and funded an opera education program for youth that has granted access to the final dress rehearsal of each annual production to over 6,500 students.

Andrei Bedros, director of the Montreal vocal ensemble Les Jongleurs, has received the Jean-Pierre Guindon Prize by the Quebec Choral Alliance. Originally from Romania, Bedros arrived in Quebec in 1979 and has directed the choir for over 35 years.

The four winners of the Molinari Quartet’s sixth International Composition Competition come to Montreal this May to work with the Quartet. The winners, selected by composers Ana Sokolović and John Rea and the musicians of the Quartet, include Liliya Ugay (Uzbekistan), Gianluca Castelli (Italy), Jean-Patrick Besingrand (France), and Montreal-based Bulgarian-Canadian composer Alexandra Fol.

Kim Gaynor is the new General Director of Vancouver Opera. Gaynor comes to Vancouver from the Verbier Festival in Switzerland, where she has served as Managing Director for the past 10 years. Previous positions for Toronto-born Gaynor include Managing Director and Co-founder of Festival Retz in Austria; the Yehudi Menuhin International Violin Competition and Royal Opera House, both in London. In Canada, Kim Gaynor has worked with Les Grands Ballets Canadiens, The National Arts Centre Orchestra, and L’Opéra de Montréal. Vancouver Opera announced in June that it would be moving from a traditional season to a three-week spring festival.

Toronto Symphony Orchestra Maestro Peter Oundjian has indicated that he will leave the orchestra following the 2017-18 season. Toronto-born Oundjian has held the position of TSO music director since 2004.

Luc Fortin has replaced Hélène David as Quebec’s Minister of Culture and Communications. Mr. Fortin was previously in charge of Sports and Recreation.

And the nominees are …

The Berlin-based Classical:NEXT has included two Canadian companies in its nominations for its 2016 Innovation Award. The Art of Time Ensemble, founded by pianist Andrew Burashko, was named for its eclectic programming; and Tafelmusik was highlighted for its creative initiatives around recordings and marketing towards new audiences. Nominees were selected by a committee of 19 journalists and industry experts from 17 countries. The winner will be announced in Rotterdam in May.

Globe-trotting Maestro Yannick Nézet-Séguin is now recovering from surgery for an epigastric hernia. Nézet-Séguin underwent surgery at Penn Medicine in Philadelphia on March 14, the day after he conducted his Philadelphia Orchestra in Mahler’s Symphony No. 8. His recovery is expected to take three to four weeks and forced him to cancel engagements with Orchestre Métropolitain in Montreal, as well as the Berlin Philharmonic and cellist Yo-Yo Ma in Baden-Baden.

Good News for the Arts in Canada

It was good news for many of the country’s biggest arts and cultural institutions as the Liberal government unveiled its first budget, on March 22. The Canada Council, which provides funding to artists and cultural projects across the country, will see its annual budget of $182 million nearly doubled within five years. As was promised in the election campaign, recent cuts to CBC/Radio Canada will be reversed, with the broadcaster getting $75 million this year and $150 million in each of the following four years. Canada’s national museums receive an immediate $33 million, with $105 million over the next five years. Other winners include the National Arts Centre in Ottawa, with $114 million allocated in this budget for renovations; Telefilm Canada with $22 million more over five years; the National Film Board, which receives a $13.5 million boost over five years; and the construction of cultural and recreational centres in First Nations communities, with $76.9 million pledged over two years. The Liberals also revived the Trade Routes program, cancelled by the former Conservative government, which supports the promotion of Canadian artists abroad.

Following a 2014 referendum in which Quebec musicians voted to disaffiliate from the American Federation of Musicians (AFM), the Guild of Musicians of Quebec (GMMQ) has announced a new agreement in principle with the AFM, recognizing the special status of Quebec and its musicians. Under the new terms, the Guild will receive a reduction of almost half the cost of membership, without any reduction in services.