In 2019, Canadian women take the right to attend university for granted. Yet not so long ago our universities were for men only. McGill University first admitted women in 1884. Marie Sirois became the first woman to graduate from a francophone university – Université Laval – in 1904.

The bizarre nature of 19th-century arguments used against higher education for women are highlighted in Blue Stockings, by British playwright Jessica Swale, opening soon at Studio Jean Valcourt thanks to Persephone Productions. In the play, set in 1896, a pompous male Cambridge psychiatrist suggests: “A man who tills the fields all day hasn’t the capacity for mental taxation. Likewise, a woman who expends her energy exercising the brain does so at the expense of other vital organs. Women’s nerve centres are fragile and pressure may weaken them, leaving them unfit for motherhood.” (Given this logic, intellectual pursuits could put penises at risk, too.)

Swale dedicated Blue Stockings, her much-lauded first play, to education advocate and Nobel Prize winner Malala Yousafzai, who survived an assassination attempt by the Taliban in Pakistan in 2012. Blue Stockings was first produced at the Globe Theatre in London, England in 2013. Gabrielle Soskin will direct the Persephone production. She recently returned to the helm of the company she founded 20 years ago after a six-year hiatus during which Christopher Moore served as artistic director. Persephone remains a non-Equity theatre company and receives no government grants, so balancing the budget is a constant concern. But it has a loyal base of fans and patrons.

When I crossed paths with Soskin in a Westmount coffee shop this summer, she was bubbling with enthusiasm for Blue Stockings. We quickly fell into a discussion of what the term “bluestocking” meant to each of us. To Soskin, it meant being told by her mother, in London, England, in the 1950s: “Darling, I don’t want you to be a bluestocking.” The idea being that a university degree would harm her marital prospects.

I was surprised to hear that the term “bluestocking” had lingered on until the 1950s. To my mind it belonged to the 19th century when it was used to insult women like my maternal grandmother Beatrice Legge, an aspiring poet. While teaching school in northeastern Ontario, she supplemented her income by selling short stories and poems to local newspapers. (In those days newspapers prided themselves on being purveyors of literature as well as the news.)

Grandma’s double career ended when she married my grandfather in 1905. Married women were not allowed to teach. Her five children quickly depleted her writing time, ending her bluestocking days. But she lived long, preferred reading to cooking, and told deliciously spooky stories to her grandchildren.

Historically, the term bluestocking was derived from a name for a British literary salon led by Lady Elizabeth Montagu in the 1750s. At first, men were included. When a male publisher arrived wearing informal blue stockings, his faux pas was nabbed for a name: The Blue Stocking Society. In 1811, these early feminists were satirized in a comic opera titled M.P., or The Blue Stocking, with a libretto by Irish poet Thomas Moore (“The Last Rose of Summer”).

Soon the Blue Stocking Society became a movement pushing for the right to post-secondary education, paving the way for the suffragettes – and women who simply wanted to earn their own keep. (The invention of the typewriter, first patented in 1868, was another factor in economic liberation.) In the play Blue Stockings, Swale has set the scene at Cambridge University, when Girton College first allowed women access to study alongside men, although they were not yet given the right to graduate with a degree. One young woman wants to become a scientist, another, a doctor. The headmistress counsels “stealth” and diplomacy in forwarding their cause while another female staff member urges political action.

Soskin is a former John Abbott College drama teacher who founded Persephone Productions to improve the post-graduation employment prospects for her students. One thing that attracted her to the play was gender balance. There are ample male roles as well as female ones. “Swale makes a point of saying the men are not villains, just the young men of their time,” Soskin says. “They are deeply threatened by these girls out of fear of being unseated by them.” 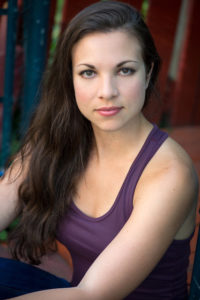 The role of globe-trotting Carolyn is played by Camila Fitzgibbon, a recent John Abbott theatre graduate. She has studied computer science and business and is the founding editor of the online publication, Montreal Theatre Hub. She also reports on theatre for the Global TV Morning News show.

Fitzgibbon swears she had never heard the term bluestocking before joining the cast, but she could be described as a modern version, still pushing the limits of her intellectual achievements. Born and raised in Brazil, she fully appreciates the educational opportunities she has found here.

The play’s portrayal of women forced to choose between love and knowledge strikes a chord with her. “Most of us have a choice today,” Fitzgibbon says. “But it still is a struggle.” She points out that all of the characters in the play are “very layered and multi-dimensional,” including the men. As for the women, “All they want is acknowledgement that they are equal.”

Although the push for equality in higher education by “bluestocking” women of the 1890s initially benefited the relatively privileged, the repercussions spread throughout society. Today women can become astronauts, doctors, theatre directors or college professors. But 125 years after women were first admitted to McGill, the gender pay gap remains substantial at some Canadian universities, both English and French, including the Université de Montréal.  Academic women still have reasons to sing the bluestocking blues.