Worth buying for the booklet alone.

A symphonic cycle from most composers marks a stately progress from imitative beginnings to a predictive summit. Think Brahms with all that Beethoven clutter in the first symphony and those weighty Mahler anticipations in the fourth. Well, Arvo Pärt is not quite like that. 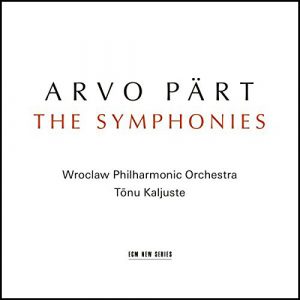 His first two symphonies, written in the mid-1960s, are set in Schoenbergian twelve-tone with a polyphonic overlay, an intentional affront to Soviet rule in Estonia. The third, dated 1971, marks his conversion to Russian Orthodoxy with voices from heaven, Bach chorales and other spiritualities. The fourth, dated 2008 and titled ‘Los Angeles’, is inscribed to Mikhail Khodorkovsky, the Russian business leader imprisoned by the Putin kleptocracy. It’s more of a mojita made with organic cranberries (yes, I know, no crannies in a mojita).

It goes without saying that the brave early symphonies are by far the more impressive. Pärt’s self-taught modernism allows him to keep a more open mind than western serialists. In the second symphony he toys with improvisation. He is a rebel, ready to embrace any cause so long as it is not totalitarian.

The third symphony is easy listening. The fourth is closer to mush. The performances by NFM Wroclaw Philharmonic and Tonu Kaljuste are plainly labours of love and ECM’s recording is immaculate.

Best of all, ECM have the last of the great booklet writers in Wolfgang Sandner. His notes are a model of useful information and analysis, avoiding the greasy sycophancy that soaks through most glossy booklets these days. I learned a lot, which I rarely do from new releases. Worth buying for the booklet alone.