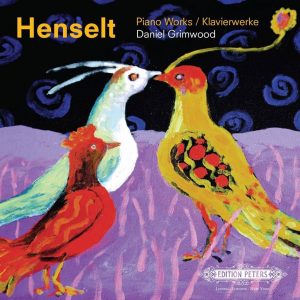 If there was an award for surprise of the year, this unpretentious release would win both the jury and the public vote. Adolph von Henselt, born 1814, was written off by music history as an also-ran, one of those stern faces in the back row of romantic group portraits, somewhere behind Chopin and Liszt.

Unable to make his name or much of a living in Germany, Henselt went off to teach in St Petersburg, where the Tsar added a ‘von’ to his name. His influence on Russian pianism is considerable – he taught Zverev, Rachmaninov’s teacher – and he still played more in Russia than anywhere else. That said, I cannot recall a major artist including his work in any recital or recording.

So along comes Daniel Grimwood, an English pianist, and blows the cobwebs away. A set of Henselt variations on themes from Donizetti’s L’elisir d’amore proves at once less showy and more appealing than Liszt’s extravagant suites on famous operas. A Ballade in B-flat major matches Chopin at just below his most poignant. An exercise titled “if I were a bird” could be Schumann on a good day.

If the styles mark Henselt as a man of his time, what of the content? There is an original mind at work in these pieces, lyrically fertile and often fresh. What it lacks is daring: Henselt is not a natural leader of trends but a follower of fashion. Very high fashion. The music is outstandingly well made and very tempting to play. Grimwood makes it sound much a whole lot easier than it could possibly be. He also makes me want to hear more. There’s a piano concerto that someone should dust off, and much else. One of the few musical gifts of a wretched 2016 is the chance to discover Henselt. Don’t let it slip.