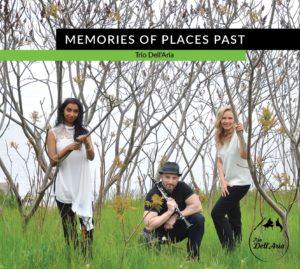 Trio Dell’Aria formed naturally through the performers’ love of chamber music works and experimenting with different musical sounds and timbers. The pieces in Memories of Places Past were chosen because of their incredible interlocking melodies that blend together as the musical stories unfold. The clarinet is ever-present,
and its compelling timbre acts as a foundation, which the other soloists can weave their musical magic.
The evening will be filled with food, fun and several mini-performances of works from the CD, not to mention
wine and mousseux. Non-alcohol drinks will also be available.

Louis Spohr’s Six Germans Songs, were composed in 1837 and were dedicated to Princess Caroline von
Schwarzburg- Rudolstadt (of Germany). At its premier performance, the clarinet part was played by Spohr’s
long-time friend and most famous clarinettists of the nineteenth century, Johann Simon Hermstedt. The pieces
are reminiscent of the cozy domestic ambiance of the middle-class salon or drawing room and are a throw-
back to the Mozart’s compositional style. The expressive background of the piano accompaniment creates a
beautiful canvas upon which the simplistic beauty of the vocal line and the delightful Romantic sonority of the
clarinet have been laid.

Frank Horvat’s Memory of a Place Past – St. Joe’s, (2016) explores the relationship of the composer’s
lingering memory of an event that left him with personal feelings of guilt and shame. The soprano’s use of only
syllables represents how the event and memory were kept inside, and the effect of not sharing the secret with
others. The clarinet and soprano are almost always in unison, attempting to convey a reinforced emotional melody and almost in essence, creating a new instrument. The piece starts aggressively and gradually works
its way to an uneasy calm. The memory always appears at first with initial shock and then it fades away into an
uneasy calm.

Colin Eatock’s Ashes of Soldiers (2010) is dedicated to the composer’s father, Alan James Eatock, who was
a soldier. The piece is in two movements: the first is for clarinet and piano; in the second, a soprano is added
to the instrumental duo. Thematically, the two movements – which are performed without pause – are closely
related. The second movement a continuation and development of the musical ideas introduced in the first.
The text is based on a poem of the same title by Walt Whitman, from his Leaves of Grass. Despite the poem’s
specific setting in Civil War era USA, its theme is universal: the commemoration of all soldiers who have died in
battle, regardless of their allegiances.