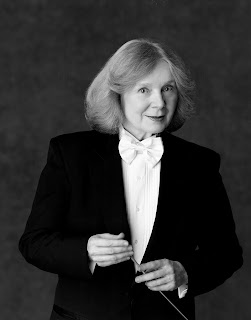 Summer has traditionally been a quiet time musically in Toronto, with the opera, symphony and ballet all in hiatus. The little bit that were available – like the Toronto Symphony Orchestra at Ontario Place and the Canadian Opera Company’s Altamira Harbourfront Concerts, have long been consigned to history. Music-starved Torontonians, myself included, have had to venture out of town for our musical fix, to places like Elora, Parry Sound, Campbellford, Sharon, Niagara for example. While many of us continue to do that, those who would rather stay in town can still experience great music in our own backyard, in the form of the Toronto Summer Music Festival (July 20 – August 14). Thanks to the good work of conductor Agnes Grossmann, the TSMF has enriched the musical life of Toronto immeasurably the past five summers. I am a little sad to report that Grossmann is bidding farewell to Toronto and the Festival this summer. It was announced on June 8 that she is leaving her post as Artistic Director at the end of this season. She will be replaced by violist Douglas McNabney, who was Artistic Director of the Domaine Forget International Festival from 2001 to 2005. McNabney is also Chair of the Performance Department of the Schulich School of Music at McGill University, where he is presently Associate Professor and Coordinator of Chamber Music.
Undoubtedly there will be changes at the TSMF with a new Artistic Director. But we can be assured that it will continue its tradition of making beautiful music in the heart of our city in the future. In the meantime we can enjoy Grossmann’s last season with its interesting lineup of concerts featuring international artists. The Opening Night Concert has always been a “blockbuster” and this year it will be pianist Anton Kuerti playing Schumann. This opening event was at the Carlisle the last two years, but this year it will take place in the visually and acoustically superb Koerner Hall of the Royal Conservatory of Music on Tuesday, July 20 at 8 pm.
This being a Mahler year celebrating the 150th anniversary of his birth, we can look forward to a feast of his music. The Vienna Piano Trio will be in town for Mahler And Friends, a program of Mahler and his contemporaries – Alexander Zemlinksy and Arnold Schoenberg on Saturday, July 24 8 pm at Walter Hall. The Vienna Piano Trio will also be giving a masterclass on Friday July 23, in Room 330 at the Edward Johnson Building, Faculty of Music from 3 to 6 pm.
Among the many highlights is the great German baritone Matthias Goerne appearing in a liederabend of Schumann and Brahms on July 27 with Andreas Haefliger at the piano. Goerne will also give a masterclass the next morning from 9:30 am to noon at the Geiger-Torel Room at the Faculty of Music. Andrew Burashko and the Art of Time Ensemble will offer Musical Transformations Erich Korngold: Source and Inspiration – a program of the music of this rarely heard Austrian composer on July 29 at Walter Hall. The centerpiece is the Suite Op. 23 for Two Violins, Cello and Piano. This piece inspired the creations of the six songs on the program by Martin Tielli, John Southworth and Danny Michel. Finally, the most significant concert of the 2010 TSMF is Song of the Earth, the farewell concert of Agnes Grossmann. On the program is the chamber version of Mahler’s Das Lied von der Erde, performed by Romanian mezzo Roxana Constantinescu and Canadian tenor Gordon Gietz. Also on the program is a chamber piece by composer Glenn Buhr, Red Sea. Buhr “offers his reflections on the timeless subjects of the earth, nature and the intricacies of life.” The concert takes place at the MacMillan Theatre on August 7, 8 pm. For full program and ticket information, go to http://www.torontosummermusic.com/index.php?option=com_content&task=view&id=12&Itemid=27