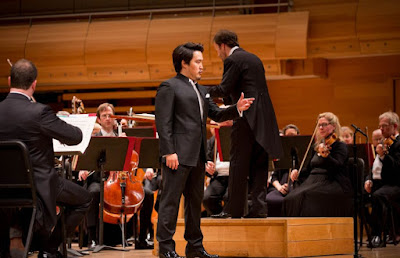 The second night of the Finals of the 2015 Montreal International Musical Competition began with the anticipated Canadian soprano France Bellemare, whose semifinal performance of Dvorak’s Song to the Moon reminded me of 2007 MIMC winner, Canadian soprano Marianne Fiset’s simple regal stature.
Unfortunately, Bellemare was plagued by strained high notes as she has a tendency of lifting her head and tilting it to the right to sing anything above a high F as she did in “Je dis que rien ne m’épouvante” from Bizet’s Carmen and “Porgi amor” from Mozart’s Le nozze di Figaro. It would not be worth mentioning but the mannerism produced strident “old lady” high notes, which detracted from her musical line and characterization. In her middle range when she kept her head looking forward, she produced lovely round tones that she showed off in Mimi’s aria from Puccini’s La Boheme and Rachmaninov’s “Ne poy krasavitsa, pri mne.”
Japanese baritone Takaoki Onishi had me captivated in his opening Mahler Lieder eines farenden gesellen, at least in the first three songs. Unfortunately, he over sang in the dramatic third song (two phrases contained sustained high Gs), and his intensity faded in the fourth song. It went downhill from there. In the next aria from Mozart’s Cosi fan tutte, he came in early and he cracked towards the end. His aria “Mein Sehnen, mein Wähnen” from Korngold’s Die tote Stadt was sustained with a lovely legato, but he cracked again at the high notes. Too bad, as I sensed a good musician here.
Korean tenor Keonwoo Kim showed that it’s how you finish that counts. In the semifinals, his first two pieces were forgettable, but he wowed the audience with strong performances in the operatic arias. Tonight, he began with an uninspired muted performance of “Comfort ye … Ev’ry valley” from Handel’s Messiah. He began the recitative of “Je crois entendre encore” from Bizet’s Pearl Fishers strongly but sang most of the aria tentatively as if worried about the final high note, much as a figure skater prepares for a “quad.” When he hit the sustained high C on the final “charmant,” you sensed that he found his confidence; the remaining three arias were going to be his playground. Kim showed that Rossini is right in his wheelhouse, making short work of “Principe piu non sei … Si, ritrovaria io guiro” from La Cenerentola climaxing with an excellent money note. He then made sweet music with “Ah, leve-toi soleil” from Gounod’s Romeo and Juliet before concluding with “Favorita del re… Spirto gentil” from Donizetti’s La favorita. With the exception of the Messiah air, Kim’s performance has the musicality and polish found in a professional recording; his timbre reminds me a bit of Jussi Bjorling’s.
Here are the final results:
Read:
Watch: