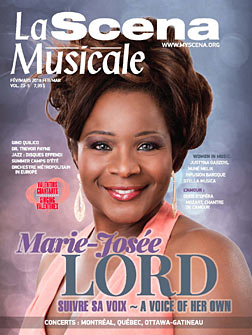 What you missed: Alternating between the world of dreams and real life, the opera’s story is based on the final night of American president John F. Kennedy’s life spent at the Hotel Texas before he was assassinated on November 22, 1963.

Musically, the most memorable lyric moment came in the Jackie and Jack “Love duet,” while Jack is having nightmares on a bad morphine trip, he catches a break when he starts dreaming about Jackie. The orchestration is unparalleled at that point, as we feel transported musically into the world of dreams. The staging is also beautiful, as it displays a surreal yet romantic view of planet earth in the background, behind both characters. Vocally, the star of the show was Canadian baritone Daniel Okulitch who was hilarious as Lyndon B. Johnson. In the opera, he is portrayed as a somewhat parody of a red neck-macho from Texas. Another singer worth of mention was Colin Judson who played the Soviet statesman Nikita Krushchev. He managed to sing an almost impossible score that consisted of a nonsense flurry of high notes and declamations.

In a way JFK is a very American stereotype kind of opera. It is not afraid of adding unnecessary politically incorrect comments. We feel as if we are watching an opera based on comic-book characters visually inspired by Marvel combined with the humour from cartoons such as Family Guy or The Simpsons. It’s a guilty pleasure type of opera, comparable to eating a huge Tex-Mex taco in one of those popular food trucks at 2 am, while adding caviar on top and drinking Champagne.

Gripes: The main character “Jack” didn’t have the vocal material that one would expect from a charismatic politician. However that might be just what the composer wanted.

The opera was too long, we had to wait almost 2 hours before the first intermission break.

Too many nonsense high notes for the male voices in general. It made it feel like a circus more than a work of art. AR

What you missed: Marc Hervieux presented mostly Christmas classics such as Minuit Chrétien, Sainte Nuit, Panis Angelicus, using his resonant voice with ease and nailing every note. Under choirmaster Philippe Bourque, the St. Lawrence Choir’s performance of “Magnus Misteryum” for a capella choir was the jewel of the night. It had unconventional harmonies and delicious nuances.

Gripes: Hervieux introduced all the pieces in his usual nonchalant way, reminiscent of a loud uncle who tells bad jokes during holiday dinner. The Audio quality left a bit to be desired, the microphone didn’t capture all the rich harmonics of Hervieux’s voice and made it sound unnatural. The show missed a sense of rhythm. AR

With Kent Nagano and the Montreal Symphony abandoning the annual Handel Messiah, two Montreal organizations took different approaches to filling the gap last Christmas. On Dec.1, the McGill Chamber Orchestra presented Pierre Audet’s La Résurrection de Monsieur Händel, a dramatization on the composition of the masterpiece with performance of selections of Messiah, at the St-Jean-Baptiste Church, one day after their annual sold-out complete Messiah at Church of St. Andrew & St. Paul with the same musicians. The change in venue and “work” was meant to reach out to the francophone community. Dramatically, Luc Guérin’s recitation was interesting and funny, but the presentation was marred by acoustics: the amplification was insufficient for the cavernous 1500 seat church, as only those in the front left side laughed throughout the evening to the nuance of the text. Musically, Boris Brott made the McGill Chamber resonate in St-Jean-Baptiste, and countertenor Daniel Taylor’s two arias made you wanting more, and soprano Helene Brunet was sufficiently transcendent that I wished I would have heard “I know my Redeemer Liveth” if Audet hadn’t cut it to keep the show to one hour and 15 mins without intermission. This dramatization is worth trying again but in a better/small hall.

Fresh off their successful European tour and scheduling on the weekend before Christmas created a perfect storm of winning conditions to help Yannick Nézet-Séguin and the Orchestre Métropolitain sell out Maison Symphonique for two performances of the complete Handel’s Messiah (Dec. 22 and 23) even with surge prices going up to $200; the OM should easily have cleared $300k. Judging from the mere handful of audience standing for the Hallelujah Chorus, the 4000 in attendance were mostly francophones, showing that there is a market for Messiah in Montreal. For his first Messiah, Nézet-Séguin did an admirable job sustaining the intensity and melody of the work, despite a couple of questionable tempos. The predominantly francophone OM Chorus surprised with their tone and facility with the English score, although a couple of phrases lacked the closing consonants. Yannick assembled a solid international cast of soloist but the balance amongst the voice was not uniform. It was Canadian bass-baritone Stephen Hegedus who shone, with fine work from Canadian tenor Pascal Charbonneau and English Carolyn Sampson. French countertenor Christophe Dumaux gave a solid steely sound but at times, it felt like he was reading the score. Performance 9/10 WKC