Established from an initiative by Mayor Jean Drapeau 52 years ago, Les Concerts Populaires de Montreal strives to present high-quality classical music to Montreal citizens. Now a bulwark of arrondissement Hochelaga-Maisonneuve’s summer season, Les Concerts Populaires, in collaboration with the Comité Musique Maisonneuve, offers five star-studded selections in the shadow of the Olympic tower at the Centre Pierre-Charbonneau. This year, their normal Thursday night schedule is interrupted by the 2016 Jeux du Québec, so it is more important than ever to plan your musical evenings.

The eclectic series embodies a true democratization of music. On both evenings the atmosphere was congenial, with the performers ignoring the presence of the fourth wall, reaching out to the audience beyond the dictates of tradition. For their part, both audiences were warm and responsive, calling back both groups for not one, but two encores.

By popular demand, all five concerts this year feature orchestras; Les Concerts Populaires scrounged up an extra $50,000 this year to fund the initiative. The opening gala of musical theatre hits featured La Sinfonia de Lanaudière under Stéphane Laforest, who will return on August 2 with Marc Hervieux for a carte-blanche potpourri. On July 12, Valérie Milot and Antoine Bareil were backed by an 18-member pickup chamber orchestra. The following concert on July 28 will feature the Orchestre de la Francophonie directed by Jean-Philippe Tremblay and the series closes on August 4 with Yannick Nézet-Séguin’s Orchestre Métropolitain. 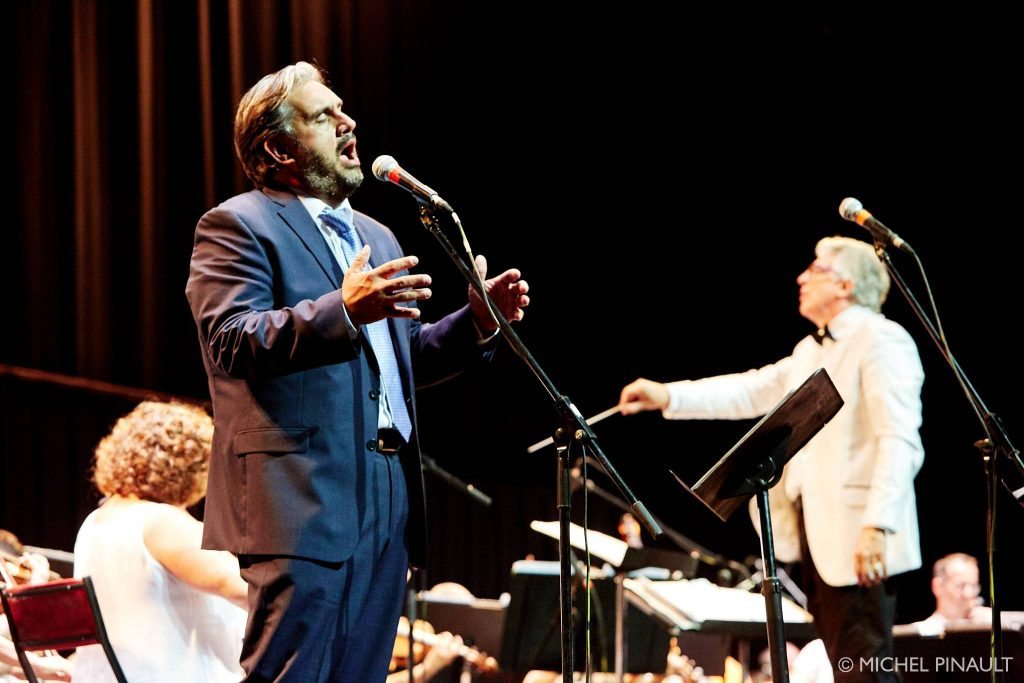 On July 8, Les Concerts Populaires 2016 kicked off with several of the most popular tunes on the theatre stage from New York to London, Paris to Montreal. Stéphane Laforest and La Sinfonia de Lanaudière were joined in the bilingual presentation by tenors Marc Hervieux, Robert Marien, mezzo-soprano Stéphanie Bédard, and soprano Geneviève Charest.

Hervieux, who is also intimately involved in the planning of the entire concert series, opened up the evening with “Maria” from Leonard Bernstein’s West Side Story (1957), approaching the character piece with a gallant sentimentality befitting of the piece’s long musical lines. He returned to the stage later in the concert for good-natured performances of “If I Were a Rich Man” from Fiddler on the Roof (1971) and “Esmeralda” from Notre-Dame de Paris (1998). 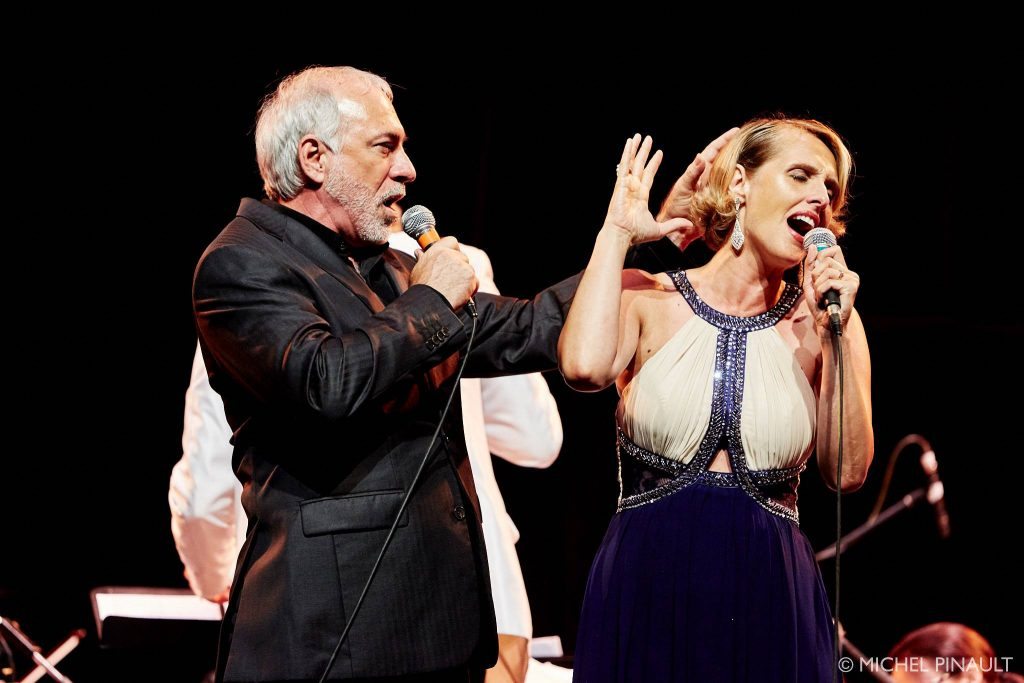 The homage to Bernstein continued with a an animated rendition of “I Feel Pretty” by Geneviève Charest, who also gave a stunning performance of Fantine in “J’avais revé” from Les Misérables (1980) and Christine in “Phantom of the Opera” (1986), opposite Robert Marien’s Phantom.

Marien also hammed it up with Hervieux as the bumbling Don Quixote and the slightly-less-bumbling Sancho in “I, Don Quixote” from the Man of La Mancha (1964). He reprised the role in a rousing “La Quête.” By far Marien was the most brilliant as Jean Valjean in “Comme un Homme” from Les Mis, with an affected, wistful tone that never crossed the border into artificiality and camp, a dangerous territory for musical theatre, especially in concert galas. 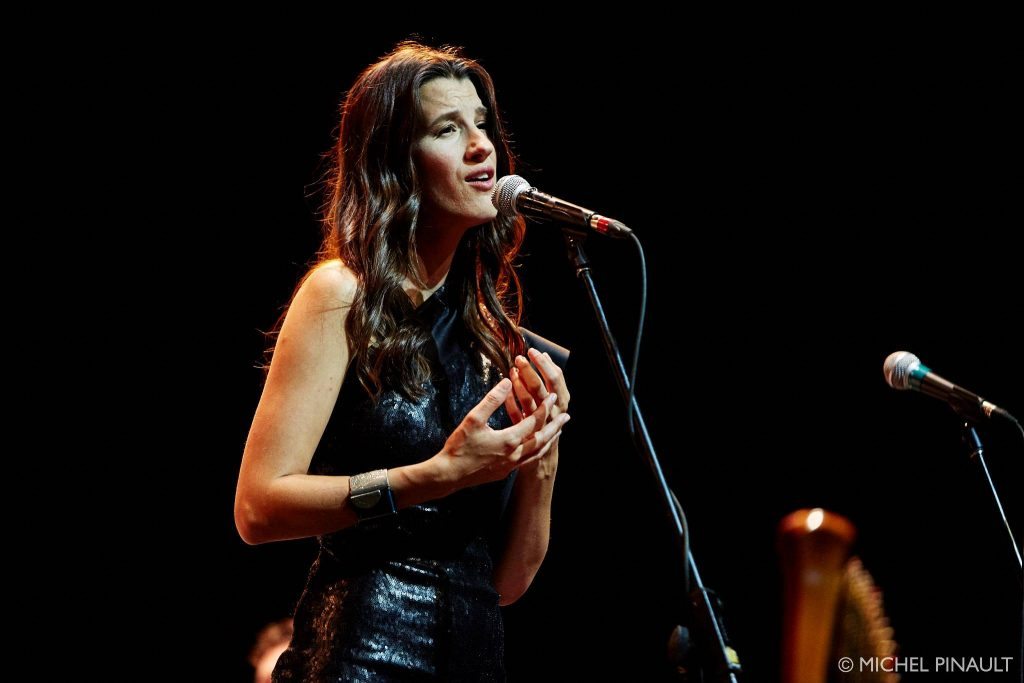 The standout star of the night was Stéphanie Bédard, who was featured on the first season of French television competition The Voice : la plus belle voix. Bédard favored songs from the francophone hit Starmania (1976), giving a toe-tapping performance of “Naziland” and a stirring rendition of “Le monde est stone,” which earned her a mid-concert standing ovation from a significant portion of the audience.

Stéphane Laforest’s Sinfonia de Lanaudière handled the arrangements with poise, often standing in as rock bands from the original arrangements, other times dipping into jazz-inflected rhythms and harmonies. Their energy was contagious, causing the audience to call the soloists back for two encores. Ending on a high note, the second encore led to a cheeky adaptation of “Do, Re, Mi” from The Sound of Music, where our four stars cajoled the insatiable audience into participating. 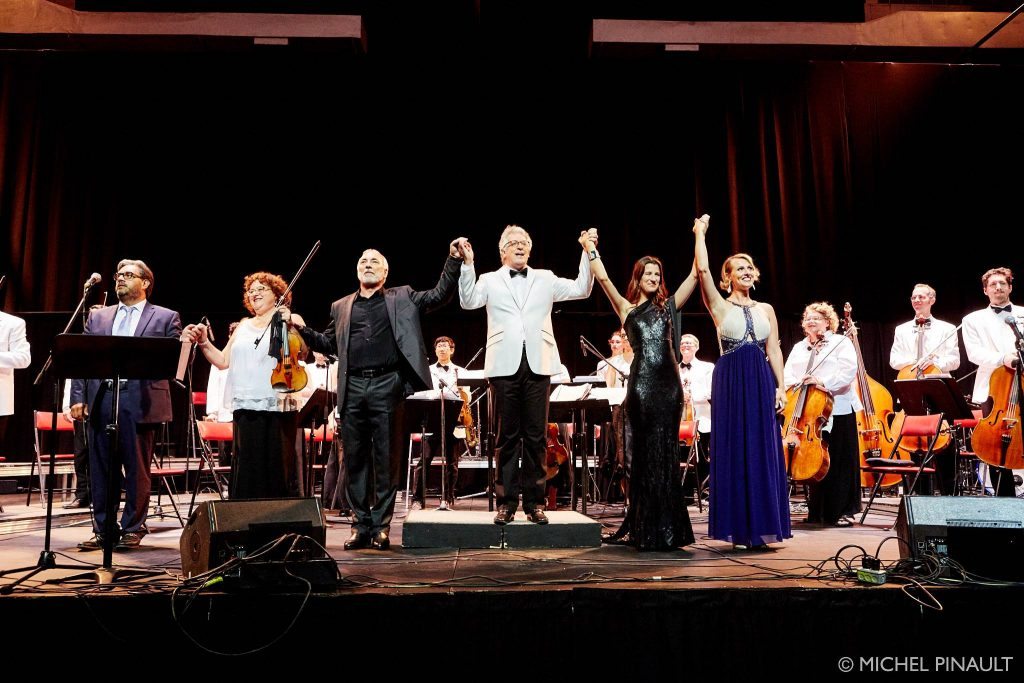 Quebec darlings Valérie Milot and Antoine Bareil returned to their Simon & Garfunkel project on July 12 (released in 2011 by Analekta), augmenting their tribute to the masters to include an 18-member chamber orchestra. The evening was certainly pleasant, combining fan-favourite melodies with some of the more forgotten corners of Simon & Garfunkel’s discography, arranged masterfully by Bareil. 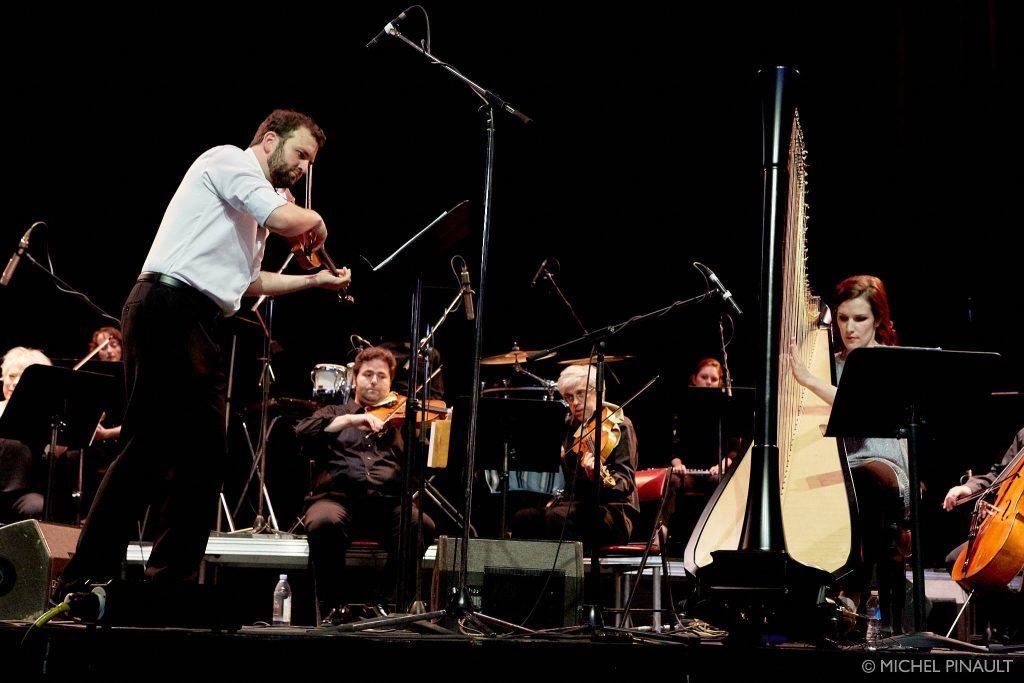 Bareil, who is the concertmaster of the Orchestre symphonique de Laval and a member of Quartango, was effectively the leader of the ensemble, who braved forward through difficult swing and bossa nova rhythms as well as many tempo modulations without a conductor. Fresh off of the release of her album Orbis with Les Violons de Roy, Milot—who is quickly gaining the reputation of Canada’s top harpist—was the solid rock of the ensemble, with her versatile instrument alternatively filling the role of guitar, bass, piano, percussion, and voice. 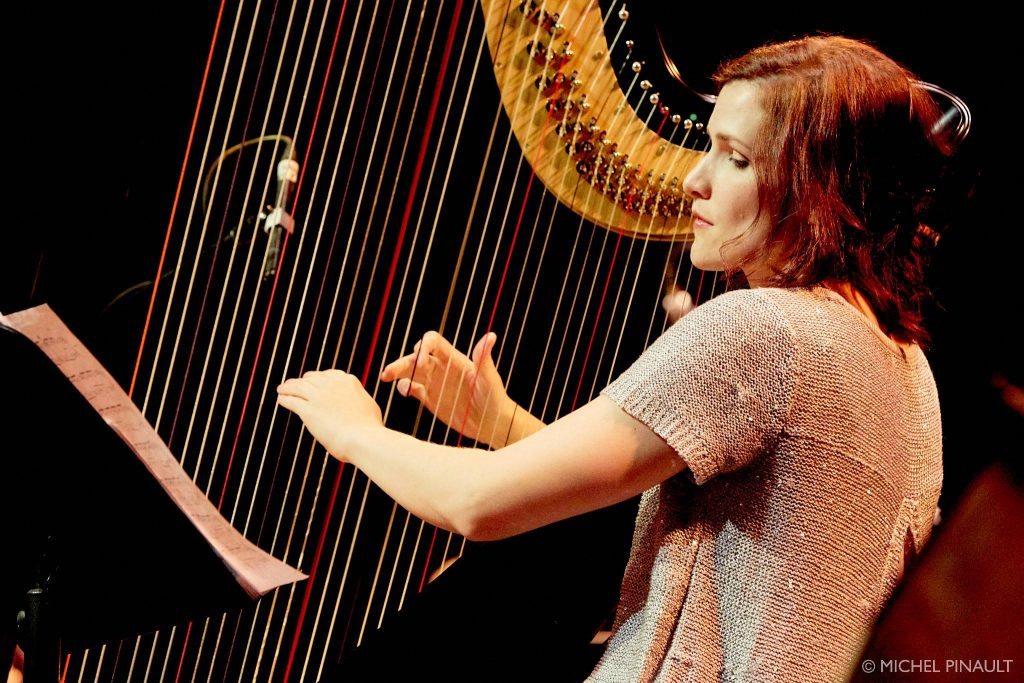 The challenge of the transcriptions, explained Bareil, was to transform the ubiquitous story-based, repetitive vocal music of Paul Simon and Art Garfunkel into instrumental versions that both remained faithful to the spirit of the original versions while adding intrigue through innovation and variation. Bareil added cheeky fugal imitation in “Woman” by Shawn Phillips and a celtic Cèilidh in “Peggy-O,” while “So Long, Frank Lloyd Wright” became a more out-and-out bossa nova, and the ever-enduring “Mrs. Robinson” was transformed into an ostentatious swing tune.

Bareil’s own “Malt” was inspired by Paul Simon’s interest in ancient music, and Milot gamely portrayed a hurdy-gurdy in the piece that seamlessly travelled backwards and forwards through time. The concert itself was based on a theme of time travel, from the intergenerational orchestra on stage to the songs that remain culturally relevant for all ages, even years after their composition. Songs such as “For Emily, Whenever I May Find Her,” “El Condor Pasa,” “Scarborough Fair,” and “The Sound of Silence” were given new life, mixing familiar and unfamiliar by pushing the boundaries with modal modulations. 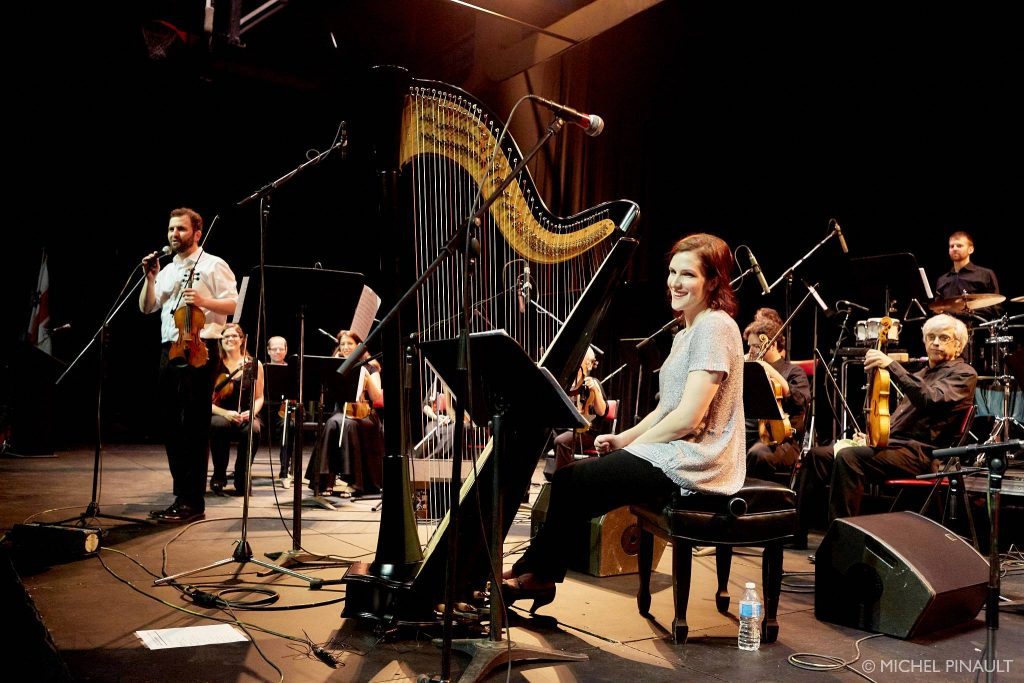 The appreciative audience called Milot and Bareil back twice. They were prepared for the first encore with “Bridge over Troubled Water,” and gave into the demands of the people with a second rendition of “Scarborough Fair.”

Three concerts remain in the 2016 series; due to the interruption from the games, the next concert, “L’Of et Tremblay : c’est la fête!” with Jean-Philippe Tremblay and the young Orchestre de la Francophonie, is in two weeks on Thursday, July 28 at 7:30.