You are at:Home»Classical Music»This Week in Montreal (February 22–28)
Advertisement / Publicité

Series at the Chapelle Historique 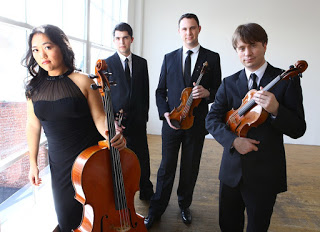 On February 28, the spotlight passes to the Calidore String Quartet, winners of numerous prestigious competitions. The quartet was created in 2010 by young musicians at the Colburn Conservatory of Music in Los Angeles, and has now settled in Manhattan. In 2013 it took part in McGill’s International Academy, prompting critic Claude Gingras to speak of a revelation and entitling his article “The Calidore, the absolute summit”. On the program: Haydn, Mendelssohn and Debussy. Pollack Hall, 3:30 pm.  www.lmmc.ca

For the Arte Musica evenings, Bernard Labadie is offering his own transcriptions of major works by Bach. Bourgie Hall, February 26, 7:30 pm. www.violonsduroy.com

I Musici: From Darkness to Light

I Musici will take part in the Montréal en lumière festival, playing Shostakovich’s penultimate symphony and leading up to poems narrating the final days. To get to the light, we’ll hear Haydn’s bright Symphony No. 45 (“Farewell Symphony”). At the end of this work, musicians will leave the stage and blow out their candles. Only darkness will remain. Jean-Marie Zeitouni, conductor, Andrew Foster-Williams, bass-baritone, and Dominique Labelle, soprano. Bourgie Hall, February 25, 8:00 pm. www.imusici.com/en

In celebration of Hebrew identity, the Orchestre Métropolitain presents works by Prokofiev, Bruch, Bloch, and H. Oppenheim with the Magillah ensemble and the talented cellist Yegor Dyachkov. Airat Ichmouratov, conductor. Maison symphonique, February 28, 3:00 pm. This concert will be presented in two boroughs on February 25 and 26. www.orchestremetropolitain.com

Pianist Louise Bessette will prepare a light, dazzling evening with four piano cycles and multiple influences. John Rea’s Las Meninas, commissioned by the SMCQ, variations on Kinderszenen by Schumann, and Monodias Españolas by José Evangelista are some of many works on the program. Conservatoire concert hall, February 28, 3:00 pm. www.smcq.qc.ca

The orchestra of Université de Montréal, conducted by Jean-François Rivest and the opera workshop of UdeM, directed by Robin Wheeler, present Mozart’s Le Nozze di Figaro. This opera-bouffa is “more than a work of commedia dell’arte,” says Rivest. One can experience this Crazy Day of Beaumarchais, staged by François Racine at salle Claude-Champagne, February 25-28, at 7:30 pm. www.calendrier.umontreal.ca