You are at:Home»La Scena Online»Interviews»City of Memories in Old Montreal

Old Montreal is currently the site of an international premiere: the advent of the world’s largest permanent multimedia projection exhibit. Cité-Mémoire (sometimes translated as Memory City) is a series of walking tours featuring 19 ­animated scenes that bring to life some of the ­characters who made the city’s history. Recall key moments about Montreal via a free mobile app. La Scena Musicale spoke with two of the architects of this tribute to Montreal’s 375th anniversary.

“The original idea was to create an event to ­celebrate Montreal’s anniversary every May 17,” says Martin Laviolette. The executive director and ­producer at Montréal en Histoires is emotional as he recalls the details of the eight years of planning necessary to bring forth this brand-new techno-history for the 375th anniversary celebrations in Montreal. In fact, the excitement surrounding the preparations for this major milestone helped accelerate the ­realization of the project, which endured multiple changes in federal and municipal government.

Laviolette says that the choice of artists was born of “professional love at first sight” with creator-producers Michel Lemieux and Victor Pilon. Moreover, the ­partnership brought the “historic event in a contemporary context” back to the motive that inspired the team all along. The objective: to give Cité-Mémoire an ­innovative and unique character. Lemieux and Pilon stated at the project’s launch that they wanted to “bring out the soul of the characters who built and inhabited this ­curious, diverse, sensitive, and ­intelligent city,” and especially to ­“celebrate each and every person’s connection with our history.” 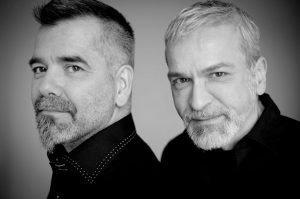 Dramaturge Michel Marc Bouchard joined the two artists to form an illustrious trio. “Thanks to the international renown of these three artists, we didn’t have to do much to convince the financial backers,” says Laviolette.

He observes that the nightly turnout thus far has been enthusiastic. “The success of this new project means that we can already start thinking about international opportunities,” he affirms. “We are currently being approached by several cities who are interested in the project.”

Combining the spectacular and the intimate

“We brainstormed the project while walking the streets of Old ­Montreal and contemplating its walls and façades, especially blind walls – those that have no windows or doors and are usually unlit, and therefore, rarely looked at. However, these are load bearing walls…the load being history,” says Lemieux. He recalls how he and Pilon had the idea to make these blind walls come to life with the souls of the people, ­famous or not, who made Montreal’s history, and proceeded in such a way that “the memories of these builders come off the walls to tell us bits of the city’s history.”

“We wanted something that opened a door to history and led to reflection,” continues Lemieux, “projections that allowed us to combine the spectacular with the intimate. The history of Montreal was whispering in our ears. We wanted people to understand that history isn’t just a dusty old book and that they themselves are part of history.”

This philosophy sums up the trademark Lemieux-Pilon, two creators who, according to those in the industry, are leading a revolution in the world of multimedia design and performance. One eloquent example is their piece TORUK, which was inspired by the film Avatar and created for the Cirque du Soleil. It is now on tour across the U.S.

Carte blanche for an ­alternative view of history 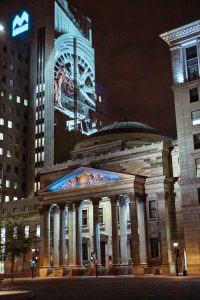 Quebec playwright Michel Marc Bouchard was the obvious choice to write the scripts for this project, which incorporates and transcends many disciplines including history, theatre, media arts, and literature.

“Michel Marc Bouchard’s love of history, his interdisciplinarity, and his great narrative finesse meant that he was the ideal choice to give the project’s text the depth and the scope necessary to add a human touch to the historic facts, to adapt history to the present reality, and to take inspiration from the future,” says Lemieux.

There were obvious difficulties to overcome, however. “We know that not everyone is interested in history, especially young people,” says Lemieux. “But it is possible to kindle interest for historical facts through the use of multimedia.” He cites the enthusiasm that young people have for video games that deal with, among other subjects, the Second World War.

Of course, despite the intellectual, technological, and financial challenges, this ground-breaking project couldn’t have come into being without the latitude necessary for the creative spirit to express and itself and realize its full potential.

“We were given carte blanche, complete liberty to create this innovative project,” affirms Lemieux, stressing that in such projects – like the one that he and Pilon created at the Cirque du Soleil – “can’t flourish unless the artists have complete liberty of action and inspiration.” Otherwise, success will be jeopardized.

“Of course, you need to stay on budget and be realistic,” adds the man who considers himself privileged to contribute to this great premiere. This project confirms Montreal as a leader in the domain of urban projection. After the success of Cité-Mémoire Lemieux states that he “will definitely make little ones here and elsewhere.”

Montréal en Histoires presents Cité-Mémoire, an interactive multimedia experience showcasing the history of our city. The exhibition runs until 2019, eleven months out of the year, from May 18 to September 17 (until midnight) and from September 18 to April 16 (until 11PM). The displays are spread across a 5 kilometre circuit and are projected onto the stone masonry, the soil and the trees of Old Montréal.

To fully enjoy and benefit from this immersive multimedia experience, you should download the free Montréal en Histoires app for mobile phones and tablet devices. You’ll also need to have your headphones handy. The soundtrack and historical background information are available in four languages (French, English, Spanish and Mandarin). Users are prompted to connect to WiFi MTL free of charge.

The app allows the user to create their own customised path, choose from 30, 60, or 90-minute walking tours or just simply follow the random, more impromptu, map to immerse yourself in each of the projections, which last from six to eight minutes. The app offers both day and night tours. The evening route incorporates the more nocturnal tableaux of Cité-Mémoire.

In 2017, in addition to the 19 currently available, four new tableaux will debut, including one that is 22 minutes in duration; you’ll find them projected onto the stone wall of the municipal courthouse overlooking Champ-de-Mars. 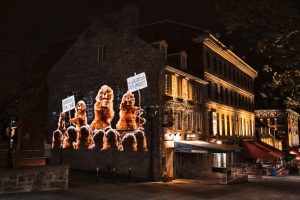 The itineraries also allow participants to experience “augmented ­reality” which consists of superimposing two-dimensional or three-dimensional virtual images onto real world objects, further informing our experience as well as altering our perception of reality. Locations that feature augmented reality are identified by the colour-coded boundaries in Montréal en Histoires, as well as in the app.

The lighting adjusts automatically from the beginning of the ­projection depending on the light levels in your surroundings. The ­average length of time needed to comfortably view all of the tableaux is about four hours. The self guided tour can be done in two stages. Any number of people can watch the same display concurrently. Once you are in the right location, the app connects directly to the ­projection system which triggers the film and its soundtrack. And after viewing the vignette, the app offers the user an option to obtain more ­information about the historical context.

The app also provides access to the augmented reality feature as well as supplementary information on other historic sites that are not part of the tour, such as, for example, Notre-Dame Basilica.