Tapestry Opera continues its tradition of bringing new work to the stage this spring with a full production of The Overcoat: A Musical Tailoring. Based on The Overcoat, a successful play of 1998 which in turn was based on the classic tale by Nikolai Gogol, this opera features a score by James Rolfe and a libretto by Morris Panych.

The opera is a product of Tapestry’s LibLab, a program that pairs leading up-and-coming composers with the most exciting librettists working in Canada today. Panych and Rolfe were paired up in 2014; the playwright came up with the idea of reworking his wordless theatrical version of The Overcoat. 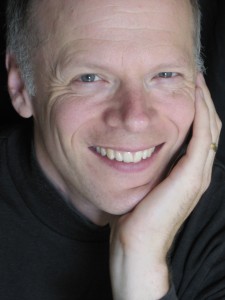 Rolfe was aware of the 1998 production but hadn’t seen it, which he thought of a blessing.

“I had no preconceptions of what the work had to be like,” he said in a phone interview. “We created a few scenes that are actually still in the finished opera today.”

Hailed as an “elegant expression of accomplished theatricality,” Panych’s 1998 production is getting the operatic treatment in both Toronto and Vancouver as a co-production with Canadian Stage and the Vancouver Opera.

Originally conceived as a “movement piece” with choreography by Wendy Gorling, The Overcoat: A Musical Tailoring is the show’s next incarnation.

Along with Rolfe, the project reunites the original 1998 creative team as well as 11 singers, two “movers” and a chorus. According to Rolfe, it’s a very kinetic show. “I think of it as a ‘dance opera.’ It’s definitely not park-and-bark.’”

Known for his previous work involving intense movement (Against the Grain’s Messiah, TSO’s The Seven Deadly Sins), baritone Geoffrey Sirrett plays the title character who dons the eponymous topcoat. Sirrett first got involved with The Overcoat during its third workshop at Tapestry.

“We started playing around with the physical theatre aspects,” he recalls during a rehearsal break. “Now we’re a couple weeks into rehearsal and it’s going really well.

“I play Akakiy Akakiyevich, who is an accountant fascinated with numbers. He’s living in an internalized world that starts to crumble. He then buys this new overcoat to replace his old one, and all of a sudden his life changes drastically.”

The show is about “an ordinary person who becomes an overnight sensation” describes Rolfe, “he gets carried away and suffers the consequences.”

Rolfe describes The Overcoat as a very contemporary piece in which something that promises comfort takes on a life of its own. “He gets carried away and suffers the consequences,” Rolfe says of the central character.

Rolfe has precise ideas about what goes into writing an opera. “Opera is great at showing emotions and feelings,” he says. Considering the original work was a movement-only piece, the composer had the freedom to let his score tell the story.

Music sets both the tone and the pace. Rolfe describes his score as “motoric” and rhythmically challenging. The story moves quickly. Rolfe views the show as an expression of movement, not just sound.

“The protagonist is a bit of a ‘schlemiel’,” Rolfe adds. It was important to give him music that lets the audience empathize with him. “He’s an easy guy to caricature, but I wanted him to be more real.”

Rolfe describes the music as having the “flair of opera” with the occasional “Broadway feel.” There’s a quotation from Mozart and traces of pop and East Indian music.

Rehearsing with the creators in the room is a luxury.” “It’s an incredible opportunity,” Sirrett says. “There’s so much more insight.”

Sirett says that the creators are very open to feedback. “We’re able to rework things in the room.” Both Gorling and Panych were willing to “start from scratch” and explore the drama in a “naturalistic way.”

According to Sirrett, The Overcoat: A Musical Tailoring bridges the gap between opera and musical. “James Rolfe has such a unique voice. His music is extremely economical. He I able to distill musical ideas down to what is absolutely necessary and nothing more.”

“At times the music has complexity to it, but there’s nothing superfluous,” Sirrett says. “That doesn’t mean that it’s minimalist.

“But it’s definitely ‘Rolfian.’ He writes very well for the voice.”

The Overcoat: A Musical Tailoring plays at the Bluma Appel Theatre in Toronto from March 29 to April 14 before heading west to Vancouver where it will be part of the second annual Vancouver Opera Festival. The show will play in Vancouver April 28, 29, May 2, 4-6, and 9-12.
www.tapestryopera.com
www.vancouveropera.ca