REVIEW: of Ellen West (the world premiere of a new work by Ricky Ian Gordon and Frank Bidart); and La fille du régiment (a new production of Donizetti’s 1840 comic opera).

Opera Saratoga inaugurated its summer 2019 mainstage series on June 29 and 30 – the same weekend as the highly-touted “WorldPride 50” celebration. The latter event, of course, originated as homage to the purported founding moment of the modern gay rights movement; but it has by now pullulated far beyond its initial meaning, becoming a portmanteau affirmation of self-identities of all stripes.

It is interesting, then, that – whether by coincidence or calculation – Opera Saratoga’s opening weekend gave us two highly contrasting heroines of decidedly unorthodox self-images and determinations, one of whom wins through to musico-comic triumph, the other to a darker and more disturbing consummation.

True to the Corps

La fille du régiment (The Daughter of the Regiment) is composer Gaetano Donizetti’s splashy 1840 bel canto showpiece about a spirited girl raised by soldiers. Marie is indeed the daughter of France’s Twenty-First Regiment, the latter having discovered her abandoned as an infant in the Tyrolean wilderness and subsequently adopting her, thus becoming her collective “father.” 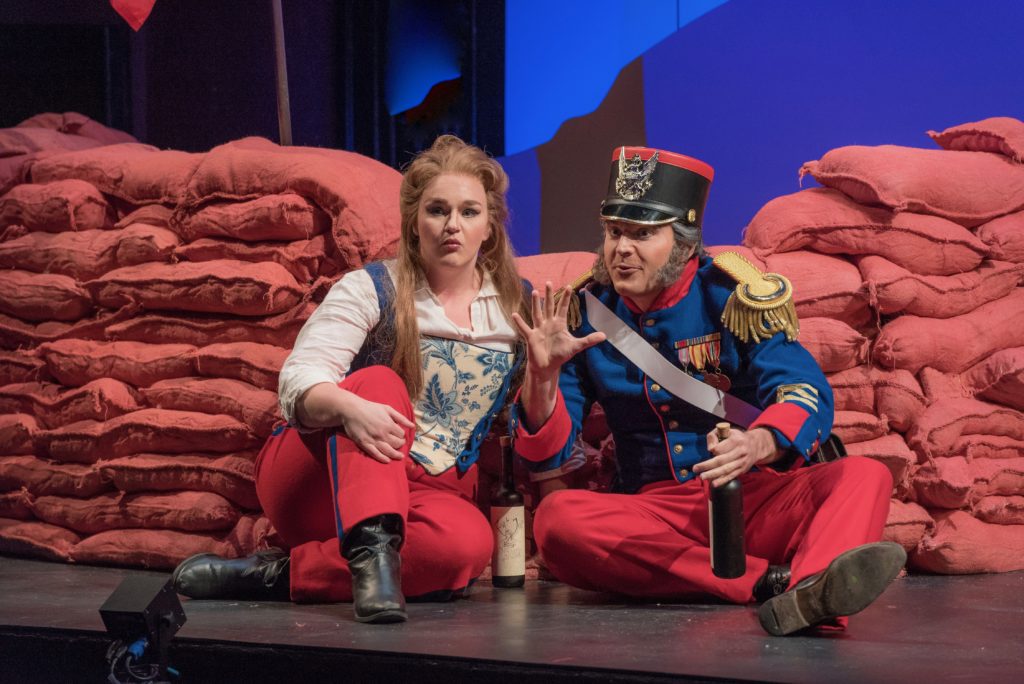 There’s a bit of a wrinkle, however. Marie’s principal paternal figure among the troop, the gruffly affable Sergeant Sulpice, has made it clear that, upon marriageable age, Marie must choose a husband from among her other regimental “fathers.” Modern sensibilities may well chafe a bit at the unsavory-seeming implications of this plot point, but the opera glides over it all with breezy naïveté. Marie is happily resigned to making her in-house choice – until she falls (quite literally, as she explains) for the hapless but charming Tyrolean peasant and mountaineer, Tonio.

In order to qualify for Marie’s hand, Tonio enlists in the regiment himself, only to find that Marie’s true birth identify –  aristocratic heiress! – has suddenly and inopportunely been disclosed by the domineering Marquise of Berkenfield, who happens to be Marie’s aunt (or is she?). Marie is forced to give up regimental life and return with the Marquise to the manor born. Tonio and his new comrades-in-arms are determined to win her back. Complications ensue. 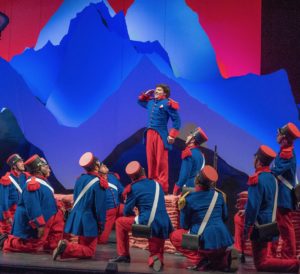 For this, his first opera composed specifically for a French libretto, Donizetti worked from a consistently witty text by accomplished Parisian boulevard dramatists Jules-Henri Vernoy de Saint-Georges and Jean-François Bayard, who managed to glance back at Napoleonic glory days without getting mired in any outright political controversies or military dustups. The opera is rife with facile surface themes of patriotism and romance, but these prove the mere shiny embossments on deeper and richer stuff – matters of gender roles, social class, and even the meaning of family – in a story of pretensions punctured and love conquering all.

Donizetti was of course eager to compliment his Gallic hosts and paymasters, but he also obviously reveled in the sheer smartness of it all, and crafted a score worthy of the libretto’s depth structure, replete not only with sparkling ornament, but a degree of structural integration – melodic echoes, inversions, thematic developments – far surpassing any typical requirements for diversions of this kind, all culminating with a wry and winning pseudo-anthemic “Salut à la France!” 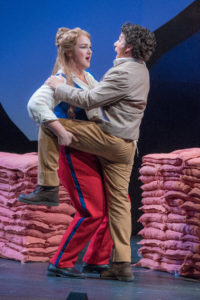 In director Lawrence Edelson’s Opera Saratoga production, Marie is played by coloratura soprano Keely Futterer with spellbinding vocal variety and fearless comic brilliance. Decked out in Act I military mufti, her abundance of loose, honey-blond hair flying, she hoofs it with abandon and arpeggiates with tomboy-diva virtuosity. Then, in Act II, negotiating Marie’s faltering attempts at transformation into elegant upper-class lady, Futterer prompts side-splitting guffaws with her clodhopping Elly May Clampett-ry, impudent tantrums, and pitch-perfect sendups of art-song affections.

Tonio is played with affable and boyish diffidence by lyric tenor Santiago Ballerini. He evinces a voice of exquisite pliancy and beguiling warmth (as in his Act II plaint to the Marquise, “Pour me rapprocher de Marie”), and acquits himself admirably in the famously thrilling, high-C-riddled “Ah! mes amis” of Act I. 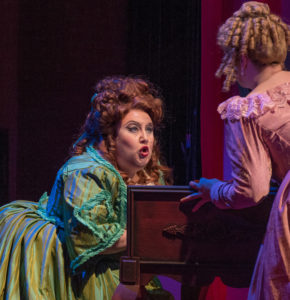 Mezzo-soprano Whitney Robinson brings robust voice and giddily eccentric hauteur to her performance of the Marquise of Berkenfield, while baritone Nicholas Martorano is inventively subversive as her butler, Hortensius. Finally, the non-singing role of the imperious Duchess of Krakenthorp is made visually indelible by the grotesque and shamelessly hilarious mock dysplasia created by actress-dancer Anny DeGange.

The costume designs by Kathleen Trott and lighting by Josh Epstein are lovely, while scenic designer Cameron Anderson has gone all out with a gravity-defying, pastel-shaded environment of alpine merengue.

Edelson’s direction is, as always, sprightly, fleet, detailed, and spot on. His choreography, ranging from the quasi-ragtime to the toy-solider-inspired to the old-timey music hall, is ingenious. Edelson maintains just the right operetta energy and velocity in the spoken French inter-musical dialogue segments, and he marshals an abundance of visual gags, including tastefully tittering romantic embraces that highlight the proportionate contrasts between the statuesque Futterer and the compact Ballerini. 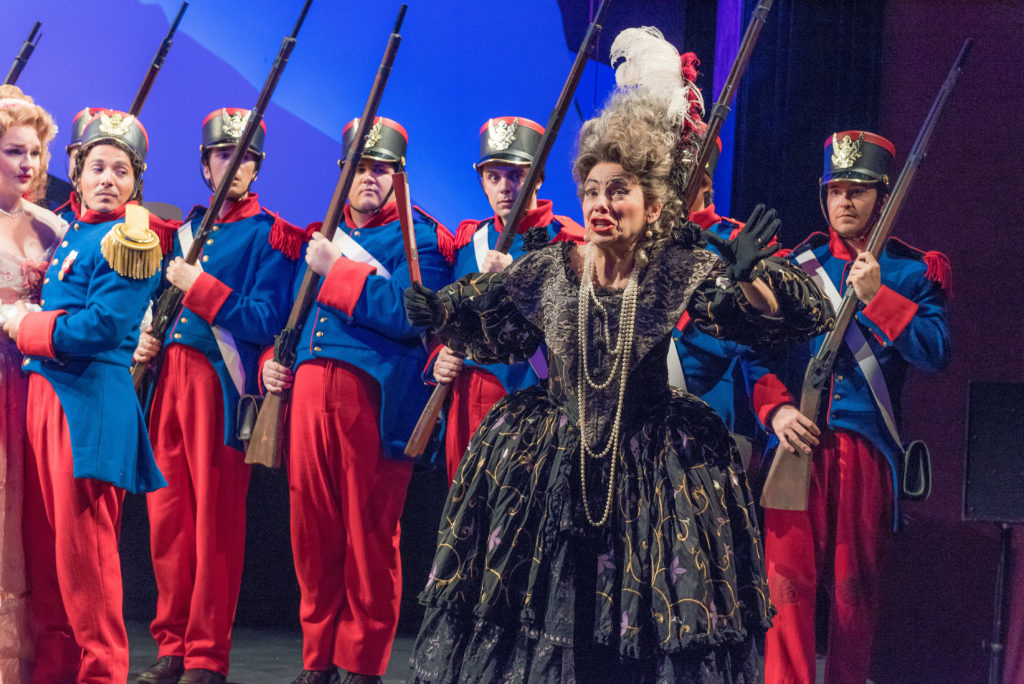 It might also be noted that this Daughter bears proud testament to Opera Saratoga’s commitment to training, boasting as it does a bumper crop of excellent performances by both current and former members of the company’s Young Artists Program.

Out of Body, Out of Mind

In its world premiere production at Opera Saratoga, Ellen West proves a troubled and troubling work about a fascinating but ultimately mystifying young woman. Indeed, on one level, the “story” of Ellen West is of a failed psychotherapeutic analysis. And while the production works hard to provide compensating satisfactions for this failure, it cannot utterly disguise the frustrations wrought of analytic opacity. 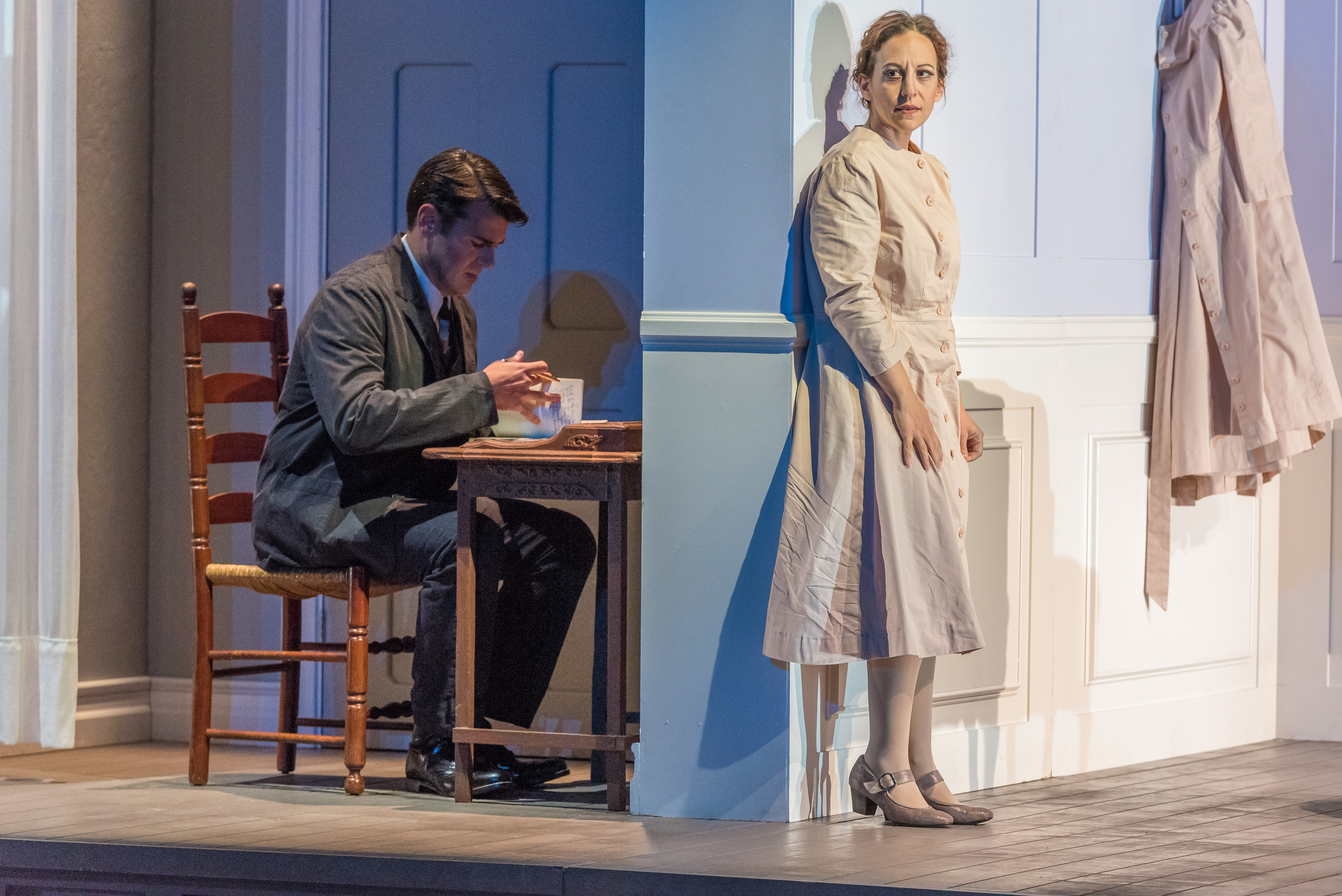 The text of Ellen West is from a work by Pulitzer Prize-winning American poet Frank Bidart, which in turn is based on a real-life early twentieth-century case study by pioneering existential psychotherapist Ludwig Binswanger. Binswanger’s patient (whom he pseudonymously referred to as Ellen West) was an intellectually precocious yet profoundly disturbed young woman who wrote poetry, battled against a deranged body image, suffered an increasingly dysfunctional relationship with food, and ultimately took her own life. From the bare bones of that case study, Bidart created a hybrid piece of literature that mixes block prose and free verse, spoken in an array of imagined voices ranging from that of Ellen herself to that of Binswanger to that of the “poet” who indulges his own free associations about food, body, art, life, and death.

A critic might well entertain defensible scruples as to whether Ellen West is an opera at all, strictly speaking – though it’s certainly tricked out handsomely as one in this Opera Saratoga coproduction with Beth Morrison Projects. There are words, but there is no dialogue. Emotional advents and clinical episodes are narrated rather than dramatized. There is much thought and theory, emotional suspense and existential angst, but there is no action. The staging creates an initially deceptive pantomime of interpersonal relationships, but an audience nonetheless arrives at a late-dawning awareness that the experience of Ellen West is one of abstract pattern, not concrete external event. 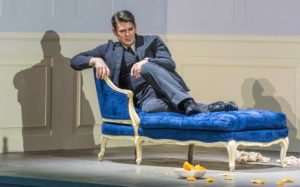 In setting Ellen West musically, composer Ricky Ian Gordon exhibits his typical fluency and good taste, creating a score of pretty postmodernism, mixing tonality with pungently transgressive dissonances and nicely apprehensible motivic developments. His work is ably abetted by stage director Emma Griffin, who has striven mightily to shape the behavioral and scenic life of the work intelligibly, crafting a more or less naturalistic vocabulary for the two vocal performers, while offering contrastingly quirky choreographic life for the two non-speaking “orderlies” who haunt the stage.

The problem here is that the contributions each of Bidart, Gordon, and Griffin, while all highly professional (and all inspired by the same underlying material), are actually disjunct, existing more in a state of artistic simultaneity than of integration. Bidart’s billowing cloud of literary unknowing, Gordon’s instinctively economical structuralism, and Griffin’s carapace of simulated dramatic trajectory are standalone achievements, at best working in tension with, at worst in outright contradiction of, each other.

Still, the performers are admirable, and deserve kudos for negotiating with such aplomb the ambiguities of the tasks assigned them. Baritone Keith Phares is billed as playing both “The Poet” and “Dr. Ludwig Binswanger.” But he is also at other times a pantomimic stand-in for Ellen’s husband, and also functions as a kind of professorial narrator in a long, sung, academic prologue Bidart added at Gordon’s request, in which Phares manages to render with warmth and accessibility a 101-level lecture on the Cartesian mind-body problem. Phares is suave, resonant, and grounded throughout. 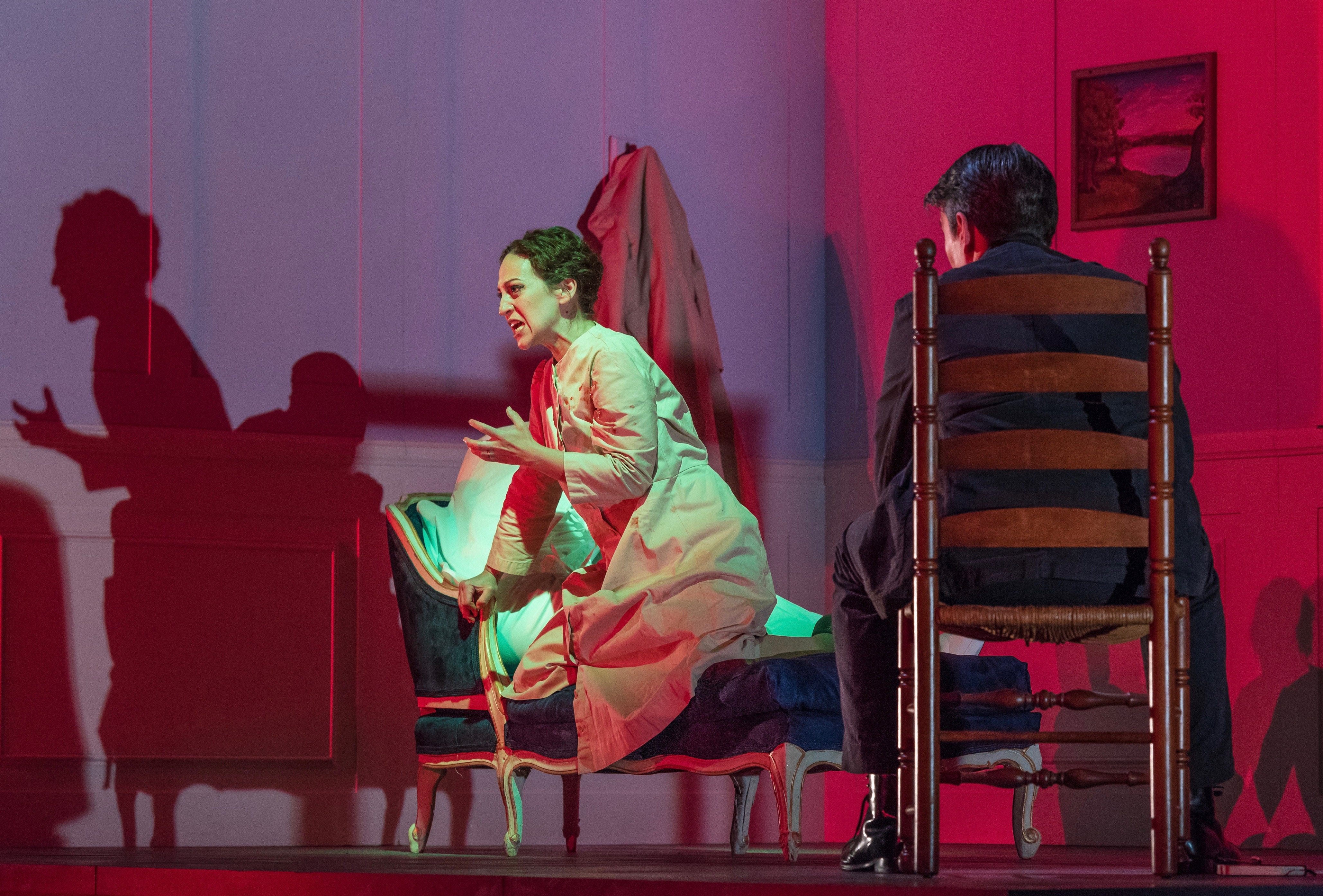 Potent and resourceful soprano Jennifer Zetlan is listed as playing Ellen West, though it’s clear that she, too, is at times called upon to channel other personae, as in a strangely protracted central aria about Maria Callas, whose much noted late-career vocal problems are here construed weirdly as having to do with her voice being eaten away by her soul, as by some existential “tapeworm.” The real Ellen having died in 1921, this anachronistic Callas discourse rather obviously reflects some preoccupation of Bidart’s own. No matter. Zetlan makes a true vocal and acting tour de force of her role throughout.

Since the capstone of Ellen’s story proper (suicide) is so downbeat, Bidart-Gordon-Griffin have added a lyrical coda derived from an entirely different Bidart poem, “Hymn.” The intention seems to have been to provide, in quasi-Whitmanesque diction, some hazy sense of transcendence, with a repeated apostrophe to the “fecund” earth. Now, “fecund” is not the prettiest word when sung (though Bidart appears abidingly fond of it, given its appearance in a range of his poetry, including “Elegy for Earth” and “The Ghost”), and the transition from Ellen’s death to ecstatic animism comes off as somewhat creaky. But, then, the 80 minutes had to end some way or other. 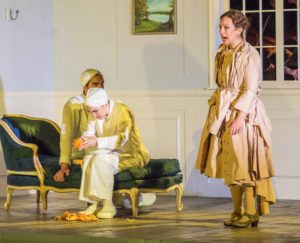 Ellen West is slated to be mounted again at the upcoming January 2020 Prototype Festival in New York City.

Ellen West was viewed at its world premiere at Opera Saratoga on June 30, 2019. Subsequent performances are/were a July 6 matinee and a July 12 evening performance.

Opera Saratoga’s third mainstage production of 2019 is the East Coast premiere of what sounds like a notably inventive shadow-puppet presentation of German composer Engelbert Humperdinck’s 1893 Hänsel und Gretel (July 5, 8, 10 and 14) created by the Manual Cinema company of Chicago; and a July 11 one-night-only Mozart and Salieri concert exploration, featuring excerpts from operas by each composer, plus a performance of Rimsky-Korsakov’s 1897 one-act opera setting of Pushkin’s scandalous (and entirely speculative) 1830 dramatic poem about the murderous rivalry between M and S, which set in motion what is now nearly two centuries’-worth of delicious rumor.

For more information and tickets, go to http://www.operasaratoga.org/.