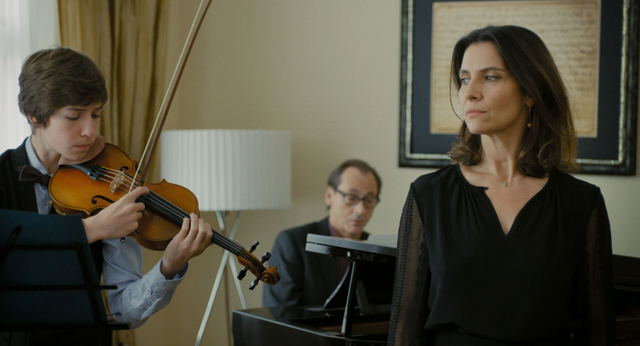 Although it has been in theatres since March 25, we had to mention the film Mobile étoile, which is set in the world of vocal and sacred music. This Franco-Quebec co-production stars Géraldine Pailhas and Luc Picard alongside Alexandre Sheasby, Dorothée Berryman, Natalie Choquette, Felicia Shulman, Éléonore Lagacé, Raymond Cloutier, Marcel Sabourin and Jason Roy-Léveillée. It’s the story of Hannah, a French-born Montrealer and classical singer, who runs a choir with her pianist husband, Daniel. They find it hard to keep the group afloat, but a highly talented singer called Abigail gives them renewed hope.

Cesc Gay’s Truman is a Spain-Argentina co-production starring two talented actors: Argentinian Ricardo Darin and Spaniard Javier Camara, one of Pedro Almodovar’s favourite actors, whose credits include Talk to Her and Bad Education. In Spain this comedy drama won five Goya awards, including best film. It tells the story of two childhood friends who meet up after not having seen each other for years. They spend a few days together reminiscing with laughter and tears. Release: April 1.

This war drama by Danish director Tobias Lindholm was nominated for best foreign film at the Oscars this year. While a group of Danish soldiers is deployed in Afghanistan to fight the Taliban, their commanding officer faces accusations of war crimes. Release: April 8.

In this moving drama, shot entirely in Atikamekw (with French subtitles), Quebec filmmaker Chloé Leriche explores aspects of life in Aboriginal communities, and looks at resilience and redemption. Shawnouk, a young, unemployed Atikamekw, is involved in a robbery that goes wrong. He tries to find salvation by practising traditional rites. Release: April 15.

Érik Cimon’s documentary, which premiered at the Rendez-vous du cinéma québécois in February this year, looks at the emergence of the New Wave in Quebec from the late 1970s to the mid-1980s. Érik Cimon made a name for himself with the series Les Citadins du Rebut Global in 2006, which won him the Gémeaux award for best direction of a documentary series. Release: April 29.

Best-known for his extraordinary film Russian Ark, Russian filmmaker Alexandre Sokourov is back with a historical drama. While France is under Nazi occupation, two men fated to be enemies combine their energies to try to save the art in the Louvre. Release: April 29.

Opera enthusiasts will be interested in this comedy drama by British director Stephen Frears (Dangerous Liaisons) about the famous U.S. soprano known and ridiculed for her atrocious singing. With Meryl Streep and Hugh Grant. Release: May 6.

In his film essay Nous autres, les autres, Jean-Claude Coulbois asks the question: can we learn about a society through its theatre? The film is an immersion in the world of four writer/actor/directors and one actor, all Montrealers, whose works explore the notion of a quest for identity. Nous autres, les autres tied with Un homme de danse for the best Canadian film award at the International Festival of Films on Art. Release: May 13.

The documentary Demain was a huge success in France, where it was seen by 800,000 people. It was made possible thanks to a crowdfunding campaign that attracted 10,266 donors who raised 450,000 euros in two days. Following publication of a study that predicted the possible annihilation of part of the human race by 2100, Cyril Dion and Mélanie Laurent set off with a four-person team and traveled to ten countries to try to understand what could cause the catastrophe and find out how to avoid it. They met pioneers who are reinventing agriculture, energy, the economy, democracy and education. Release: May 27.