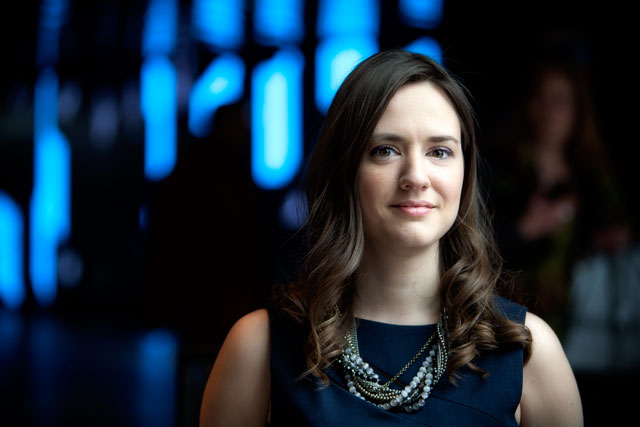 Time passes quickly. After three busy years as assistant conductor of the Montreal Symphony Orchestra, Dina Gilbert closes her final mandate next August and is already looking to the future, ready for new challenges. Here she appraises those years, which have taught her so much.

A native of Saint-George-de-Beauce, Dina Gilbert is 31 years old. She holds a doctorate in conducting from Université de Montréal, where she studied under Paolo Bellomia and Jean-François Rivest. In 2013, when she was appointed assistant conductor – the first woman ever to get the job – Jean-François Rivest had this to say:

“She’s dynamic, conscientious, industrious, methodical and organized. She’s extremely hard working and determined. She has a good mix of strength of character and moderation, which makes her well balanced. Despite all this, she’s not big-headed.”

Gilbert certainly has a gift for humility, as well as a lively mind and infectious good humour. When asked to talk about her three years with the MSO, she’s voluble – about other people, the big names she worked with who taught her so much: Kent Nagano foremost, but also guest conductors and soloists who made an impression on her, such as Sir Roger Norrington, Zubin Mehta, James Conlon, and pianist Yefim Bronfman.

In those three years she studied nearly a hundred works per year and conducted over forty concerts. She also accompanied the orchestra on tour. She had to be ready at a moment’s notice in case a conductor fell sick or missed a flight. The greatest challenges as music director were Carmina Burana with 1500 choristers at the Olympic Park, and being second conductor of the monumental Symphony No. 4 by Charles Ives in November 2015, a first in Montreal.

“I admit that was the only time the musicians saw me stressed before a concert. It’s funny, because Yefim Bronfman was the soloist at that concert and we were talking just before. Despite being so experienced, he was terrified by the idea of playing the Tchaikovsky Concerto and was pacing up and down behind the stage. I told myself, well if he has his doubts, despite his fame, maybe I’m entitled to be a little bit anxious too.”

During her stint Gilbert also oversaw many rehearsals to prepare the orchestra when Kent Nagano was away. “Among the first tasks he gave me were two rehearsals of Mahler’s Seventh Symphony,” she says. “I could see he trusted me. He introduced things to me simply as you would to a colleague. He gave me directions but he didn’t treat me like a child or make me feel I was a beginner. I always felt he was very open, which was reassuring and helped bolster my self-confidence. Also, attending rehearsals allowed me to gain a greater understanding of his palette, and find out what was most useful to him. At the beginning, he often had me conduct dress rehearsals. He’d go and sit in the auditorium and make little adjustments.”

Apart from these purely musical aspects, she sees in the maestro a model of leadership. “What impressed me most was his overall vision of his role. He’s a very good example of what a musical director should be nowadays. He’s very committed to his community and has the ability to spur people to go out and get financing. He’s a good listener, and that helps him adapt his words to the people he’s talking to. He always has big projects in mind, like the Olympic Park concerts and the Classical Spree. He’s indefatigable. You get the impression that every second of his life is devoted to music. I find that very inspiring.”

Gilbert was also very impressed by Sir Roger Norrington. “It’s amazing how much he’s kept a youthful outlook. It’s as if everything were a game, and that’s reflected in his conducting. His Overture to the Magic Flute will always be my model. He conveys what he wants to the players with minimum fuss. He’s also very generous with his time and doesn’t distance himself from the musicians. After one dress rehearsal open to young conductors he stayed behind for an hour talking to them.”

Her time at the MSO also provided Gilbert the opportunity to meet Zubin Mehta. After his Montreal visit he invited her to attend his rehearsals and concerts in Berlin and Israel. She took him up on it twice. “What I remember most is his ability to communicate, sometimes just with a look,” she says. “He has a unique magnetism.”

In 2010, Dina Gilbert founded her own chamber ensemble, Arkea. It is a professional ensemble with regular, modest seasons of two to five concerts, as well as a variety of one-off assignments. Arkea leads a nomadic existence, as it doesn’t have premises of its own, and it plays pretty much anywhere.

“It’s a versatile group, open to all sorts of possibilities,” explains Gilbert. “We go where the jobs take us. There’s a lot of administrative work, because I’m in charge of every aspect, not just the music. I think it brought out the Beauce side of my character, because we’re known for our entrepreneurial skills. As time passed, I realized that the greatest challenge is longevity. It’s easy to launch a new ensemble, but it’s hard keeping it going. One of the difficulties was that I insisted on the players having a salary. So we have to get financing.”

Being a musician often means being freelance, and Gilbert thinks most leave music school unwilling to face this reality. “When I’d finished my doctorate it was important for me to have my own ensemble, but now I realize just how little I knew when I launched Arkea six years ago. More recently, I took a course in business and career development with HEC professors with the help of the Fondation Fernand-Lindsay. I realized how much that would have helped me before. Universities and conservatories haven’t understood that musicians are freelancers, and that there’s a gap in the training they offer. We have to stop thinking people are going to call us just because we’re talented. We have to create our own opportunities.”

For four years, Arkea has also held a composition competition called Accès Arkea. It received 24 applications for its fourth edition, from Quebec, the rest of Canada, the United States and even Turkey. The winner, with a piece entitled Mirror, is the young Brazil-born composer Gabriel Penido, a doctoral candidate at Université de Montréal under François-Hugues Leclair.

“For the first three years, we held the competition with the organization Code d’accès, and even though the partnership was dissolved, we decided to go on with the competition. I think it’s important to help the composers of our generation. It’s hard being a musician today, and it’s even harder being a composer. Because we don’t have the funds to offer a grant, the prize is a mentorship. We help composers with different aspects of their career and work. It’s a year when they can count on us, and I also commission a work for the following year.”

On April 26, Gilbert conducts the MSO in a concert devoted to music for cinema. The actor Rémy Girard, who has a passion for the genre, will host the event. The evening will include works by Nino Rota, Ennio Morricone, Bernard Herrmann, John Williams, Vladimir Cosma, Michel Legrand, Michel Cusson and François Dompierre.

“Conductors don’t always appreciate film music, but I think we’ve chosen works with real musical merit. I have a lot of respect for this type of music, and I love the fact that it’s so vivid. When you hear it, you replay scenes from the film, you relive memories. The value of this program is that it appeals to all the generations by conjuring up movies from different eras.”

So what’s in store for Gilbert after her three years at the MSO? At the time of this interview, in March, a number of projects were in the air but none was confirmed. Gilbert will soon go for an audition at the Sudbury Symphony Orchestra, a position for which she is a finalist. She is also a finalist for the job of director of the Orchestre symphonique du Saguenay-Lac-Saint-Jean. In May she will be guest conductor for a youth concert at the Toronto Symphony Orchestra.

“I have to make my own way now. I’ve had a lot of support from the MSO during this transition. They’re very glad to see the opportunities I’m getting with other orchestras. I feel optimistic about my future. The immersive experience with the MSO proved beyond doubt that I adore this job. It’s a demanding job, and tiring, but you forget the fatigue when you think of all the wonderful times. I realize I’ve grown a lot just from working alongside these musicians.”

Dina Gilbert conducts the OSM in a program of cinematic music, April 26, 7 PM, at the Maison Symphonique. www.osm.ca