Boris Brott and the Orchestre classique de Montréal are not big in Japan. At least not yet.

They are, however, doing rather well in Mexico.

“And comments on Facebook too,” OCM executive director Taras Kulish says about the flurry of interest south of the border in a performance of Handel’s Messiah, which starts streaming on Dec. 8. “I never expected this reaction.”

Few could have expected the OCM to attract Mexicans with a concert emanating from St. Joseph’s Oratory in Montreal. But such are the paradoxes – and opportunities – of concert culture in the age of COVID.

We are told repeatedly by presenters that online concerts can be enjoyed in the comfort of our homes. No law says that home has to be near the performance itself. This simple truth dawned on Kulish as he considered where to concentrate his Facebook advertising dollars.

“We used to advertise only in Montreal because we had in-person concerts,” Kulish said. “Since we are doing webcasts, it just occurred to me, why wouldn’t people be buying tickets across Canada or across the United States? We gave it a try and it’s having tremendous success.”

The strategy is called geotargeting and it is widely used to sell products on the Internet. Not many culture marketers have considered its potential in classical music, which, before last March, was overwhelmingly an onsite rather than online enterprise.

So far, the audience for the OCM Messiah includes viewers from all Canadian provinces except P.E.I. Nine American states are on board. 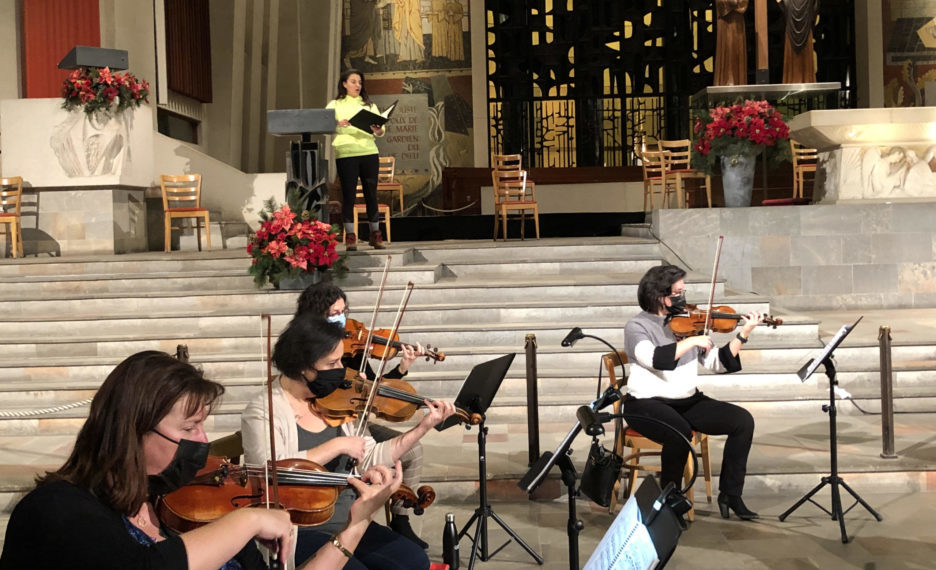 Rihab Chaieb rehearsing with the OCM

One clear explanation of the off-island interest is the dearth of live Messiahs in a continent that is substantially locked down. For many music fans, Christmas is not Christmas without a performance of this oratorio.

Kulish has a few specific thoughts about the Mexican response. “There are over 20 million people in and around Mexico City,” he said. “Mexicans are very Catholic and very religious.”

The success must be kept in perspective. The OCM has sold about 50 tickets in Mexico. Total sales on the eve of the webcast are around 800 – the same number that attended the OCM Messiah last year in person.

Kullish estimates the off-island segment of that total at 200. The orchestra has given itself an attendance boost by dedicating the performance to healthcare workers and making it free to frontline MUHC employees.

Of course, the digital box office does not close on Dec. 8. The OCM Messiah will be available for streaming through Dec. 22.

“I have a feeling the closer we get to Christmas, the more it will pick up, because everybody gets into the festive mood,” Kulish says. “There is nothing anybody can do right now. This plays to our advantage.”

A few elements of the online formula do not. At a modest $15 per ticket, even sales surpassing 1,000 would not generate the revenue of a live-audience performance.

“Maybe we didn’t help ourselves by going with $15 because Messiah is quite a big project,” Kulish said. “But that’s OK. At least we’re attracting a lot of people and building an audience.”

Whether that audience, post-pandemic, will be online, in situ or a combination of both is one of the great questions of the era.

Kulish is thinking positive. “I feel that this crisis has helped our classical music industry to join the 21st century on the digital side of things and to become more global with our reach,” he says. “It’s very exciting.

Handel’s Messiah, as performed by the Orchestre classique de Montréal under Boris Brott, starts Dec. 8 at 7:30. Xavier Brossard-Ménard will conduct Part 1. The webcast is available through Dec. 22. Go to www.orchestre.ca.