This ensemble, now called the Orchestre classique de Montréal, has decided to organize its 2021-22 season around the theme of Women of Distinction as a recognition of the looming centenary – on Feb. 8 – of its iron-willed matriarch.

While Mrs. Brott was best known to insiders as the administrative power behind the podium occupied by her husband Alexander Brott (1915-2005), she was also a regular cellist with the OCM (as well as the OSM, from 1941 until 1987). The triple duty apparently left time to raise a pair of accomplished musical sons, Boris and Denis, both familiar to Montrealers, the former as successor to his father as OCM artistic director. 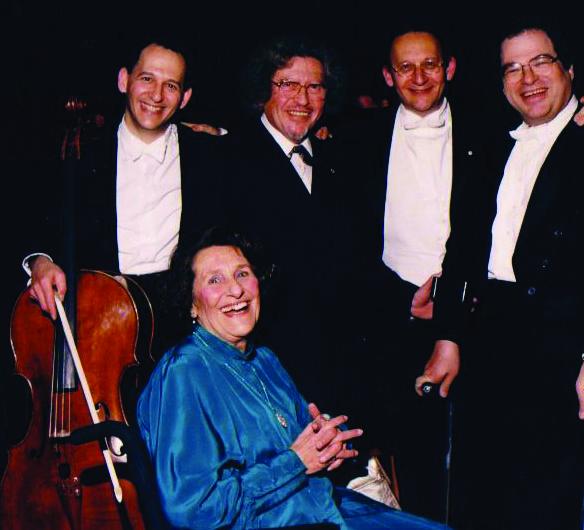 It might be appropriate now to mention that Mrs. Brott performed her Herculean labours in spite of health difficulties, that would topple an ox. Not that this obstacle was apparent to concertgoers, many of whom must have assumed, perhaps not inaccurately, that she was seated on stage with her cello before the hall was open out of a eagerness to warm up.

Daylight hours were dedicated to the orchestra and maintaining its roster of international guest soloists. Or maintaining subscriber relations. The number in the season brochure was Mrs. Brott’s home phone on Earnscliffe Ave. in N.D.G.

I got my share of calls. Sometimes the ostensible objective was to seek advice – as if the thoughts of a thirtysomething critic could possibly be of any use to one of the canniest music managers in North America. Often the real objective was to issue elegant chastisement for a critical comment in a day-after review. I recall catching heck for missing a Messiah. I recall also that Mrs. Brott listened with interest to my suggestion that the orchestra consider presenting another Handel oratorio with seasonal associations: Judas Maccabaeus. (Still a good idea.)

Her success was partly the product of personal charm. Born in Mannheim and educated in Switzerland, the multilingual Mrs. Brott (née Goetzel) brought European elegance to the search for sponsors, an area in which she can be considered a Canadian pioneer.

“Lotte’s technique was to phrase everything in the positive,” Alexander wrote in his memoirs. “Our concerts were a ‘prestigious privilege’ with which sponsors would naturally want to be associated. She was never the supplicant.”

It is intriguing to wonder how Mrs. Brott might have adapted to the technological advances of the new century.

Text messages the morning after? Nothing was beyond Lotte Brott.