You are at:Home»Classical Music»Choral singing: a long road back
Advertisement / Publicité

It was a shocker in an age of shocking stories. Fifty-five members of the Skagit Valley Chorale in Mount Vernon, Washington, met at the local Presbyterian church on March 10 for a rehearsal. Three weeks later, 45 had tested positive for COVID-19. Two were dead.

Despite the availability at the door of hand sanitizer and a general moratorium on handshaking and other forms of physical contact. Despite the testimony of several members that no one was heard to cough during the two-and-a-half-hour rehearsal.

Nor is the Skagit Vallet story the only documented case of choral super-spreading. The Amsterdams Gemengd Koor (Amsterdam Mixed Choir) held a non-distanced rehearsal on Feb. 25, two days before the first COVID-19 case was officially identified in the Netherlands. According to the Dutch daily Trouw, of the 130 choir members, 102 fell ill as a consequence of the rehearsals or the performance on March 8, in the Concertgebouw, of Bach’s St. John Passion. One member, aged 78, died. Three other deaths are implicated.

Has choral singing, along with other elements of civil society, changed forever? Will it return in its familiar form as new cases decline? They are pertinent questions for Montreal, where three June performances by Kent Nagano and the Montreal Symphony Orchestra of Mahler’s Second Symphony (“Resurrection”) were postponed in the wake of a provincial ban on public gatherings and performances of Beethoven’s Ninth Symphony by the MSO (outdoors, at the Parc Olympique) and the Orchestre classique de Montréal (indoors, at the Maison symphonique) were cancelled outright.

On the surface, choir practice and performance look like perfect crucibles for the dissemination of airborne pathogens. Dozens of vocalists must gather in close proximity. Each expels more than sound, often with considerable force. The chorister in front can hardly fail to breathe in a bit of what the chorister behind breathes out.

Lothar Wieler, the president of the Robert Koch Institute, the German government’s disease control agency, issued a specific warning last month against singing during the outbreak: “Evidence shows that during singing, the virus drops appear to fly particularly far.”

Wieler is a veterinarian, not a profession that requires expertise in vocal arts. Similar opinions, however, emerged recently from an online panel discussion organized by the National Association of Teachers of Singing (NATS), the American Choral Directors Association (ACDA), Chorus America, the Barbershop Harmony Society, and the Performing Arts Medical Association (PAMA).

Dr. Lucinda Halstead, an otolaryngologist and choral enthusiast who specializes in voice and swallowing disorders, concluded that no effort of distancing can realistically create a perfectly safe environment for a choir.

“How would you space them out with six feet between them?” Halstead asked, referring to the Westminster Symphonic Choir, a large and acclaimed collegiate ensemble based in New Jersey. “You would need a football field.”

On-site screening will be helpful once reliable tests are available, she said, but so-called Rapid Diagnostic Tests at present yield too many false negatives. As for masks, these are impractical and even dangerous for choristers because of the retention of carbon dioxide that results from the recirculation of breath.

“By the end of the day, I have really nice headache,” Halstead said of her own clinical work with a properly fitted N95 mask.

As well as expelling particles better than most people, vocalists absorb them efficiently because they breathe deeply while singing.

“The better trained singer you are, the more you’re going to use all your lung capacity, by using that last bit of air,” said Dr. Donald Milton, a professor of environmental health at the University of Maryland who also spoke in the panel discussion.

Milton said that better ventilation – which might have been limited at the church where the Skagit Valley Chorale rehearsed – can lower the “attack rate” of viruses indoors, though some risk will always remain.

Iwan Edwards, former chorus master of the Montreal Symphony Orchestra and founding artistic director of the St. Lawrence Choir, suspects that the intermission coffee break, typically marked by much circulation and face-to-face conversation, is overlooked as a forum for infection.

“In the course of the rehearsal itself, people keep their faces forward,” he said from his home in Lachine. “They don’t interact in the same way.”

Another consideration is the prevalence in the choral world of carpooling. Four Skagit Valley Chorale members who tested positive shared a lift to and from the rehearsal, according to the Los Angeles Times.

Whatever the dynamics of transportation and rehearsal, choir practice often involves a substantial contingent of participants over 60. Choral singing appeals to all ages, including children, but especially older adults and retirees.

Statistics indicate that mortality from of COVID-19 increases dramatically with age. This invites the question of whether choral singing will become less popular among the middle-aged and older adults who form the backbone of many amateur choirs.

“There is a definite difference between a college choir and…a church choir or symphony choir, where there is a mix but with a preponderance of members who are older,” Halstead said.

Some ensembles have tried to overcome the risk of live interaction by cobbling together performances on the Internet, typically by recording parts independently with click tracks and relying on the conductor for moral support. The Metropolitan Opera Chorus sounded well-coordinated in Verdi’s “Va, pensiero” at the Met At-Home Gala on April 25. 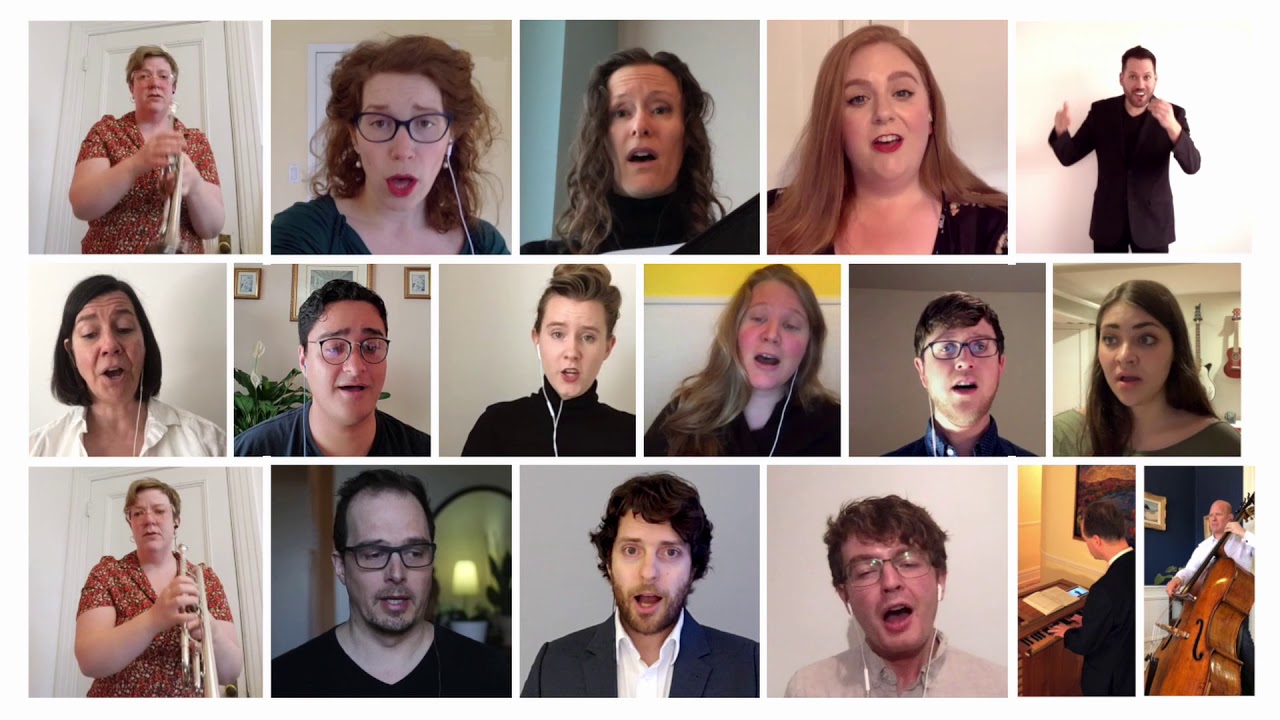 Jean-Sébastien Vallée, director of choral studies at McGill’s Schulich School of Music and the director of the choir of the Church of St. Andrew and St. Paul, organized a stirring YouTube rendition of the “Hallelujah” Chorus with the latter ensemble last month and plans another online performance, of a Bach motet.

All the same, he does not regard such projects has a template for the future, both because of the time required to assemble the audio and video feeds and because of the “rigidity” of the musical results.

“It takes about three weeks for everybody to be recorded and about 50 hours to assemble this into one five- or six-minute piece,” he said. “This is far from what choral music is in terms of live performance. None of the experience of live music or ensemble is present in this kind of format.”

Even where online performance proves feasible, it makes extraordinary demands on individuals who are not accustomed to solo singing. Choristers come in varying strengths. Some learn by ear from the better singers surrounding them. Chorus masters arrange choirs strategically with this in mind.

Another inevitable loss is the camaraderie that constitutes part of the appeal of belonging to a choir.

“They need that social interaction as much as they need the singing itself,” Edwards said. “That’s probably the greatest part of this devastation. People are cut off from each other.”

Despite these obstacles, the choir in some form will probably survive. A regimen of precaution was already in place before the emergence of COVID-19. A cold or flu was widely understood among choristers to be a non-negotiable reason not to attend a rehearsal.

Vallée foresees an eventual restart with small professional choirs whose members are “willing to embrace a certain level of risk” because of their health, age and confidence in the health of their colleagues.

Even the Skagit Valley Chorale, for all its troubles, remains in operation. “We hope to be able to join together in song once again in the fall, in preparation for our December ‘Heralding Christmas’ concerts,” the website declares.

Halstead’s prescription is patience. “One day we will get back to having choruses, and orchestras and audiences…because all of our fantastic researchers have put so much effort into this. The research and technology driving this, and the achievement they have made in a short amount of time, are stunning.”