You are at:Home»Scena Arts»Literature»In Search of the “Phantom of the Opera”: Between Fiction and Reality

The story of The Phantom of the Opera as related in Gaston Leroux’s 1910 novel intertwines proven facts and popular myths with the author’s inventions. Popular notions concerning the origin and existence of the “opera ghost” take a few forms because historical facts are mixed with anecdotes. The mélange is so complete that the story of this not-so-shadowy masked man has continued to keep the mystery alive and blur the boundary between fiction and reality.

Gaston Leroux worked as a court reporter, theatre critic and general-assignment reporter for Le Matin before turning his attention to fiction. As a journalist, he covered the Opéra de Paris, a stronghold of the Paris Commune. Since Leroux covered the Palais Garnier during its construction between 1861 and 1875, he caught wind of some secrets.

Leroux heard a rumour that a certain Erik, one of the Palais architects, asked to live amid the foundations of the building and was never seen again. This is how the Phantom acquired his first name. As in the novel, the Palais Garnier was built over a lake. Digging beneath the structure, workers struck a branch of the Seine. Since the water could not be contained, a tank system was installed. This underground basin, which resembles an artificial lake, is used nowadays by firefighters who are trained to swim in darkness. 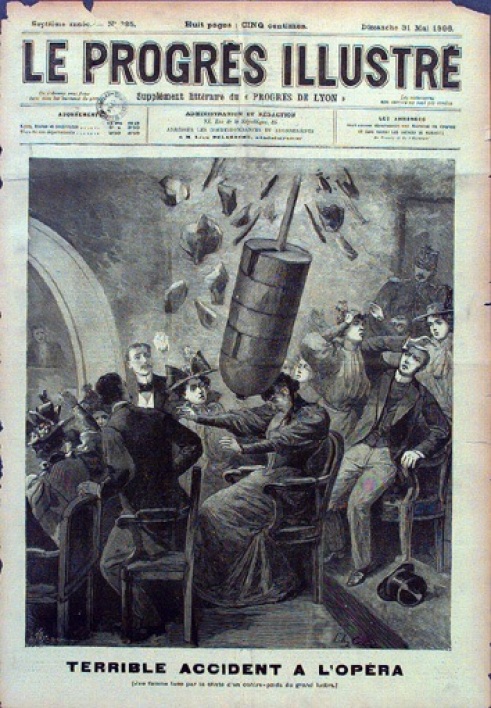 Another fact that found its way into the novel was a tragic incident in 1896: a counterweight holding up the Palais Garnier’s huge chandelier fell, killing a woman during a production. Leroux made this the climax of the story, in which Erik avenges himself by causing the chandelier to fall before abducting Christine in the ensuing tumult. The connection to reality is clear in the novel. Leroux wrote: “I no longer want to revisit a historic moment. Anyone interested in knowing what happened can read the newspapers of the time. Many were injured and one died.”

The preface, in which the detective narrator and the author merge into one voice, reveals that the Phantom’s body was found during the burial of recordings belonging to the Opéra. Though history does not confirm that a body was found, the recordings were indeed interred. In 1907, the Gramophone Company sealed 24 recordings in two crates before placing them in the opera crypt for the next 100 years. They were retrieved in 2007, digitized by EMI and sold under the title Les Urnes de l’Opéra.

Christine Daaé’s character was based on Christine Nilsson (1843–1921), a famous Swedish soprano of the day who, unlike most of her rivals, never made a recording. She came from a modest background and was appreciated for her nordic appeal. She was acclaimed for her performances of Marguerite in Gounod’s Faust, among other roles.

Many like to keep the mystery alive. Some go as far as to perpetuate the idea of a curse. The fire that broke out before the 2016 premiere of The Phantom of the Opera at Paris’s Théâtre Mogador gave impetus to this superstition. Pierre Vidal, curator of the Palais Garnier collections, is acquainted with the myth of the watery lair and the reality of the tank. Interviewed by The Daily Telegraph, he observed that even if no one actually sees him, the Phantom is jokingly accused whenever a baffling event occurs at the Opéra1.