Church bells have always had a cultural significance that extends beyond their strict use for worship. Their language, understood by parishioners the world over, underscores many aspects of the spiritual and social life of communities.

In the winter of 2020, the archbishop of the Diocese of Montreal approved the demolition of the steeple of Sacred Heart of Jesus Church in Montreal’s Centre-Sud district, due to water damage. As a result of a lack of funds to repair the tower, initially built in 1885, it was to be dismantled, taking the set of five large bells contained inside with it.

As a composer, and having been the conductor at this church for more than 20 years, I could not accept such a loss. I proposed a plan to the archdiocese, to install these impressive instruments, an aural marker of the history of the Centre-Sud, inside the building itself. To demonstrate the relevance of the project, I provided numerous documents (photos, plans, feasibility studies, etc.) to the archdiocese and the engineering firms involved. All of them supported the project, and the bells were installed in the Sacred Heart of Jesus Church in January 2021. Today, they stand on either side of the nave, on pedestals designed by sculptor André Fournelle and surrounded by an exhibition of artifacts related to their history, and that of the church. It should be noted that, according to the renowned campanologist Michel Rowan, the installation of such a bell ensemble in a nave has no precedent locally or internationally.

As soon as the bells were installed in the church, I undertook their acoustic study with Olivier Maranda and François Gauthier, passionate researchers and experienced percussionists who have worked notably with the OSM, the OM, the SMCQ, the ECM+, etc.

From a Call to Arms to Concert Instruments

From the outset, it was unthinkable to approach the study of these bells in a closed space, particularly one with such a substantial echo. It was mostly a question of their volume being much too high, and the impossibility of controlling them in a musical way in this context.

Our work became a question of discovering and taming the bells as percussion instruments. The study consisted of locating the distinct, audible notes produced by each of the bells, and locating the points at which the bells had to be struck to result in their full amplitude. The question of the weight of the strike was then considered—not only a question of the character of the attack, but also of the weight and consistency of the mallet. Given the mass of each of the bells (685 pounds for the small bell in C; 7,650 lbs. for the drone) and so as to generate the maximum resonance from each impressive bronze vessel, we designed mallets of 2½ to 5 pounds.

Making the bells ring with mallets rather than in flight allows us to control the notes they produce, by determining their consonance and their volume levels. Astonishingly, notes coming from the imposing body of the bell, attacked at piano volume, resonate for approximately 30 seconds. Such a duration makes it possible to exploit the juxtaposition of the bells’ timbre with that of other sound sources, and to harmonize them with each other, and other instruments.

Together, the five bells form what is known in bellmaking parlance as a “Westminster” pattern, i.e., C-F-G-A-C. Each bell produces a second note in the centre of its robe. Depending on the size of the bell, octaves, fourths and major thirds can resonate above or below the fundamental. In addition, when the bottom of the bell (the striking ring) is struck to obtain its fundamental, a minor third harmonic (two octaves higher) can be heard distinctly in the echo. 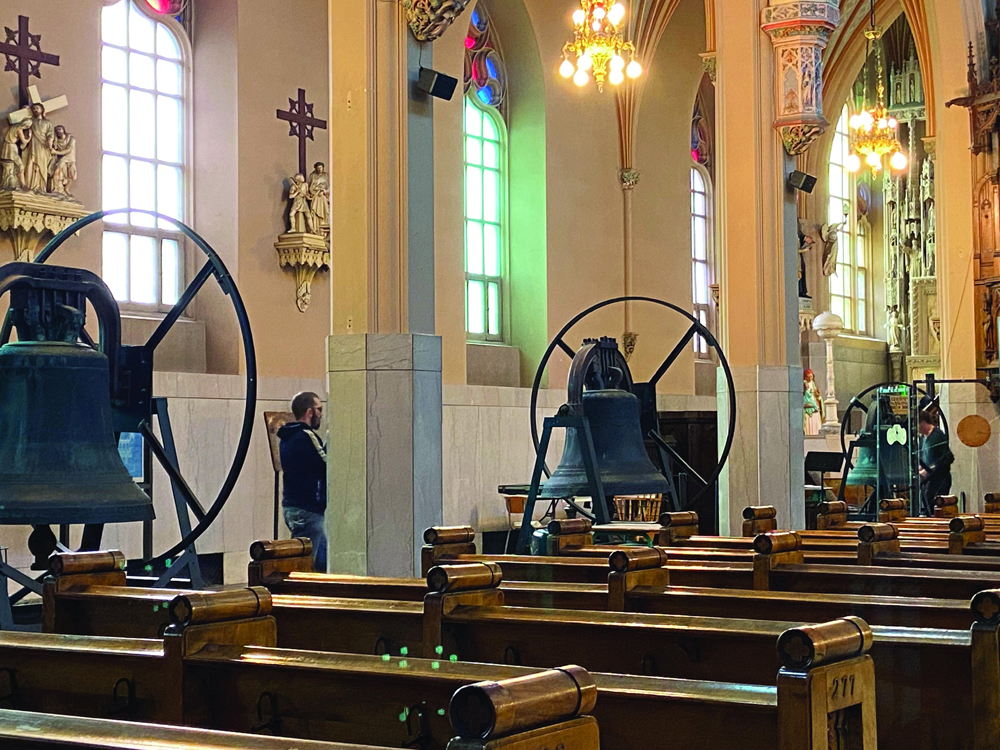 As a continuation of this process, in the winter of 2021 I undertook a series of compositional studies for five large bells, percussion, soloists (a baritone and a soprano), organ and string instruments, with my colleagues. These compositions were performed in a series of concerts in June 2021.

I will be playing the small bell in C, surrounded by string instruments. Adrian Foster will play the organ, using a minimalist sound world to magnify the bell’s harmonics, as it resonates in the nave. These sounds, blended in the deep echo of the church, will draw the listeners’ attention into the distance, heightening their awareness of this vast sonic space and a depth to the narrative generated by the bells.

Beginning in the winter of 2023, the church will invite composers to participate in residencies to develop works for five large bells. These residency projects will allow for a more in-depth exploration of these jewels of our sonic heritage and musical heritage, and the development of a repertoire dedicated to them.

Concerts featuring the bells will be presented on Nov. 18 and 19 at 7:30 p.m. and on Nov. 20 at 3 p.m. at the Sacré-Coeur-de-Jésus Church, located at the intersection of Ontario Street East and Plessis Street.

For more information, please contact the author at [email protected]