HONG KONG – As a follow-up concert to the 48th season opener, which featured Beethoven’s Seventh Symphony, Jaap Van Zweden on Sept. 10 led the Hong Kong Philharmonic in a rousing and varied evening of musical contrasts.

The program at the Hong Kong Cultural Centre began with the mournful and meditative Asian premiere of British composer Anna Clyne’s Within her Arms,  a study in loss and memory occasioned by the passing of her mother but richly evocative in the present moment as a reflection on the losses and absences of the pandemic years. The semicircular arrangement of 15 standing strings hearkened back to the gentle lilt of Elizabethan music while also echoing the resonant and dream-like sound fields of New Age. 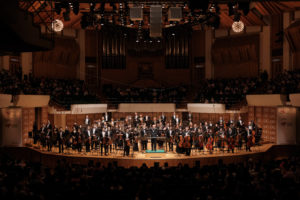 The highlight of the evening was the shimmering and dizzying playing of Avan Yu in Rachmaninoff’s Rhapsody on a Theme of Paganini. An ultimate tribute from one paragon of musical virtuosity to another, Rachmaninoff’s variations on a Paganini caprice for violin boldly incorporates the dies irae – the Catholic mass chant signalling the Last Judgement – reawakening the age-old suggestion that musical mastery have something of the diabolical in play.

The young Canadian pianist more than rose to the occasion,  executing the recurring large leaps and challenging glissandi with the right mix of fervour and control.  He rode the storm well in this test of dynamics, which often finds the soloist poised on the edge of his seat as if in a standoff against an invisible combatant.

As a sort of homecoming for the Hong Kong-born instrumentalist, one cannot wonder whether the emotions of the diaspora experience further informed his playing. As one of the few late-career compositions of a musical giant whose own experience of exile and diaspora as a result of the Russian Revolution compelled an emphasis on performance and virtuosity, Rachmaninoff via Yu speaks to a modern experience, as frequently attested to by its use in films and even video games.

On the other hand, the concert closer, Dvorak’s Seventh Symphony, the orchestral world’s equivalent of classic rock, admirably executed with the requisite Brahms-like thoroughness, is a document of another age, one of grand sweeping statements, not yet familiar with the unexpected and real-life mass encounter with fire and brimstone.