You are at:Home»Classical Music»Summer 2022 Festival Highlights – Quebec, Ontario and Canada

The New Brunswick Summer Music Festival was a small, three-day series of concerts when it was first established in 1994. In 2022, ­however, the festival’s concerts will be joined by some free events, educational components and lectures spread out across two weeks.

The early-August festival will focus on the influence of Italian and Canadian-Italian artists, and although the program and schedule have not yet been released, the retrospective will ­include such widely known artists as Vivaldi and Verdi.

A variety of works from different musical eras over the last few centuries will also be included.

The Stella Musica Festival is dedicated to ­celebrating women’s musical accomplishments, whether that means hosting female performers or playing music written by female ­composers. Their seventh season’s program is spread out across two days and three main events.

The intimate concert on June 3 will be headed by the Fortin-Poirier Duo’s exploration of the theme of the night in “Nuit Blanche,” which will be followed by singer Martina Myskohlid and pianist Rebecca Klassen-Wiebe. The round table, taking place on the same night, will be a discussion about refugees’ ­access to music. 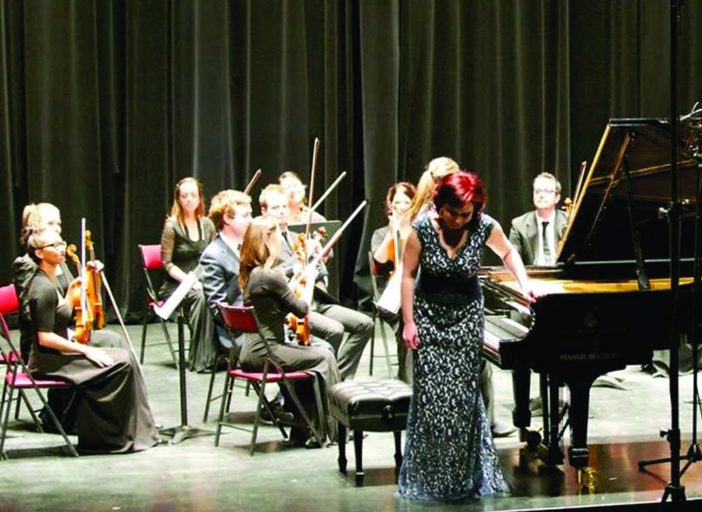 Held at Bourgie Hall, the Montreal Chamber Music Festival is a celebration of Canadian ­musicians’ exceptional talents. During the week-long event in June, violinist James Ehnes, alongside pianist Andrew Armstrong, will be conducting a three-concert program of the complete works of Brahms and Schumann. ­

Nationally lauded pianist Philip Chiu will also perform one of Schumann’s arrangements: the piano accompaniment to Paganini’s 24 Caprices for Violin, the violin part of which will be played by American musician Kevin Zhu.

The festival’s closing concert will be a world première of composer Avner Dorman’s Violin Concerto no. 2 for Sextet, as well as a sonata from both Beethoven and Mendelssohn, all performed by the Barbican String Quartet alongside various other musicians.

Every Wednesday evening from late-June to late-August, the city of Pointe-Claire will be holding outdoor classical, jazz, and world music concerts in Stewart Park (or the Stewart Hall Cultural Centre if it’s raining). The world music performances will range from El Trio Argentino and Flavia Garcia’s blend of traditional and urban tango to Rafael Wiliskin Medina’s salsa- and merengue-inspired ­compositions, to the Montreal Guitar Trio’s tribute to Italian composer Ennio Morricone.

Meanwhile, the Sinfosia de l’Ouest will play classical works by Vivaldi and Mozart, and the Orchestre symphonique de Montréal will close out the season on Thursday, Aug. 25 with a tour around the city that passes through the park. All concerts will be free, but bring your own chairs. 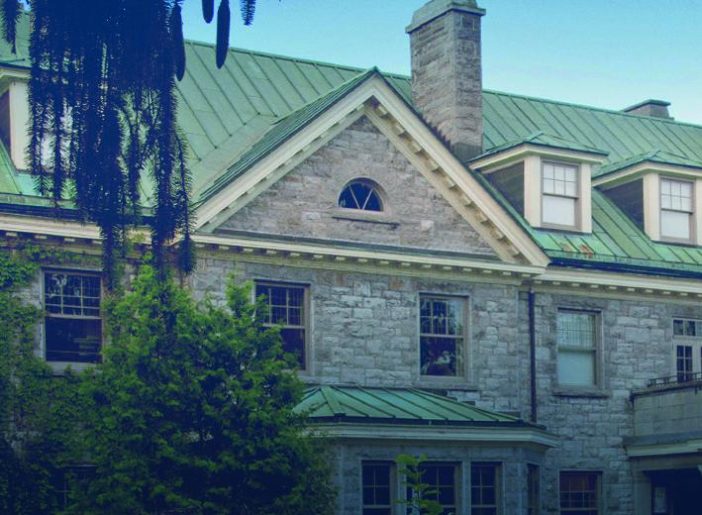 The 2022 Montreal Baroque Festival is a late-June event centred around the theme of ­“feminine cadence”— the societal limitations imposed on 17th– and 18th-century women ­didn’t stop them from composing and ­performing the beautiful works that will be showcased this summer. Over the course of four days, 12 concerts will be conducted by such ensembles as Infusion Baroque, the Tafelmusik Baroque Orchestra, and the Maddalena Laura-Ximenez String Quartet.

Many conferences and discussions centred around the musical accomplishments of women and the ideas of inclusion and diversity in early music will also be organized between concerts.

The Festival de Lanaudière has become a ­staple on the Canadian classical music scene since its establishment in 1977. Seventeen concerts—beginning on June 30 with the OSM’s presentation of Prokofiev’s Violin ­Concerto no. 1 in D Major, Op. 19 and Mahler’s Fifth Symphony with the famous Adagietto—are scheduled to be held in the 8,000-seat Fernand-Lindsay amphitheatre.

After having to cancel their in-person programming two years in a row, the CAMMAC Musical Sundays Festival is back for summer 2022. CAMMAC hosts one-hour concerts with artists of international acclaim, such as accordionist Michael Bridge and soprano Mireille Asselin, as well as ensembles like the Bennewitz String Quartet. These concerts will be followed by a brunch buffet and an opportunity to spend an afternoon by the beautiful Lake MacDonald.

The CAMMAC Music Centre also runs a Summer Music Retreat that offers eight weeks of all-ages musical education (June 26 to Aug. 21). From chamber music to Broadway and blues, every week’s classes will explore different musical themes or genres. Students will be able to volunteer to play in Saturday night concerts. 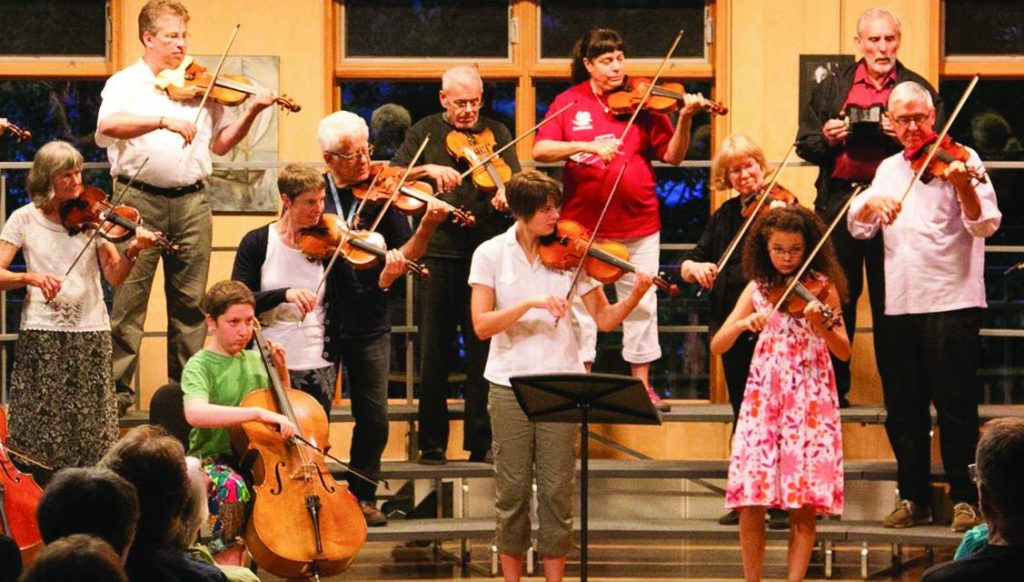 These two free festivals will be held at the foot of the beautiful Mont-Tremblant mountain range. Les Rhythmes Tremblant is a series of concerts centred around contemporary ­Canadian music. From July 8-10, artists like singer-songwriter Julyan, vocalist Dumas, and guitarist and violinist Marilyne Léonard will play pop-rock tunes from the 1960s onward.

As for Festi-Jazz Mont-Tremblant, the ­program for its 15th season has yet to be announced, but visitors can expect to see more than 50 jazz shows throughout the first week of August. Previous Festi Jazz performers ­include saxophonist Benjamin Deschamps (2019), the Lex French Quintet (2021) and the Frédéric Alarie Trio (2021).

After postponing their 2020 season and ­offering a standalone Stick&Bow concert in 2021, this Gatineau festival is back in full force this ­summer for their seventh edition. The opening concert will be a harp quartet’s rendition of ­Vivaldi’s The Four Seasons, among other works, and the following day’s concert will feature ­compositions by Joseph Bologne, performed by soprano Frédéricka Petit-Homme and Ensemble Obiora.

On July 16, Nicole Ross and the ­Festival String Orchestra will play works from Mendelssohn, Janáček and Puccini, and the ­festival will close with a performance from the string quartet Quatuor Despax. All four concerts will be offered at the Notre-Dame-de-la-Guadeloupe Church.

Formerly Montreal’s Italian Week, this annual celebration of Italian art, music and food was established in 1994 to promote multiculturalism. This summer, ItalfestMTL will be holding its 29th edition in various locations across the Montreal Island: after stops in Kirkland, Laval, LaSalle and Saint-Leonard over the first five days, the performances will settle in Little Italy from Aug. 12-14 before finishing in the Quartier des Spectacles from Aug. 19-20.

No program is available yet, but the festival will be themed after the Southern Italian region of Abruzzo, which is often considered “the greenest region in Europe.” The winner of ItalfestMTL’s Il ­Piccolo Leonardo art competition, which is open to submissions from children ages 4-12 until July 23, will also be announced during the festival.

More than anything, the MISQA festival is an opportunity for young musicians to learn from professors who are (or were at one point) members of highly regarded string quartets. Over the course of two weeks in mid-August, violinists from across the world will speak and perform at MISQA, including Gerhard Schulz, Heime Müller and, for the first time since MISQA’s inception in 2010, Juno Award ­winner Min-Jeong Koh.

The Meta4 Quartet and the Arcadia Quartet are each slated to play a concert, and Junior Quartet concerts will be held with free admission, with more concerts to be announced soon.

The event will also feature many genres of music, including folk and soul (Yao), electronic music (DJ Unpier), indie-pop (Céleste Lévis) and samba (Hamilton Beat Harmonic). Kids and families will have the opportunity to participate in Louis Bellmare’s Samajam Percussion School music show.

One of the recurring threads of the Toronto Summer Music Festival this July will be eight reGENERATION concerts, wherein many emerging musicians will perform alongside their mentors.

There will also be a lot of original arrangements and compositions at the festival: cello duo VC2 will showcase unique arrangements of Everlong by the Foo Fighters and Jean-Louis Duport’s Étude no. 2 in F Minor, the Loose Tea Music Theatre will present composer Afarin Mansouri’s new opera Zuleykha, and ­pianist Nicolas Namoradze will play four ­original solo piano compositions. The festival will end with a world première of Nicholas ­Denton Protsack’s Murmur from Thin Places.

The Collingwood Music Festival is a week-long series of concerts in mid-July that promote musical diversity, education and accessibility. The festival will hold several events free of charge, including: a screening of a Charlie Chaplin film accompanied by improvised piano; a tour through a forest filled with interactive, handmade instruments; and a live performance by Celtic folk duo A New Ground.

The festival will host an a cappella concert featuring The Ault Sisters, the FreePlay duo and the Hampton Avenue quartet. And Daniel Mehdizadeh, the Scarborough Philharmonic Orchestra’s composer-in-residence, has composed an original work that will be performed by the Penderecki String Quartet.

Since its humble origins in 1994 as an annual summer festival, Ottawa Chamberfest has grown into a year-round showcase of the world’s finest talent. Nevertheless, the summer festival remains one of the organization’s most eventful periods.

The festival’s full program will be revealed this month (June), but some already confirmed artists are the Juno Award-winning Gryphon Trio, the Danish String Quartet and the Canadian Brass quintet. Sounding Thunder: The Songs of Francis Pegahmagabow, a multidisciplinary work that tells the story of an Ojibwe military and political figurehead, and the debut of mezzo-soprano singer and Chamberfest artist-in-residence Rihab Chaieb will also be hosted at this event.

Opened in 2007, the Highlands Opera Studio in Haliburton, Ont., is back in August to host a series of operatic and theatrical performances. The festival will feature a performance of Tchaikovsky’s Eugene Onegin, as well as several discussions with professional singers about singing and opera.

Two operas written by living composers will also be performed: Ashley Au and Christene Browne’s Inertia, a story about two elderly women who must overcome their differences to avoid death, and Olivia Shortt’s The Museum of the Lost and Found, which focuses on how Indigenous communities are impacted by western attitudes toward missing-person cases.

Running from July 26 to Aug. 5, the Bach Festival is a celebration of classical music in Vancouver organized by Early Music Vancouver. One of the main events will feature a blend of classical and contemporary (specially commissioned) works performed by Ensemble Arkora, with erhu accompaniment by Lan Tung.

Of course, the festival will also highlight some of Bach’s compositions: Chloe Kim, Christina Mahler, and Avi Stein will present Bach: Four Sonatas and a Concerto, and the Pacific Baroque Orchestra will play Bach Kaleidoscope/Reimaginations. Most of the festival’s concerts will either take place at the Christ Church Cathedral or the Chan Centre for the Performing Arts.

The Saratoga Performing Arts Center in Saratoga Springs, N.Y., will be hosting a variety of events over the summer. The Ozmosys Band, the Amina Figarova Sextet, Galactic (featuring Anjelika Jelly Joseph), Matthew Whitaker, and SuperBlue, among others, will play at Freihofer’s Saratoga Jazz Festival on June 25 and 26.

Between July 27 and Aug. 13, the Philadelphia Orchestra will play 12 concerts, including Beethoven’s Ninth Symphony and a full musical accompaniment for a screening of Harry Potter and the Prisoner of Azkaban.

The Chamber Music Society of Lincoln Center will present the “Quintessential Quintets” and “Astounding Winds” performances, musical accounts of the history of string and wind instruments, and two concerts performed by the Escher String Quartet. 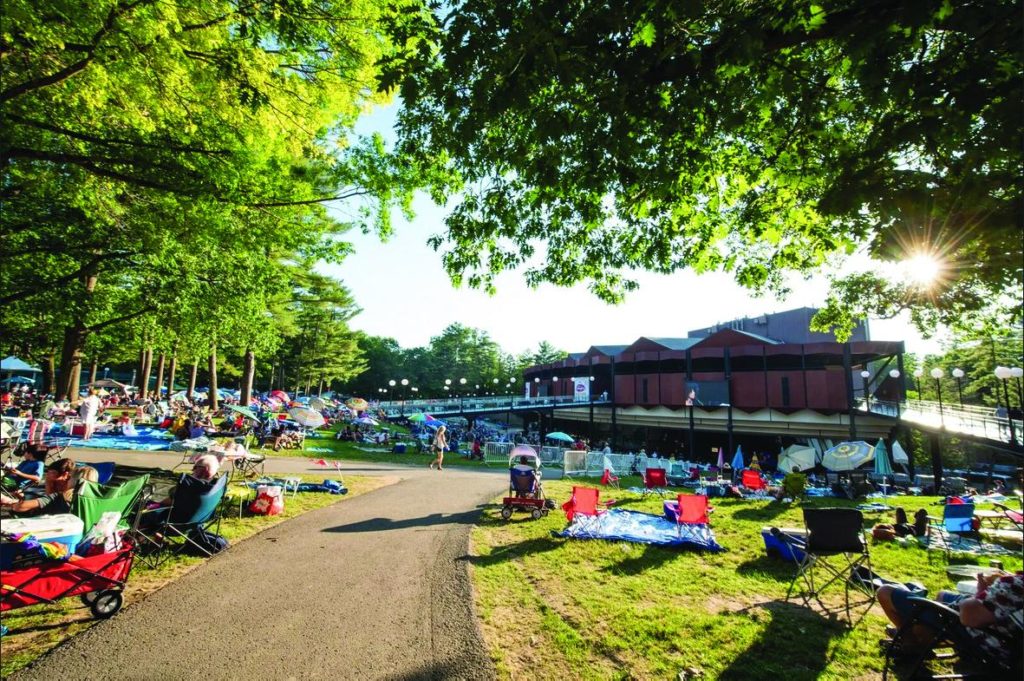