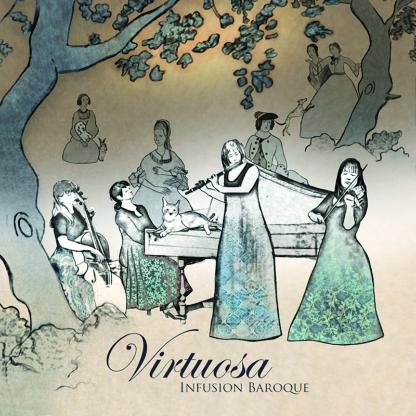 In 2017, Infusion Baroque released the Virtuosa Series, a collection of videos highlighting the musical careers of fourteen women from the 18th and 19th centuries. Still infused with the desire to emphasize female composers’ accomplishments in the face of sexism, Infusion Baroque have released their new album Virtuosa. The 14 works on the album, derived from a variety of composers, most of them women, display the ensemble’s tonal flexibility: in their performance of Clara Schumann’s Piano Trio in G Minor, Op. 17 they contrast the instruments to instill in the listener a feeling of uncertainty—the intermittent, staccato harpsichord supplies a tension that the legato violin constantly seeks to resolve. Meanwhile, their rendition of Hélène Liebmann’s Sonata in B-Flat Major, Op. 11 unites the harpsichord and other string instruments for a playful and harmonious experience. This contrast marks a difference in the composers’ social statuses, yet the works are all linked by the quiet, on-tempo breathing of the performers. This detail gives life to the theatrical emotions of the works, as if to suggest that all the featured composers, regardless of their social status, were united in their struggles.

Although the entire album is a joy to listen to, the works where flutist Alexa Raine-Wright takes centre stage are the most memorable. Flute Sonata in F major, composed by Anna Amalia, princess of Prussia, is one such example. Forbidden to study art under the oppressive thumb of her father, who thought such activities were a waste of time, Amalia practised the harpsichord, violin and flute in secret. Raine-Wright is careful not to overindulge in her performance of the princess’s flute sonata by playing at a low volume with a soft but high-spirited tone, the combination of which evokes the ideas of rebellion and personal gratification. Meanwhile, Flute Sonata in A major was composed by Wilhelmine von Bayreuth, Amalia’s older sister. The flutist maintains her volume and tone to suggest the shared secrecy in the sisters’ musical studies, but the quicker tempo and fluctuant rhythm convey the freedom von Bayreuth experienced because of her husband’s support.

Two other memorable aspects of Virtuosa are soprano Ariadne Lih, whose voice expertly complements the violin for a majestic interpre- tation of Paratum cor meum, and Linda Catlin Smith’s Versailles, the melancholic atmosphere of which is unlike any other work on the album.