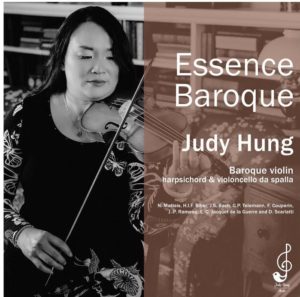 With a name like Essence Baroque, one would expect Judy Hung’s album to present a fulsome exploration of the baroque musical period, but the multi-instrumentalist only narrowly succeeds in this endeavour.

Violin works by revered musicians like Bach, Matteis and Telemann populate the album, but save for the fourth and fifth parts of Bach’s Partita in D Minor, No. 2, Hung’s choices of compositions are not particularly dynamic. While they are all performed with technical prowess, they do not help Hung display the expressiveness and grandeur one would expect from the baroque period.

Hung demonstrates her multi-instrumental capabilities by peppering in harpsichord works by Rameau, Scarlatti and Couperin. In isolation these works are much more engaging than their violin counterparts, but the scarcity of the harpsichord throughout the album creates a distinct lack of cohesion.

She redeems herself with Matteis’s Diverse bizzarie sopra la vecchia sarabanda o pur ciaccona, where she finally displays the richness of baroque music with a combination of the two string instruments. The addition of a third—the cello—adds much needed depth that makes for a satisfying ending, though it would have been much more impactful had the harpsichord been properly emphasized beforehand.