You are at:Home»La Scena Online»Concert Reviews»The Nutcracker: A tale told by a Romantic, signifying everything
Advertisement / Publicité

Les Grands Ballets performs The Nutcracker with loving attention to detail and 53 years of experience.

The author of The Nutcracker and the Mouse King, Prussian storyteller, jurist, composer, music critic, draftsman and caricaturist E. T. A. Hoffmann (1776–1822), rebelled against Enlightenment excess, with its emphasis on rational philosophy and the curtailing of the imagination. He and his German Romantic confrères strove to honour nature, memorialize innocence, and reclaim an authentic way of living. Sound familiar? Yes, it’s the 1960s in a Nutcracker—er, nutshell.

Hoffmann’s satirical and self-parodying tales pioneered the fantasy genre. His taste for the macabre combined with realism influenced Poe, Dickens, Baudelaire, Dostoevsky, Kafka, and Alfred Hitchcock. Like Alice in Wonderland or Le Petit Prince, The Nutcracker blooms perennially as we wither in the cruellest and most lethal of all the forms of our limitation: Time. 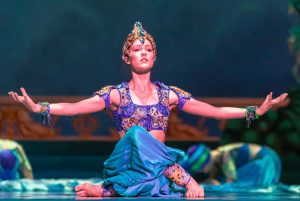 The music carries the message intact

Hoffmann’s novella captures a stranger and darker world than the Alexandre Dumas, père, adaption from which the ballet is derived. What in the story is a very real transformation and liberation, in the ballet becomes a lighthearted dream. But the music carries the message intact.

Tchaikovsky’s preternaturally inspired, wounded music conveys Hoffmann’s tale inviolate. As if to elucidate the ballet adaption of his story avant la lettre, Hoffman, in a famous, early essay on Beethoven’s 5th Symphony, wrote that music “reveals an unknown kingdom to mankind: a world that has nothing in common with the outward, material world that surrounds it, and in which we leave behind all predetermined conceptual feelings in order to give ourselves up to the inexpressible.”

From the sublimely cadenced suavity of the Waltz of the Flowers, to the crystalline sweetness of the Dance of the Sugar Plum Fairy, the composer exudes tender, ecstatic, richly detailed music as a spider exudes silk.

Tchaikovsky was a shy, moody, neurotic, and unhappy man. His music is often poignantly sad. But The Nutcracker is, for the most part, devoid of melancholy and full of good humour and cheerful invention. From the sublimely cadenced suavity of the Waltz of the Flowers, to the crystalline sweetness of the Dance of the Sugar Plum Fairy, the composer exudes tender, ecstatic, richly detailed music as a spider exudes silk. The descending scale melody of the Adagio of the Grand Pas de Deux is one of the most heart-stoppingly tender, touching, and perfect moments in Western music. 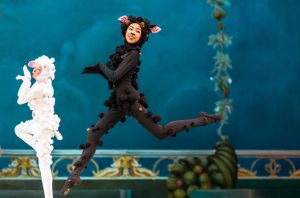 The ballet begins with its adolescent heroine, Clara, enjoying a gala Christmas Eve party. Clara (Latin for “bright,” “clear,” “distinguished”) receives a Nutcracker in the shape of a soldier (symbolism alert) from her godfather, the mysterious Doctor Drosselmeyer (German for thrush, whose song is among the most beautiful in the avian world, and who symbolizes hope; and “restrained, choked, worthless, source of light”). Her brother Fritz receives a toy sword. Clara’s parents are the kind of people who would lock up the Nutcracker and other gifts in a glass cupboard, so the children can look, but not touch. The parents are stuffy, successful, serious-minded people who look down on the kind of playful whimsy that Drosselmeyer represents. But self-revelation and achieved individuality depend on playfulness, the poetry of the psyche, and the beautiful and hopeful, but choked and “worthless” sources of light, carried by art. 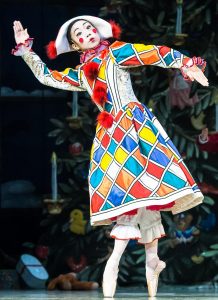 That night, unable to sleep, Clara creeps downstairs and witnesses a fierce battle between her brother’s toy soldiers—led by the Nutcracker—and an army of rats. The rats overwhelm the soldiers. But at the decisive moment Clara throws her slipper at the Rat King, distracting him. The Nutcracker Prince seizes the moment to run the Rat King through with his sword, saving the day. The Nutcracker transforms into a handsome human prince. He whisks Clara away to the Lands of Angels, Snow and Sweets. The King of Candyland, the Snow Queen and her Snowflakes, a Sugarplum Fairy and Spanish, Arabian, Chinese, and Russian dancers greet and entertain them. After experiencing this variegated Otherworld, Clara returns to daylight reality on a golden-winged swan.

The story of Clara and her Prince is one of those rare instances in art in which poetry, music, and dance coalesce into an Otherworld of felt significance.

The story of Clara and her Prince is one of those rare instances in art in which poetry, music, and dance coalesce into an Otherworld of felt significance. With Clara’s help, the Nutcracker Prince defeats the Rat King and escapes with Clara into a time-defying state of knowing and being. This state gives birth to art, music, and poetry. It breeds the fascinating but inadequate formulations of religion, philosophy and psychology. It awakens the imagination of every receptive child and open-minded adult. It may be, as in Shakespeare’s Macbeth: “A tale told by an idiot, signifying nothing.” Or it may be a tale told by a Romantic, signifying everything. 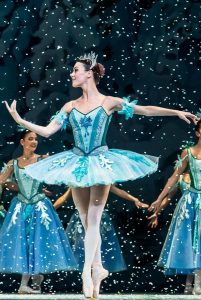 The Nutcracker is the most-performed ballet in the world. In Montreal, as in hundreds of other cities and communities, it centres a Christmas tradition adored by children and adults alike. For those whose sensibilities and nervous systems can attune to its music, choreography, costumes, and poetry, it is a microcosmos of joy, mystery, beauty, rapture, and tears.

Les Grands Ballets has captured the music-box precision and serene grandeur of The Nutcracker every year since 1964. When you perform a ballet hundreds of times, you get very good at it. At 53 years, this Nutcracker is the longest-running show in the same venue in all of Canada. The choreography of Fernand Nault (1920–2006) and the costumes of François Barbeau (1935–2016) radiate an abiding magic. And at Saturday’s 2 pm première, the adrenalized spectacle of the excited children in the lobby of Salle Wilfrid-Pelletier was almost as entertaining as the ballet itself.

The production involves 165 characters and more than 300 costumes. This year, Québec star talk show host and producer Julie Snyder joined the dancers onstage and performed well as Clara’s grandmother. As the Sugar Plum Fairy and her Cavalier, and in the Grand Pas de Deux, the gravity-less perfection of Vanesa Garcia-Ribala Montoya and Raphaël Bouchard elicited gasps from the audience. As the madly-costumed King of Candyland, Andrew Giday brought Johnny Depp-like gifts for physical comedy, repeatedly setting the audience on a roar. As Clara, Adriana Diaconu, well, is there anything on earth more graceful and touching than a dancing child?

The Grands Ballets Orchestra, led by German guest conductor Florian Zieman, gave an emotionally disciplined reading of the score. The Nutcracker is Tchaikovsky’s Sgt. Pepper. In good hands, light and shade and detail fall into their settings like precious multifaceted stones set by a master jeweler.

Witness and participate in this dream-like annual ritual and its loving attention to detail. Faithfully observe its intricate rites and sacraments with your husband, girlfriend, children, niece, or your friend’s sister’s nephew. It’s the perfect Montreal Christmas benefaction.

The Nutcracker, choreographed by Fernand Nault to music by Tchaikovsky. Until 30 December at Salle Wilfrid-Pelletier, Place des Arts. For tickets and further information, visit grandsballets.com