For the past two decades, Julie Vincent has been pursuing her creative explorations in various lands of the Americans fomr Quebec to the Southern Hemisphere. Going solo or co-directing, she has safeguarded and is still safeguarding the destiny of Singulier Pluriel.

One day, André Brassard (a mentor who directed her in two Michel Tremblay plays, among others) told Vincent that she will “always belong to the second world [where artists take risks and a position, contrary to the first world, which is more consensual and elitist].” The director’s observation is a fitting illustration of the reach of the North-South axis developed by the company.

On the other end of the line, the actor, playwright, director and artistic advisor at the National Circus School passionately expresses herself on the path of Singulier Pluriel, from its beginnings to present day, while an intriguing theatrical work is currently being presented at the Chapelle de l’Espace Fullum: Valparaíso by Dominick Parenteau-Lebeuf (under the direction of Vincent). Everything emerged in the early 2000s at the time of the presentation of the play Le Marin by Portuguese writer Fernando Pessoa, also staged by Vincent.

“I’d been hauling this text around for 15 years. When I proposed it to different theatres, no one wanted to take the risk of putting on this static drama.” Alongside Danièle Panneton (who co-directed Singulier Pluriel until 2004), Marthe Turgeon, and Isabel Dos Santos (originally from Portugal), she performed in an independent production at Jean-Claude Germain Hall. The presence of an actor born outside of Quebec and the encouraging feedback incite the desire to forge ties between cultures – “being Québécois means being someone who’s unfinished.” 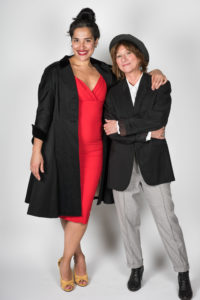 A quote by Pessoa (“everything was multiple and we know nothing of any of it”) gave Julie Vincent the taste to conceive new adventures throughout trips and meetings between Quebec and South America. Since then, the ages and stories, as intimate as they are political and social, combine with and confront each other. The French and Spanish languages rub shoulders or respond to each other. After Le Marin, Julie Vincent wrote and supervised, on top of playing in (with other interpreters), La Robe de mariée de Gisèle Schmidt. In 2010, it was up to Portier de la gare Windsor (also written and staged by her) to charm critics and curious theatregoers at Fred Barry Hall in Montreal and in Buenos Aires. This story of comings and goings centred around a vagabond architect from Uruguay, exiled in the Quebec metropolis after the coup d’état of 1973, took root in the biographic account of the theatre figure’s recently deceased friend. The protagonist also has a great affection for the poetry of Gaston Miron and Michèle Lalonde, as the jolts of the 2005 student strike roar in the background. The connections between the North and the South will carry on next year between Montreal and four South American countries with Vincent’s solo performance in Jocaste, a myth retold by Uruguayan playwright Mariana Percovich. In Soledad au hasard, from the pen and under the direction of Julie Vincent, a Quebec photographer who is a victim of the financial crisis of 2001 in Buenos Aires connects with an Argentinian student exiled to Montreal during the Maple Spring of 2012. 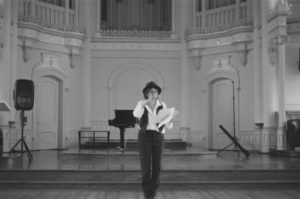 Also written and orchestrated by Julie Vincent, La Mondiola “is imbued with a popular alternative practice in the independent circuit of Buenos Aires and Montevideo: presenting theatre in a house [an idea of Singulier Pluriel’s co-director since 2016, Ximena Ferrer, a creator from Montevideo].” The North-South axis is also echoed among her models, “masters of the avant-garde,” such as Argentinian playwright and theatre director Mauricio Kartun, one of the founders of the independent theatre of this American land, “an inspiring being who nurtures his own garden,” or Gabriel Calderón, an artist from Montevideo who wears many hats (writer, actor and director) like the versatile Quebec artist.

An admirer of Dominick Parenteau-Lebeuf’s dramaturgy for years, the co-director and co-founder of Singulier Pluriel seized the opportunity to develop a partnership with her. With its multiple layers, Valparaíso (named for a port city in Chile) fits into the globetrotting company’s repertoire perfectly. Among other characters, we’re introduced to a young androgynous Chilean girl who arrives in Montréal with her mother. She wanders through the streets of the city and has her whole existence disrupted by a lockbox in the archives of the Sisters of Providence. Her relationship with her ancestors is entangled in an incessant tango between Quebec and Chile between the 19th and 21st centuries. For Julie Vincent, it’s “an imposing play, with all its dimensions inserted one into the other [like Russian dolls]. In her writing, Dominick felt a need for transformation both in from and in content.” A line of women called out to her, including an unknown Quebec nun who had played an essential role in Chile. The dream of a woman fleeing through the trapdoor of a house made sparks. “She recognized her childhood house in Saint-Blaise-sur-Richelieu [a city where many patriots lived],” says Julie Vincent.

To illustrate these resemblances and divergences between the cultures of the North and the South, Julie Vincent cites a memorable quote by Michel Garneau, a poet for whom she has a particular fondness: “Generations don’t cancel each other out. You have to go and look for others (than your own) not to die.” This philosophy of exchanges and plural meetings will certainly guide the entire team from Valparaíso with the steps of travellers.