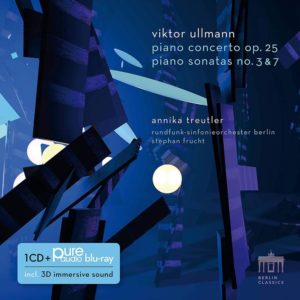 In a dark moment of isolation, I found myself thinking of Viktor Ullmann (1898-1944) a student of the atonalist Schoenberg and the microtonalist Haba who never really found his voice until darkness descended and he faced segregation and extinction. Before 1939 he’d enjoyed fragments of international attention, with a piano sonata premiered in London at the Wigmore Hall and a few more glimmers of invitation.

In 1939, after the Germans occupied Prague, he set about writing a piano concerto for Juliette Aranyi, a fellow-Haba student, knowing it might never get performed. Both composer and soloist were deported in 1942 to the Theresienstadt concentration camp, where Ullmann wrote three more sonatas and Aranyi gave a mostly-Mozart recital. Both were entrained in October 1944 to Auschwitz, where Ullmann was sent to the gas chamber on arrival and Aranyi, with her child, soon after. That the music they hoped to make together survives at all is a miracle and a mystery, some of it involving the scholar H. G. Adler who brought them out to London.

The concerto is an engagingly frisky work, full of positive ideas, its two-minute finale founded on a juvenile fragment of Mozart’s. The sonatas are determinedly darker, atonal at times but pulsing with upbeat rhythms. The 3rd sonata ends with a Mozart theme, the 7th with variations on a Hebrew folk tune. Ullmann, it seemed, could turn his hand to anything.

Annika Treutler is a highly persuasive soloist in this Berlin production, with a radio orchestra conducted by Stephan Frucht. Treuttler captures the attractive lightness of Ullmann’s mood, surpassing the gloom of a previous Czech recording. Ullmann, in isolation, dug deep and found wit and humour. When life returns to normal, a major orchestra should give it a go.