When Christopher Rouse died ten months ago, aged 70, it seemed to spell the end of a line of American composers who placed the symphony at the heart of their art. And not just Americans. Apart from Kalevi Aho and Leif Segerstam in Finland, David Matthews and Philip Sawyers in the UK and one or two Russians and Germans,  composers seem to have given up on the symphony in the 21st symphony. The assumption is that audiences have lost interest. Is that really the case? In these Covid times, we have no way of judging except on record. 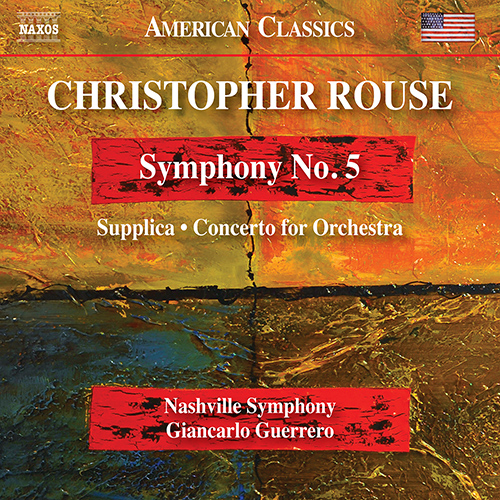 Rouse, an expressive talent from Baltimore, wrote symphonies all his life, always working on a new one, six in all. He also composed 11 concertos and a requiem. Rouse was fixated with orchestral sound and how it might be made relevant to modern audiences. His fifth symphony references Beethoven’s in micro-quotations of musical phrases – not so much in tribute to the master as in a kind of running commentary on his Fate theme and where it might develop into an orchestral conversation on a much larger scale.

Rouse was big and brash and loud, but also delicate and refined. He kept the harp fully occupied and allowed the strings to control the atmosphere even in the noisiest passages. His handling of orchestral colour is virtuosic and his knowledge of public taste and tolerance restricts the symphony to a tight 30 minutes. Giancarlo Guerrero conducts the excellent Nashville Symphony with suppleness and subtlety. The half-hour passes very fast.

Two other pieces on the album – Supplica (2013) and Concerto for Orchestra (2008) – contrast soft sentiment with searing instrumental power. I am beginning to think that what Chris Rouse wrote was not big symphonies but an intimate series of love letters to the orchestra, an endangered species in our short-span century.