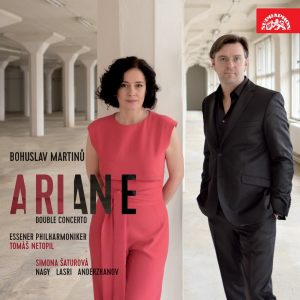 I am beginning to wonder if posterity will ever place Bohuslav Martinů where he justly belongs, as the last in a quartet of Czech geniuses, after Smetana, Dvořák, and Janáček. With each passing year, Martinů (1890–1959) seems to recede further into the mists, his 16 operas unstaged, his six symphonies unperformed. Czechs find him too cosmopolitan – he lived most of his life in France and the US – while others are daunted by his mountainous output. There are more than 400 recorded works by Martinů, all of high proficiency. When the innocent ear catches Martinů for the first time, it recognises a  sound world that is at once distinctive and entirely approachable, ever the mark of a great composer.

The present disc consists of a frivolous, one-act French opera based on an over-used Greek myth, and a concerto for extraordinarily unusual forces. I saw 11 of the Martinů operas around the time of his centennial and I wouldn’t rank this 40-minute shortie among the top three. Written in his last year of life, as light relief from the heavy labours of his Greek Passion, Ariane makes few exceptional demands on either singers or listeners while offering consistent surprise and delight. The coloratura soprano Simona Saturová sings the title role in this concert performance from Essen, conducted with dancing flair by Tomáš Netopil. It is all over much too quickly, and you can’t say that of many modern operas.

The concerto, written for two string orchestras, piano and timpani in 1938, is a glorious exercise in spatial awareness, a test of your friends’ ears as to which speaker is producing what. Crisp, catchy, subtly emotional, it is – I guarantee you – unlike anything written by any other composer, dead or alive. That’s why you need to hear it. Except on Wikipedia, it hardly matters whether Martinů was as “great” as Smetana, Dvořák, or Janáček. He was a true original, and an immensely appealing one. There are never enough of those to go around.