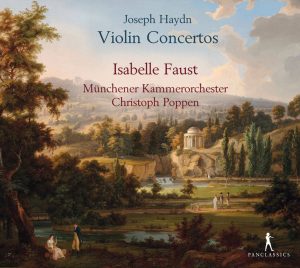 It must be a seasonal thing. When fresh mushrooms simmer and asparagus gently steams, it starts raining …Haydn. Sure enough, four Haydn releases have landed this month. Decca has a positively frisky set of four symphonies, 78-81, from Ottavio Dantone and the Accademia Bizantina.

The period-instrument precision is awe-inspiring, a worthy counterpoint to that epochal Decca set (1969-73) of Haydn symphonies from Antal Dorati and the Philharmonia Hungarica. Dorati changed the weather for Haydn while, with 104 symphonies, confirming the prejudice that the composer wrote too much. Other conductors gave up midway. I like Dantone’s note-perfect approach very much and hope he sticks to the later symphonies

Onyx, a boutique label has two Haydns this month – the cello concertos rom Pavel Gomziakov and the Orchestra Gulbenkian, directed by its concertmaster. Gomziakov plays a 1725 Stradivarius that lives at the national museum in Lisbon. The cello tone is gorgeous, but the tempi are a tad safe.

I much prefer Shai Wosner’s performance, on the same label, of three Haydn piano concertos interspersed with works by György Ligeti. Wosner is such an intelligent artist I wouldn’t lightly pass up anything he records. The Ligeti concerto, with the Danish radio orchestra, pulullates with morbid Magyar wit. The Haydn, however, pales by comparison.

It was only after scouring the small print that I grasped that an ear-opening first release of three Haydn violin concertos was recorded 19 years ago at a live concert in Schloss Elmau, Austria. The soloist, Isabelle Faust, plays with passion and vitality, taking wild risks and contributing (I think) her own cadenzas. The Munich chamber orchestra, conducted by Christoph Poppen, manages to stay in touch. The sound is a tad astringent but the liveness compensates. Of the three concertos, my marginal favourite is the A-major but it’s too close to call. There an infinity of happiness and invention in these pieces, at least as much as in the Mozart violin concertos. Why on earth don’t the Haydns get played more often? Or at all? Why are orchestra chiefs still afraid of Joseph Haydn?