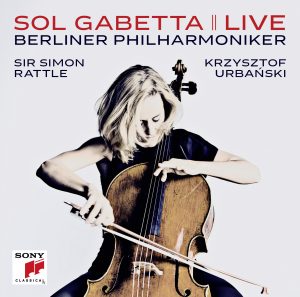 The Argentine-born Sol Gabetta, now in her mid-30s, made her first recording of the Elgar concerto six years ago in Denmark, an impressive performance stressed ever-so-faintly at the edges by the long shadow of Jacqueline Du Pré. In this live concert with the Berlin Philharmonic and Sir Simon Rattle, Gabetta is more languorous and, one suspects, more herself. The opening phrases are so leisurely you can imagine half the orchestra taking an illicit sip of tea from an under-chair flask, knowing there is plenty of time before they have to come in. But her tempo is immediately convincing and musically coherent. It pays off with a transcendent pair of inner movements in which beauty is never defeated by melancholy and the tremors of an old man’s regrets are laid to rest with a blessing.

Untouchable as Du Pré’s recording will always be, Gabetta has a distinctive way with Elgar – sensuous, consolatory, ultimately uplifting. Rattle seems content to follow her lead and the Berliners sound almost cowed in the (lightly recessed) background by her serenity, her lyricism and her radiant confidence.

The inevitable comparison is with Alisa Weilerstein’s Decca recording four years ago, with the Berlin Staatskapelle conducted by Barenboim, who first learned the concerto as Du Pré’s husband. To their credit, both artists put Du Pré totally out of mind in an interpretation marked by emotional restraint and contextual depth, itself a milestone in this concerto’s history yet conceptually as different from the new Gabetta recording as Darjeeling from Earl Gray.

Where Weilerstein chose the 21st century Elliott Carter concerto as her companion piece, Gabetta plays the D major concerto by Bohuslav Martinu, written in 1930, revised in 1945 and unheard (due to political vicissitudes) until 1965. Martinu is a thumbprint composer, instantly recognisable. His opening movement is peppered with familiar skittishness and melodic fractures, but the andante soars to sensational flights of fantasy, superlatively played by Sol Gabetta and held firmly in check by the Polish conductor, Krzystof Urbanski, in the superior sound of the Berlin Philharmonie. The woodwinds have a party in the finale. You keep wondering why this concerto is not played all the time. You will certainly want to hear this account over and over again.

This is five-star music making, no doubt about it.