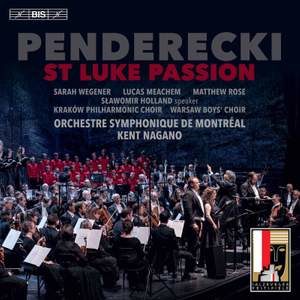 After the atonal terrors of Threnody for the Victims of Hiroshima, his breakthrough work, Penderecki dismayed both the western avant-garde and the atheist Polish state by writing an overtly devotional church oratorio. Premiered for the 700th anniversary of Münster cathedral in West Germany in March 1966, it was greeted with shifting unease and polite reviews.

By presenting it as ‘a homage to J S Bach’ the composer only increased the confusion. Penderecki was Catholic, Bach Lutheran. Nowhere in this hour-long recitation of modernist discords and vocal shrieks can the orderly and respectful spirit of Bach be definitely ascertained.

Heard again, after an interval of decades, the work has gained integrity. Atonality is used to excite and affront listeners; the composer will not leave them in peace. He practically exhausts the language of atonality before the work is finished. The closing passages dig into Gregorian chant and church processionals. Whatever peace there is will come from God, not from a mortal composer. After this work, Pendrecki belonged to no musical style or movement but his own.

The welcome release of this 2018 Salzburg Festival opener by Kent Nagano, his Montreal orchestra and two Polish choirs is a timely tribute to a composer who found his voice in fits and starts. It has at once the dignity of a devotional work and the drama of the greatest story ever told.  We will not hear its like again in the next few years, for reasons no-one had foreseen. Keep it on your shelves as a reminder of how the world sounded before it was shrunk by Covid-19.