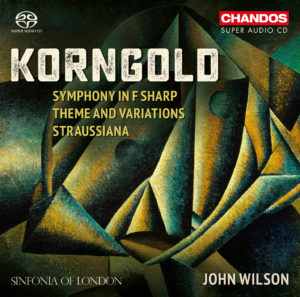 At the end of the Second World War, Hollywood’s most influential composer turned his attention to recovering his lost prestige in the concert hall. Erich Wolfgang Korngold had taken the precaution of retaining copyright in his movie scores so that he could reuse their themes in symphonic works. He set to work on a violin concerto for Jascha Heifetz and an uncommissioned symphony in F, anticipating no shortage of interest from orchestras in search of popular music.

His hopes were soon dashed. The concerto was derided by New York critics when it reached Carnegie Hall and the symphony, after a shabby Viennese premiere, was not heard again in the composer’s lifetime. There was nothing wrong with either piece. What Korngold misjudged was the changed climate and his unadorned reliance on movie themes, which went down badly with more serious listeners.

The first two movements of the symphony are brass-heavy Errol Flynn swashbucklers, the adagio is midway between late Brahms and Mahler, and the finale is back to Hollywood for a happy ending. The Sinfonia of London and John Wilson make a jolly good fist of this frisky material without fully convincing me that it deserves to be taken more seriously than, say, the symphonic music of Waxman, Rosza and other  daytime toilers in the dream factories.

The two companion pieces are engaging – a set of theme and variations that Korngold wrote for American schools orchestras and a suite of Straussiana that he knitted together from family waltzes. Both are charming in an olde-worlde way. They turned out to be his last works.