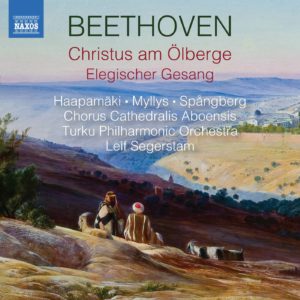 Never one to leave his audience short of music, Beethoven wrote this oratorio for an 1803 Vienna concert that already consisted of his first two symphonies and his third piano concerto. Since he only finished the oratorio on the morning of the concert, rehearsals were scratchy and the musicians bad-tempered. Even at this distance of time, it is hard to tell how they made any sense of this episodic work, which veers from flights of inspiration to pedestrian note-filling.

At its most sublime – the orchestral introduction and the tenor aria ‘my soul trembles’, we hear Beethoven finding raw materials for Fidelio and the ninth symphony, touching untapped depths of the human soul.  Even at its most mundane, however, one is left breathless with admiration for Beethoven’s orchestral fluency, his integration of woodwind and brass and his ability to keep the flow going through a fairly plodding script. The writer, by the way, was editor of an evening newspaper.

Although it was fairly popular in 19th century America, the work has not been much recorded – hardly at all, in fact, by conductors of the first rank. My personal preference until now has been Eugene Ormandy’s 1964 Philadelphia take with massed choirs and soloists Richard Lewis, Judith Raskin and Herbert Beattie.

I am inclined to believe that this new recording surpasses that heavyweight version in almost every respect. Leif Segerstam, the wild baton of Finnish music, finds just the right tempo for telling a dramatic Biblical story. The Turku Philharmonic and their local cathedral choir have both delicacy and heft, and the soloists – Hanna-Leena Haapamäki, Jussi Mylls and Niklas Spangberg are absolutely top-drawer. Track six – Hail, the redeemer – goes straight into my file of blind-testings. Sensational music, brilliantly performed. If only the work was at this lievel throughout.