This season, maestro Kent Nagano reflects on the tradition, identity, and and the universal character of music. Pianist Serhiy Salov, clarinetist André Moisan, soprano Sharon Azrieli Perez and the OSM Chorus join the OSM to interpret – in addition to works by Mahler and Bernstein – an epic work by Brian Current, winner of the Azrieli Music Prize, The Seven Heavenly Halls, and a spectacular Klezmer Clarinet Concerto by Wlad Marhulets, who won the young Azrieli Prize for Jewish Music (Oct. 19, 8PM, Maison Symphonique). www.osm.ca 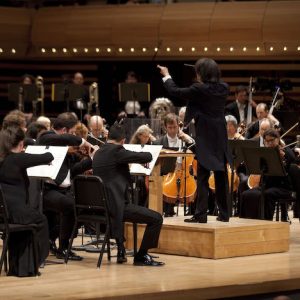 Kent Nagano and the OSM Chorus

Born in Moscow and living in Canada since the age of 14, virtuoso Ilya Poletaev will present a recital of works by Bach, Schumann, and Enesco. Considered one of the most preeminent pianists of his generation, Poletaev has won numerous awards, competitions, and scholarships (Oct. 20, 7:30PM).

For a change, comedienne Alexandrine Agostini will make you fall in love with Quand j’étais italienne by Sylvie Laliberté. She will be accompanied by Philippe Noireaut on the piano (Oct. 23, 3PM). www.ville.montreal.qc.ca/chapellebonpasteur 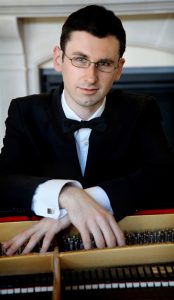 Celebrating their 20th anniversary with a North American tour, the prestigious KlangVerwaltung Orchestra, accompanied by the Chorgemeinschaft Neubeuern Chorus, under the direction of Enoch zu Guttenberg, will present two masterworks of the classic repertoire: Mozart’s Requiem and Bach’s Magnificat. Established in Munich, the orchestra is comprised of musicians from various renowned orchestras, acclaimed soloists and chamber musicians as well as young laureates and professors (Oct. 21, 8PM, Maison Symphonique). www.placedesarts.com

Formed in 2008 by four graduates of the Conservatoire national supérieur de musique de Lyon, the Quatuor Hermès won the the first prize at the International Chamber Music Lyon 2009 and the first prize at the 2011 International Competition in Geneva. In 2012, they received one of the first prizes from the Young Concert Artist Auditions in New York. Subsequently, they were invited to perform at Carnegie Hall and the Kennedy Center in Washington, DC. Since 2013 they have been in residence at the Fondation Singer-Polignac. Quatuor Hermès performed Schumann’s complete string quartets in 2014, producing a critically-acclaimed recording and winning several awards (Oct. 23, 3:30PM, Pollack Hall). www.lmmc.ca