Completes their much-awaited survey of

“Simply stunning … jaw-dropping agility, clarity and accuracy in the playing, allied with terrific dynamics and nuance, outstanding ensemble work …I doubt if you’ve heard these works sound like this before – it’s absolutely essential listening.” – The WholeNote (on Beethoven, Op. 18, Vol. 1)

For Immediate Release, May 9, 2019, Toronto, ON … When British label CORO Connections released their first recording from Toronto’s Eybler Quartet last spring, they may have been surprised to have a controversy on their hands. The Eybler’s versions of Beethoven’s Op. 18 quartets, nos. 1-3, on period instruments, took many aback due to their astonishing speed, particularly in the scherzo from Quartet No. 1. Gramophone called it “straight-up hilarious … this set might infuriate you or it might delight you,” continuing, “ either way, I suspect, Beethoven would have been more than happy.” The Times of London bemoaned that “this brilliant Canadian quartet [left]me feeling my age … yet there is no denying the Eyblers’ verve and delicacy of touch.” Now, the new recording of the Beethoven Op. 18 Quartets, nos. 4-6 fulfils the wish of Early Music America, who wrote last year: “With nearly 70 minutes of masterfully played Beethoven, this recording leaves you waiting for the Eybler to complete the Opus 18 cycle.” The new release is available in digital form from May 31, with the CD version for sale as of June 7.

The musical controversy arose from the Eybler’s choice to follow Beethoven’s original and supposedly “impossible” metronome markings – which have caused some to speculate on Beethoven’s sanity – to the letter. As an early music quartet, the Eyblers approached Beethoven’s Op. 18 as “new music,” working from different editions of the score while delving deeply into exhaustive critical notes on the works. Violist Patrick Jordan comments, “Looking back through the almost 200 years since Ludwig van Beethoven’s death, it is remarkably easy to repeat to ourselves the narrative of Beethoven’s transcendent seriousness, greatness and genius.” However, he continues, “we also discovered depths of humour, wit and irony in Beethoven that we had not found before, in particular his ready embrace of the commedia dell’arte.” Jordan’s unusually witty liner notes describe the almost operatic Quartet no. 4 in C Minor, with its “blisteringly fast coda”;  the cheerful Quartet no. 5 in A Major, with its “lilting Ländler” leading to a “slightly tipsy” Trio; and the Quartet no. 6 in B-flat Major, which “displays the widest emotional range to be found in the set.” 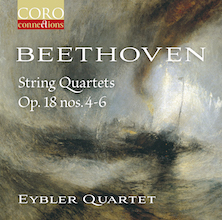 The Eybler Quartet brings a unique combination of talents and skills: years of collective experience as chamber musicians, technical prowess, experience in period instrument performance and an unquenchable passion for the repertoire. Violinist Julia Wedman and violistPatrick G. Jordan are members of Tafelmusik Baroque Orchestra; Violinist Aisslinn Nosky is concertmaster of the Handel and Haydn Society and Principal Guest Conductor of the Niagara Symphony Orchestra; Julia and Aisslinn are also members of I FURIOSI Baroque Ensemble. CellistMargaret Gay is much in demand as both a modern and period instrument player. The Eybler Quartet’s previous, critically-acclaimed albums include chamber music of Vanhal, Haydn, Mozart, Backofen, and of course, the quartet’s namesake, Joseph Leopold Edler von Eybler.