You are at:Home»La Scena Online»Interviews»Vijay Iyer and Craig Taborn: A Joint Venture and Beyond

With no shortage of means at its disposal, the Festival international de jazz de Montréal is set to party in style this year, and with good reason. Of the many ways to celebrate its milestone 40th edition, it has programmed a series of five concerts showcasing the ECM label. Like the festival, this Munich-based company has a long history behind it, 50 years and counting, with no signs of sitting back and resting on its ­laurels. Of the scheduled acts (outlined on the ­following page), one stands out: the two-piano duo of Vijay Iyer and Craig Taborn. Highly touted in today’s contemporary jazz circles, these musicians issued, earlier in the year, their first official recording. Entitled The Transitory Poems, this album culminates a musical association of some 20 years, half of which they have spent together performing as a duo. 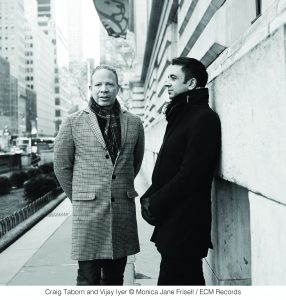 Since their joint stage debut, they have, by Iyer’s count, played a good 50 concerts, and their Montreal appearance brings to a close a run of concerts coinciding with the release, their next one set for the fall at Wigmore Hall in London. Beyond their joint ventures, they pursue independent careers, both as bandleaders and very-much-in-demand sidemen. With their own personal histories, both ­players have found a way of spinning out finely etched musical tales, all of which are magically distilled on the spur of the moment.

While not novel, piano duos are more of an ­exceptional occurrence. With 88 keys twice over, no other pairing of instruments approaches this one in terms of range. Using all those keys can be hazardous at times, but Vijay Iyer and Craig Taborn are experienced enough to steer away from the problems yet retain the risk factor in their playing. Their collaboration has allowed them to achieve a high level of discipline, even in the context of total improvisation, to which they committed themselves from day one. While Taborn was first noticed in the mid-1990s, ­manning the keys behind the saxophone phenom James Carter, his counterpart emerged early in the new century. Now in their late forties, both keyboardists are at the peak of their ­powers. Their discographies are further proof of their solid credentials, their careers undoubtedly ­bolstered since entering the ECM fold.

The association with Carter, Taborn ­recalls, came about while pursuing his BA at the ­University of Michigan, in the saxman’s home state. Touring extensively and recording for DIW in Japan, the pianist would land his first leader date for that label in 1995, a trio outing. Two years later, he was recruited by avant-garde saxman Roscoe Mitchell for his nine-piece Note Factory, playing second keyboard next to Matthew Shipp. Although he is not clear on his very first meeting with Iyer, his future musical associate recalls it vividly.

“I had just finished my doctorate in California (a thesis on musical cognition) and came to New York in late ’98,” Iyer says. “Early in the New Year, I attended a performance of Mitchell’s group at the Knitting Factory, and that is where I first met Craig. Around 2001, Roscoe needed a sub for Shipp in a smaller version of that band, and someone referred me to him. (Maybe Craig had something to do with it.) I was flown in last-minute for a ­European tour. And I say “last-minute” ­because I landed in Italy right before the first show and got on stage, music unseen.”

A year later, the two pianists finally came ­together when they took part in an intensive week of rehearsals and recording at Mitchell’s then residence in rural Wisconsin, all in preparation for a new Note Factory album. “Roscoe is very demanding,” Taborn notes. “You have to work hard to learn his music.” To get a handle on it, the pianists agreed on doing some ­rehearsing on the side. Iyer remembers some of the intricacies, like parts out of step by a ­sixteenth note.From then on they kept in touch, without really thinking about performing as a duo one day.

Fast forward to 2010, when composer Derek Bermel, a fellow alumnus of Taborn, ­invites them both to play in a concert series he was booking at Princeton University. In preparation, the pianists spent a whole week in the show room of the old Steinway building, then across the street from Carnegie Hall. Before too long, they decided to exclude any written materials and just go for it, with no safety nets. Their bet would pay off, so much so that it would become their modus operandi.

All Improv… or Just About

When asked about the reasons behind their decision, Taborn opines: “For us, it was a question of always moving forward, and improvisation was the most ­interesting challenge in terms of making use of our sets of skills. Sure, we could compose things to work with, but in the context of this duo, and given our ­resources as ­improvisers, it was like ­offering us a ­solution to a problem we had not come across. So, as long as we do not have to face a problem – and having been successful with this all improv format since the beginning – we will continue in that vein.” 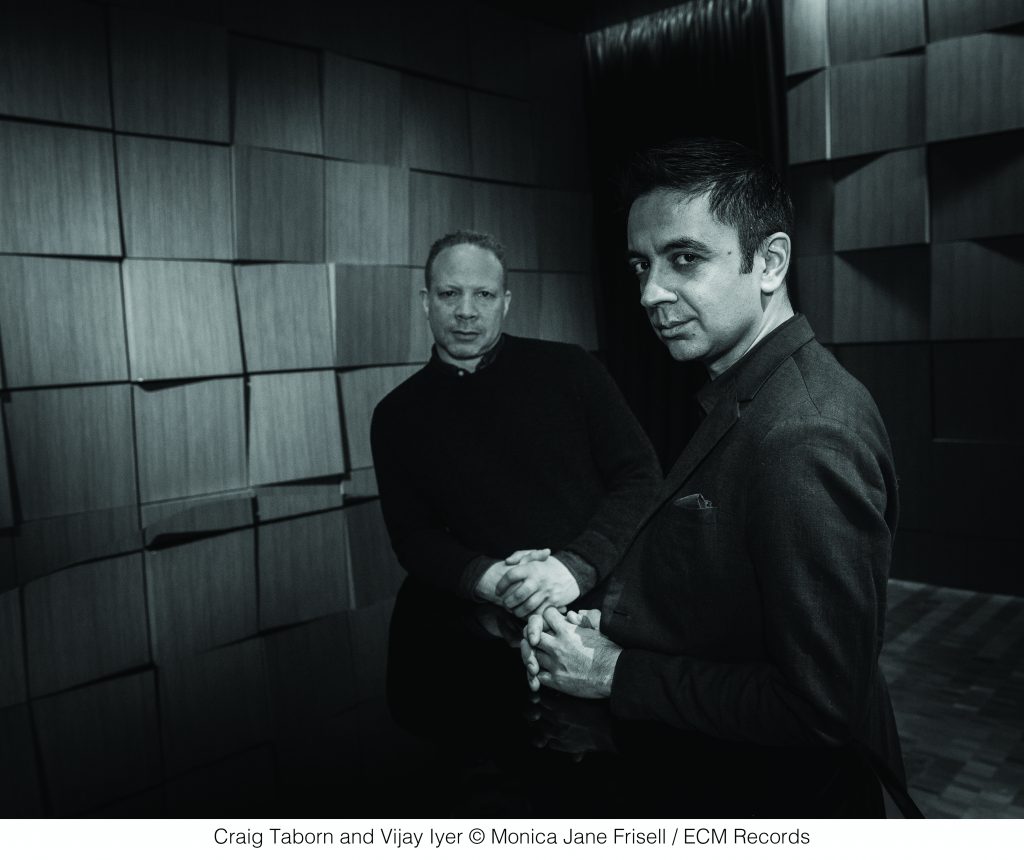 While this piano duo is the one they ­pursue most assiduously, both have tested the waters with other colleagues. Iyer has sparred with Amina Claudine Myers on several occasions, performing as well with his contemporaries Andy Milne, Jason Moran and Kris Davis, the latter having also recorded with Taborn (see album ­review in this section). When not juggling his many sideman chores, Taborn leads an adventurous quartet of standard instrumentation (tenor sax, bass and drums). Its music is also documented on the ECM label; the most recent effort, Daylight Ghosts, was issued in 2017. His partner has been just as active on the recording front, ­making his way at first with a series of trio albums for the Act label before ­joining the ECM fold. Two years ago, he ­issued a sextet album (Far From Over), this group performing last month in ­Quebec at Victoriaville’s new music fest, the FIMAV 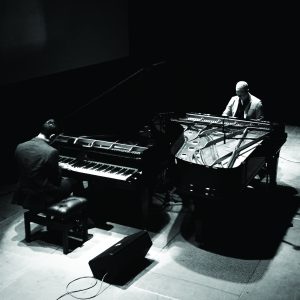 During their concert of last year, the one now on record, the pianists slightly bent their rule by incorporating a melody written by the late Geri Allen. “We have played her music ­before,” Iyer explains, “on our own and ­together, so we try to pay her our respects when we can, if the circumstances lend themselves to that. I introduced her piece When Kabuya Dances towards the end, in a spot where we were in the right tonality, but our version is like a lament, quite different to her own rendition, which was more driving and rhythmical.

Worlds of their Own

As busy as they have been in the first half of the year, there is plenty in the offing for both. In the weeks preceding his Montreal ­appearance, Taborn will be in studio with ­saxophonist Steve Lehman, perform solo concerts, duos with laptop and live-electronics specialist Ikue Mori, and take part in a quartet tribute to Geri Allen featuring Ravi Coltrane. Also in the works is a second solo album for ECM, eight years after his ­critically acclaimed solo debut Avenging Angel. Iyer, at this time, has no firm ­recording commitments, but will be working out a new repertoire with trumpeter Leo Smith for some European dates in the fall. Also on the drawing board is a new group he calls the Ritual Quartet, with a saxophonist and two instrumentalists from India, the ­native country of his parents. The strong musical bond between them almost begs the question as to what they appreciate the most from each other. Iyer, for his part, is somewhat reluctant to ­answer at first, finding it difficult to reduce some 20 years of shared experiences to one thing, but demures anyway. “The main thing for me is his restless and inquisitive nature; he’s always taking in new information, challenging himself, growing and evolving all the time, and that is what we should all be about.” In contrast, Taborn volunteers the following answer without hesitation: “He’s an incredibly thoughtful player. His approach, his process if you will, is definitely an expanding one, you see that in how he engages himself improvisationally in each concert. That alone says a lot about his musical personality.”