You are at:Home»La Scena Online»Interviews»A Tale from Vienna: The Bösendorfer Story
novembre 2015 November 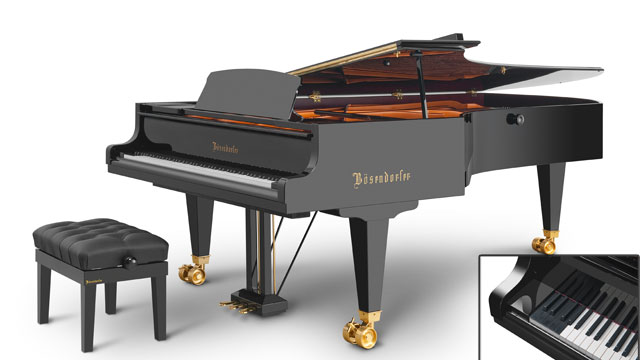 Bösendorfer. The name itself stands for something grandiose, majestic, even noble. At times, some have even said that there are pianos and then there are Bösendorfers. Its fame is in no small part due to its Imperial model, complete with nine extra keys in the lower register and covering eight complete octaves. Referred to as the most expensive piano in the world, retailing over 200 grand, if you have to ask, this instrument is not only impressive to see, but also to hear. At just under three meters, this Model 290 (the number referring to its length in centimetres) remains the grandest of all pianos. But it is only the tip of the iceberg for a company that produces a whole range of models in different sizes, including uprights, assorted finishes, custom-made designs and limited editions.

Founded in Vienna in 1828, coincidentally the year of the passing of Franz Schubert, the L. Bösendorfer Klavierfabrik has a checkered history behind it (see timeline sidebar). A family enterprise for its first eighty years, it passed from father Ignaz Bösendorfer to his son Ludwig and has changed hands four times over the last century. Its current owner (since 2008) is the Japanese music instrument giant Yamaha.

In a city so proud of its glorious musical tradition, elite institutions and artisan instrument makers, this takeover met a certain considerable hostility (note- there some was relief that the company was being purchased by a financially sound company in the music industry)  and in its wake, a wave of apprehension. How would this Japanese multinational manage an enterprise so steeped in a tradition of instrument making from a distant era? Bösendorfers, it must be noted, are built at great expense, with obsessive attention to detail, in a most labour-intensive way, and not according to the rules of mass production and quick turnover governing our modern world.

Brian Kemble, the soon-to-retire managing director of the company, whose main administrative quarters and showroom lie in the shadow of the Vienna State Opera, has spent the last five years in the company there, so he can readily vouch for its business-as-usual approach. “Actually, since Yamaha has taken over, the company is more Austrian than ever,” he states, citing as an example the making of the cast iron frames: previously, this was done in the neighbouring Czech Republic, but it has now been relocated to a specialist foundry in the country. This national pride is built into each instrument, starting with the types of wood. With the exception of some precious woods (used as inlays or veneers), all others are native to the country. Spruce, which comprises 80% of the wood components (unrivalled by any of its competitors) is carefully selected from trees in elevations above of 800 meters and cut before Spring, when the sap is at its lowest. Of the trees felled, all face northwards, another factor that contributes to their slow growing and close grain which is best for sound. From there it is then stored for three to five years in the yard of the company’s plant (and headquarters) in Wiener Neustadt, just under an hour south of the capital). Following an initial cut, the pieces are stored for about three more months in a temperature- and humidity-controlled environment so as to reach the desired level. But this is just one of many examples of the exceptional standards this company maintains.

This facility, which was moved out of the city in 1973, employs 120 workers, each and everyone highly specialized in his own trade. Ferdinand Bräu, its senior technical manager, notes that this is very much like a family business, in that several people have been with the company for decades, he himself being in its employ since the late 1970s. Such experience notwithstanding, the company also provides work for five apprentices on a regular basis, ensuring steady renewal in the workplace.

Anyone with a good ear for pianos will tell you about the uniqueness of sound. The pianist Rainer Keuschnigg once stated: “A Bösendorfer is truly Viennese. It possesses all the elements of the varied Viennese traits of character where both the smiling and weeping eye are to be found.” But one may ask: what is the secret behind its unique character? Of course, there are several factors, but one crucial element is to be found in its resonance case principle. Unlike other makes, the Bösendorfer is built in the Viennese tradition in a manner similar to that of a stringed instrument (violin, viola, cello). Other grand piano manufacturers who use many laminations of hardwood to make the rim, Bösendorfer uses thick solid spruce tonewood as the core of the rim. Slots cut in it allows it to be shaped around the inner rim. Thus, when a key is struck, the whole construction (made entirely of spruce) becomes acoustically activated and allows the entire body of the instrument to resonate as stringed instruments do.

While Bösendorfer stands for a tradition of piano making that is uniquely Viennese, it is far from being a throwback to another time. In recent years, it has worked with industrial designers in other fields to produce pianos with a distinctively contemporary flair. In collaboration with the design companies of twin German automakers Audi and Porsche, it has come up with some unusual designs, the former creating a cover that sweeps down to the ground (see illustration). On the reverse side of the coin, the piano maker has turned to history in its Baroque, Louis XVI and Vienna models, not to overlook its period piece lines named after Frederic Chopin, Johann Strauss and Franz Liszt. However, its most important technological breakthrough to date has been the development and marketing of its CEUS integrated recording and playback system. Although it has incorporated integrated midi-systems since the late 1980’s, this new one, developed a decade ago with two Austrian high tech firms, has achieved an unparalleled level of sound reproduction. Even concert pianists have been taken by its capabilities of capturing the subtlest dynamic shadings and accuracy of attack. 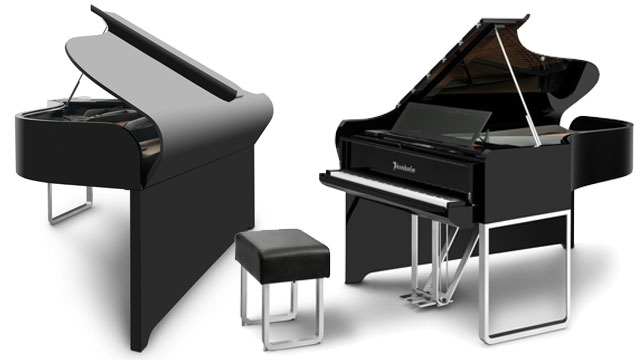 After the launching of a limited edition “Cocteau” model in Europe this summer (with a silk screened reproduction of the famous French artiste’s drawing of Orpheus inside its lid), Bösendorfer stages another first in its exclusive artist edition series, this time in our own Canadian backyard: on December 11, in Toronto, it inaugurates its Oscar Peterson Signature Edition. Limited to 12 instruments, the 200E3 Version will be on display. This instrument will use Yamaha E3 Disklavier technology and will be preloaded with 13 Oscar Peterson songs which have been painstakingly recreated from earlier recordings. Oscar’s signature is engraved on a brass plate set into the key block and also silkscreened with the opening bars of one his pieces next to the music desk. Staged at Korner Hall, this event will showcase several Canadian jazz pianists, among them Montreal’s own Oliver Jones and the Queen City’s Robi Botos (winner of a jazz competition in Montreal a couple of years back). Coinciding with the 90th anniversary of the late pianist’s birth, the concert will be performed on Oscar Peterson’s own 290 Imperial grand.

All told, the future of Bösendorfer seems to be well assured under the auspices of Yamaha. Mr. Kemble, once again, notes that it has gained tremendous marketing powers over the past eight years, with no concessions whatsoever to its standards. The Bösendorfer ethic, as he says, is nothing less than “precision through engineering and perfection through handwork.”

» www.bosendorfer.com
Downloadable 80-page catalogue, including historical outline, models and a section devoted to the actual making of the instruments)
A magazine with news and latest developments.

» Several videos available on YouTube, some presenting the instrument, some of actual concert performances.