Retrospective” usually brings to mind the work of an artist in late career, but for Mona Mariana Ciciovan, the title of her latest solo exhibit is a celebration of her first two decades of evolution as an artist in Montreal.

Since she and her husband came to this city with “four bags and two little girls” she has forged an impressive career, with solo or group shows almost every year and a permanent presence at the Galerie d’Art Images Boréales. Her work can be found in public and private collections in several major cities in the United States as well as in Singapore, Australia and her native country, Romania. Once a year she welcomes the public in her own studio/exhibition space, Espace Mara.

It has been an arduous and joyful journey, with most of her energy dedicated to painting almost every day. The show features paintings both large and small, as well as drawings illustrating the path she has followed so far.

Ciciovan’s development was unusual, in the sense that she did not begin with figurative painting and then move to abstraction. “For me, abstraction was the beginning.”

Perhaps she was guided by her earliest memories of her childhood in Pintic, a tiny Romanian village, to which she still needs to return from time to time. “There were very few resources,” Ciciovan recalled. “No cinema, no library, there was a little church but no hospital. There were no distractions and I learned to love solitude. I used to look at the sky for hours. There wasn’t much else to do.”

She recalls playing with mud, modeling it as if it were clay, always using her imagination. Her Grade 1 teacher, who must have noticed her gift, gathered her watercolours and organized her first show for the enjoyment of her classmates. “I had a desire to play with anything tactile, perhaps that is why I now work in oil – the the smell, the texture, are so sensual.” Ciciovan often uses her hands when creating a painting. “I work with transparent glazes, so many layers. For me oil remains the most subtle medium.”

But her parents could not imagine their daughter making a living as an artist and, being good at math, her first studies were in the unlikely field of accountancy. After a few false starts, her dream of receiving a quality art education came true when she completed a minor in Fine Arts from the Université de Montréal and later a bachelor’s degree in Visual and Media Arts from the Université de Québec à Montréal (UQAM). “There were so many courses, from drawing to engraving, I wanted to try everything,” Ciciovan recalled. “I felt the time to work was now or never.”

In 2001 she met Michel Buruiana, a journalist, writer, impresario, and above all, a great lover of art, who became her agent. Although by 2017, when he died, she was managing her own career, she is aware of the impact he had on her artistic development: “He believed in me more than I believed in myself. He was always very honest with me. I knew that with him I could move forward, not to sell or to make money, but to reach something [in painting]that I so desire.”

Buruiana insisted that she learn more about art history and advised her not to exhibit until he felt she was ready. “He was a person of immense culture. I learned and worked more because of him than I did at university. He said we must know what others before us have done, to enlarge our perspective, to have discipline. He said without that, one’s work could remain superficial.” 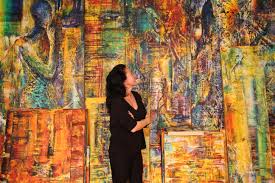 Photo: Courtesy of the artist

In retrospect, Ciciovan sees her work evolving as a spiral. “We start with what we know, expand and return,” she says. She always works in series, including her most recent, The Joy of Living, and others with evocative titles such as Memories, The Time of Secrets, The Land of Elders and Miorita, inspired by a book she read in childhood.

“People thought that I was repeating a theme,” she says, “but it’s more following through, like the pages in one book leading to another.”

Over time Ciciovan has recognized distinct phases in her work, as her colours have morphed from darker earth tones, to gold, to the joyful appearance of primary colours.

Now exploring different supports like white aluminium, she has incorporated into her process a 200-year-old Romanian glass painting technique used in iconography. It is the technique only, not the religious symbolism, that fascinates her, although painting icons on glass has seen a resurgence in Romania since the fall of the Communist regime. “I paint using a mirror,” she explains, as the actual painting is done on the back of the glass, starting with the foreground, in reverse order than one would apply to canvas or wood.

When creating in her studio, Ciciovan places the canvas on a table and looks down, rather than placing the support on an easel. She never uses photographic references and her process is purely intuitive. “In my work there are faces, birds, trees, but I don’t impose these forms, they are always abstract. I only give it a bit of shape to allow the viewer to discover images, based on his own vision and experience.”

It is important to take time when looking at a painting, she says. “A work of art can never be static. The more you look the more there is to discover.”