The 2016 Concours musical international de Montréal (CMIM), and the 5th violin competition, came to a definitive conclusion in front of a sizeable live and webcast audience on Thursday, June 2 at the Maison Symphonique. For the first time in the competition’s fifteen-year history, the competitors learned the results at the same time as the audience, holding everyone in breathless suspense up until the top-three winners picked up their violins to perform their concertos one final time with the OSM under guest conductor Giancarlo Guerrero.

Eighteen-year-old Japanese wunderkind Ayana Tsuji emerged as the unprecedented winner, gaining the jury’s favour for every marked prize. The list is staggering: The André-Bachand Award for the compulsory Canadian work ($4,000), best semifinal recital ($2,500), best Sonata performance ($2,000), best Bach performance ($1,000), best Paganini Caprice ($1,000), and the overall First Prize from the Ville de Montréal ($30,000). In fact, the only award Tsuji did not win was the audience-decided Radio-Canada People’s Choice Award, which went to second-place winner Bomsori Kim from South Korea. Japanese Minami Yoshida placed third. Tsuji closed out the Gala concert with an electrifying rendition of the Sibelius Violin Concerto. 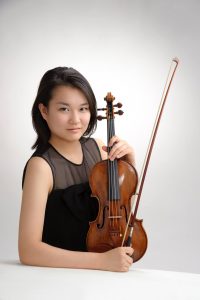 CBC Classical Community Producer Robert Rowat followed Tsuji closely over the course of the competition, the young violinist having caught his eye among the sea of 24 quarter-finalists. “I think the jury must have been impressed – as I was – that she was making an artistic statement with her playing,” says Rowat. “She has reached that level where she can rely on her technique and musicianship to take the music to the next level, to interpret. Some musicians never get to that stage, but when it happens, you know it. It’s like somebody has turned on a light.”

For Rowat, her performances achieved a degree of transcendence far beyond her years. “Her strongest performances were the Stravinsky Suite [Italienne] in her semifinal recital, which she built to a hair-raising climax, and the Sibelius concerto she played in the final round,” he explains. “When she plays, she appears to enter a sort of altered state in which she channels the music and sends it upwards. I found it tremendously moving.”

You can watch Ayana Tsuji’s performances online on the CMIM’s YouTube channel.