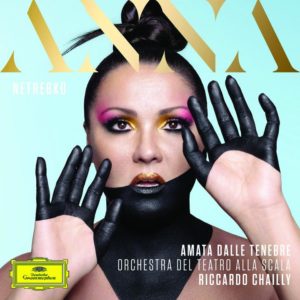 For her first solo album in five years, Russian soprano Anna Netrebko has graced her long- awaited release (Amata Dalle Tenebre) with a visual component videotaped during the recording date that took place at Milan’s La Scala. Four video clips of as many arias are offered as part of the package. In these selections, the singer is not only seen performing, but donning the costumes for each role, these being Aida from Verdi’s eponymous opera, Lisa in Tchaikovsky’s Pique Dame, Didon from Didon and Énée by Purcell and, finally, Isolde from Wagner’s Tristan and Isolde. Netrebko hired filmmaker Elena Petitti di Rorerto to direct these segments intercut with excerpts from an interview with the singer.  With the passing of time, the soprano’s voice has gained in depth, which allows her now to take on the aforementioned parts, a case in point being her remarkable mastery of the Aida role. While her soprano is as pristine as ever in the upper reaches, Netrebko occasionally swoops down into the mezzo range, below the one to which she has accustomed us. Rounding out the disc’s program are more excerpts from Verdi and Wagner and other arias by R. Strauss, Cilea and Puccini.