You are at:Home»Classical Music»Just the Right Touch – The Irish Repertory Theatre Presents O’Neill’s “A Touch of the Poet”
Advertisement / Publicité

REVIEW: of the Irish Repertory Theatre’s new production of A Touch of the Poet by Eugene O’Neill, running through April 17, 2022 in New York City (132 West 22nd Street; viewed here in previews on March 2 and post-opening on March 16, 2022).

With its current production of A Touch of the Poet, the Irish Rep triumphs again, offering an invaluably lucid and compelling treatment of one of Eugene O’Neill’s more underappreciated masterworks.

As early as 1935, O’Neill began to sketch out what he projected would be a massive omnibus dramatic hendecad exploring the moral evolution and shifting fortunes of one American family through several generations, from the Battle of Bunker Hill to the 20th Century’s Great Depression.

Of those planned eleven plays, O’Neill would fully complete only one. Originally referred to in his surviving papers as “Hair of the Dog,” the work would develop into the much more redolently and aptly titled A Touch of the Poet. 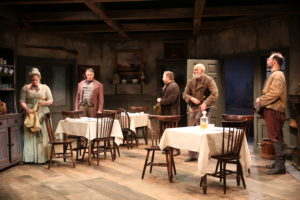 As with Long Day’s Journey into Night, O’Neill’s most universally lauded work, A Touch of the Poet was not performed until after the playwright’s 1953 death. Both plays are constructed along similar lines, observant of the Aristotelian unities of place and time (unfolding in a single location, in the course of a single day, with mounting tragic inevitability). Both feature dysfunctional families struggling to transcend their own psychic alienations, and both escalate to stunningly memorable concluding coups de théâtre.

Yet, while Journey is the acknowledged masterpiece, Poet has somehow been regarded more equivocally.

With the Irish Repertory Theatre’s current exemplary production of the latter, a critical revision upward might well be urged.

Changing of the Guard

The year is 1828 – a signal inflection point in American history. The so-called “Era of Good Feelings” that had sustained the nation in the decade or so following the War of 1812 is well over. Social fissures and class frictions are increasingly manifest.

It’s also an election year, with that aristocratic scion of the old guard, President John Quincy Adams, pitted against the insurgent Andrew Jackson, man of the people (who arguably had had the presidency stolen from him by Adams four years earlier).

O’Neill plays smartly on the contours of this larger social background, engineering a scale model of it within the structure of his domestic drama – a tale of patrician pretense, clashing values, and the wages of self-delusion. 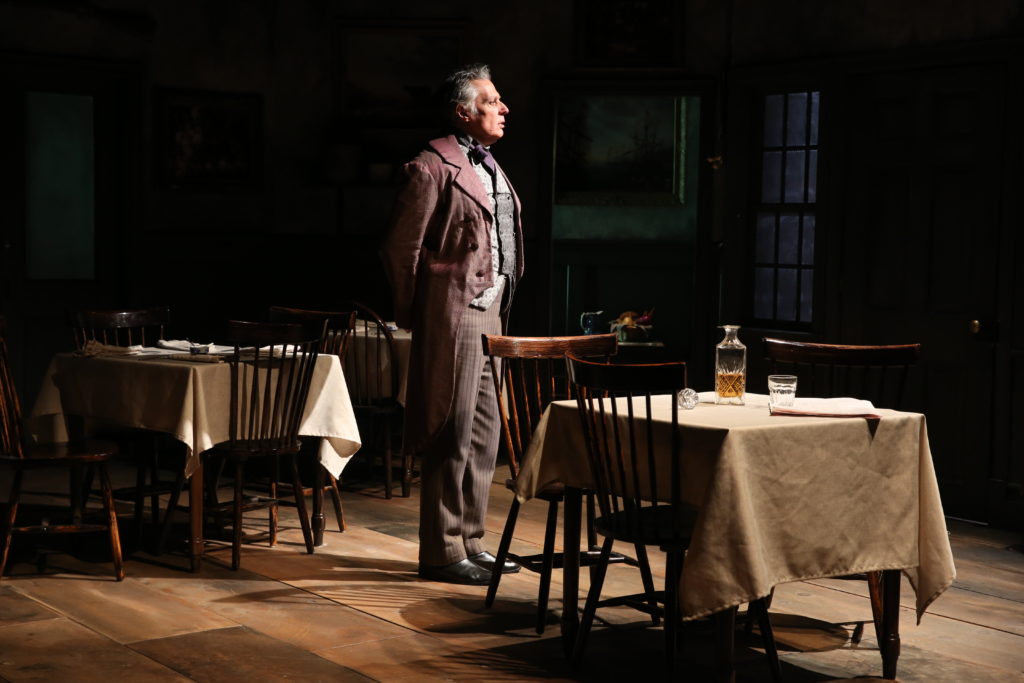 Cornelius “Con” Melody is the owner of a financially floundering tavern on the outskirts of Boston. It’s staffed principally by Con’s workhorse of a wife, Nora, and his restive, no-nonsense daughter, Sara, while its clientele are largely local Irish-immigrant laborers, ever keen on plying Con with blarney and blandishments in hopes of a free round of drinks.

And Con Melody is quite susceptible to flattery. He lives in denial of his own ambiguous pedigree, claiming a birth into petty Irish nobility who had fallen on misfortune. He had joined the British army, rising to the rank of major, and earning personal commendation from no one less than Lord Wellington for valorous service at the battles of Salamanca and Talavera. 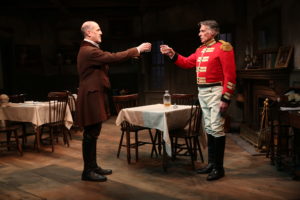 Con lets no one forget any of that.

Indeed, for Con, martial distinction is but a reflection of innate superiority, and he has fashioned a high and mighty, Byronic persona for himself as its vessel. He engages in grandiloquent soliloquizing before a mirror, quoting Byron’s Childe Harold’s Pilgrimage, “I stood / Among them, but not of them…,” and holds in disdain all things populist (such as his neighbors’ enthusiasm for Andrew Jackson) – or “Irish” (such as his wife’s brogue; not to mention her periodic recrudescence of Catholic guilt over having succumbed to Con before they were married – or had she seduced him?).

A Touch of the Poet is a virtual enchiridion of O’Neill’s dramaturgical innovations, starting with the clever vehicle of its opening exposition: “Tell me what I said,” Con’s cousin and former military companion, Cregan, says to the tavern’s barman, Mickey, concerning certain impolitic tales about Con that he had related the prior night, when in his cups, “and I’ll tell you if it was lies.” It’s a deft and dramatically credible way of getting the exposition underway – not to mention being thematically apt (booze being a principal dramatic catalyst here, as in so much of O’Neill).

Then there’s O’Neill’s noted gesture of plenary repetition of thematic tropes. One such in Poet is Con’s oft-mentioned coddling of an expensively well-fed mare. The insistent recurrence of discussion of the mare serves both to bolster the theme of Con’s extravagant self-image, as well as underline his besetting financial improvidence and impracticality – a trait for which Con’s daughter, Sara (as keeper of the accounts), constantly upbraids him. 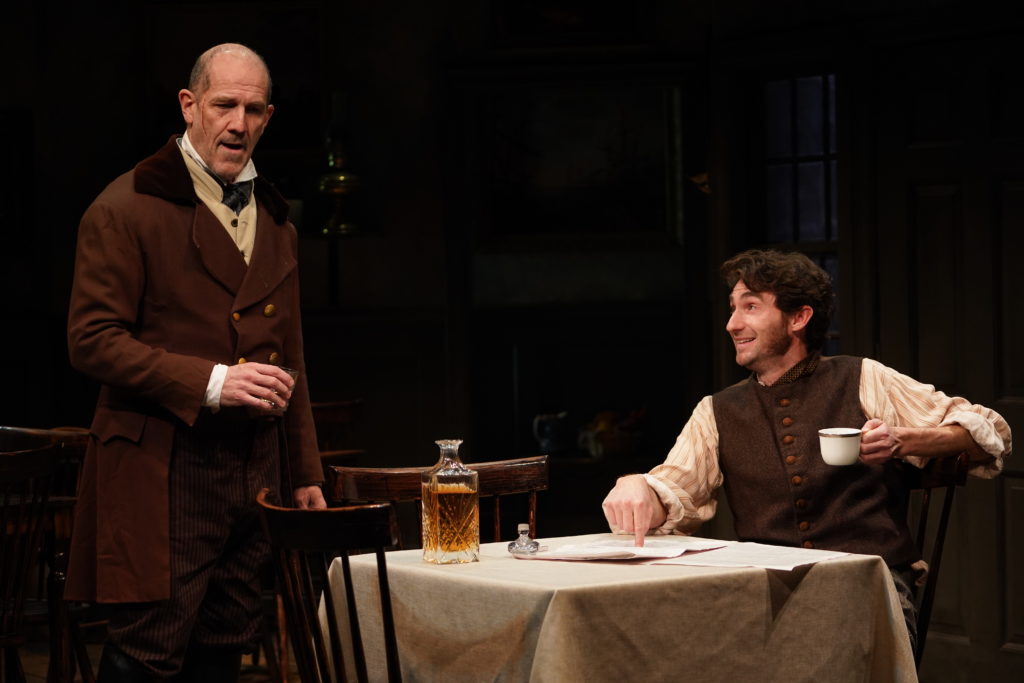 On the level of craftsmanship, the repetitions may represent O’Neill’s own attempt to reify metaphor for himself via redundant dramatistic conjuration – one senses in O’Neill’s creative process a certain auto-suggestive, self-persuading dimension; a constant attempt to conflate the concrete and the abstract, and eliminate the psychic space between them.

But on the level of stage enactment, the repetitions bring both rhythmic consolidation to the action, and a neurotic ring of real life. This is particularly true in the current Irish Rep production, performed as it is with utter conviction, and a full embrace of the amplitude and incantatory power of O’Neill’s distinctive voice.

(Plus, the mare is more than inert metaphor; like Chekhov’s gun, it’s there as the eventual trigger of a major dramatic payoff).

Interestingly, at the initiative of O’Neill’s widow, Carlotta, A Touch of the Poet was first produced in Sweden, partially on the basis of O’Neill’s own acknowledged admiration for and influence by the works of Swedish dramatist August Strindberg. It might well be proposed that A Touch of the Poet, at least so far as its scrutiny of connubial relations goes, is a kind of reflection of and inversion of Strindberg’s own anguished family drama, The Dance of Death. 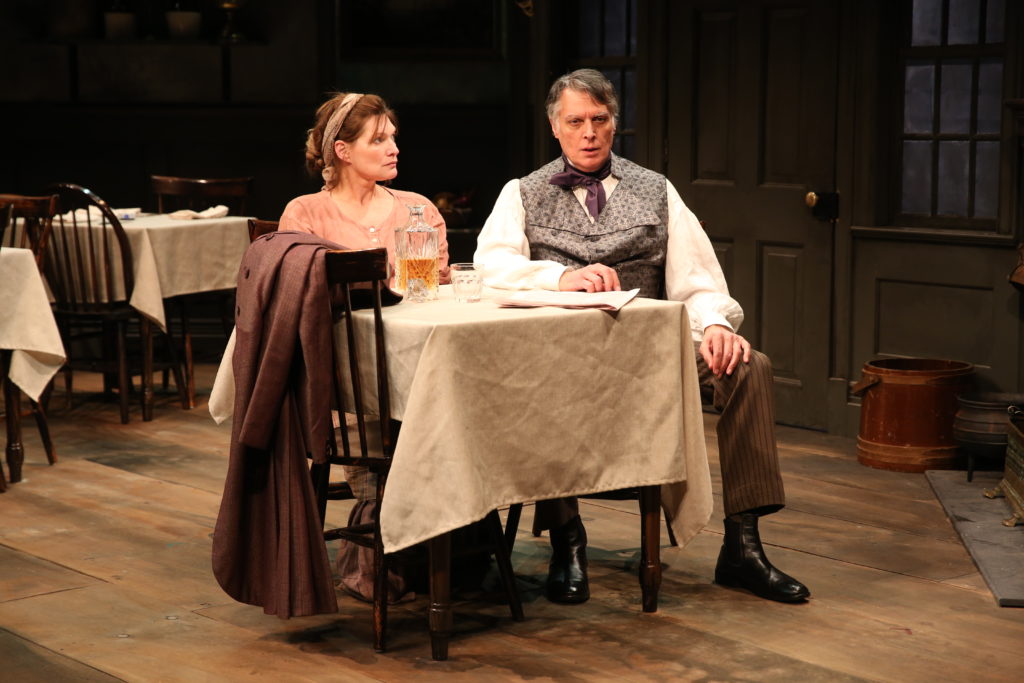 In the Strindberg play, a military martinet and his wife, living in a desolate backwater, are locked in a death-grip of mutual hatred from which, due to social mores and legal prohibitions, they cannot escape. The drama traces the explosive course of the couple’s toxic wranglings and mutual recriminations only to arrive at a tragic stasis – a full circle of futile inflictions poised no doubt to begin all over again.

In A Touch of the Poet, the protagonist, Con, likewise balances his ego tremulously atop an exaggerated narrative of past military glory. He, too, undergoes periodic seizures of contempt for a wife of decidedly peasant mien. But beneath a repeated whiplash pattern of insults, apologies and reconciliations, O’Neill has nonetheless managed a delicate counterpoise, limning a marriage undergirded by authentic and perduring love –distinguishing generative aspects of A Touch of the Poet that contrast sharply with the bleak sterility dramatized in Dance of Death.

In the Poet’s Corner

Director Ciarán O’Reilly has helmed a production that racks up successes on every level, from the performances of all the principals, to the seamlessly integrated accomplishments of his various design and technical teammates. His staging is fluid and virtuosic, frictionlessly transiting from naturalism to expressionism and never faltering in its forward motion toward Con’s final reckoning with himself. 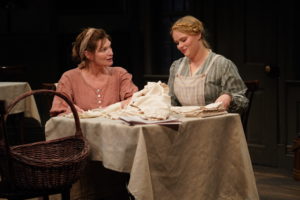 Aykroyd also notably exerts a mesmerizing theatrical thrall in a late-play excursus on women’s capacity for love. It’s a shimmering instance of only-in-O’Neill epideictic exoticism that Aykroyd executes to perfection.

Kate Forbes brings a delicate and pliable resilience to the role of Con’s long-suffering wife, Nora, making fully persuasive – even appealing – a constancy in the face of abuse that could well come off as distasteful if handled with less commitment.

James Russell plays the barman Mickey Maloy with a winning smile and a genial virility, while Andy Murray plays Con’s quondam military comrade/underling, Jamie Cregan, with a pitch-perfect admixture of truculence and obsequiousness. 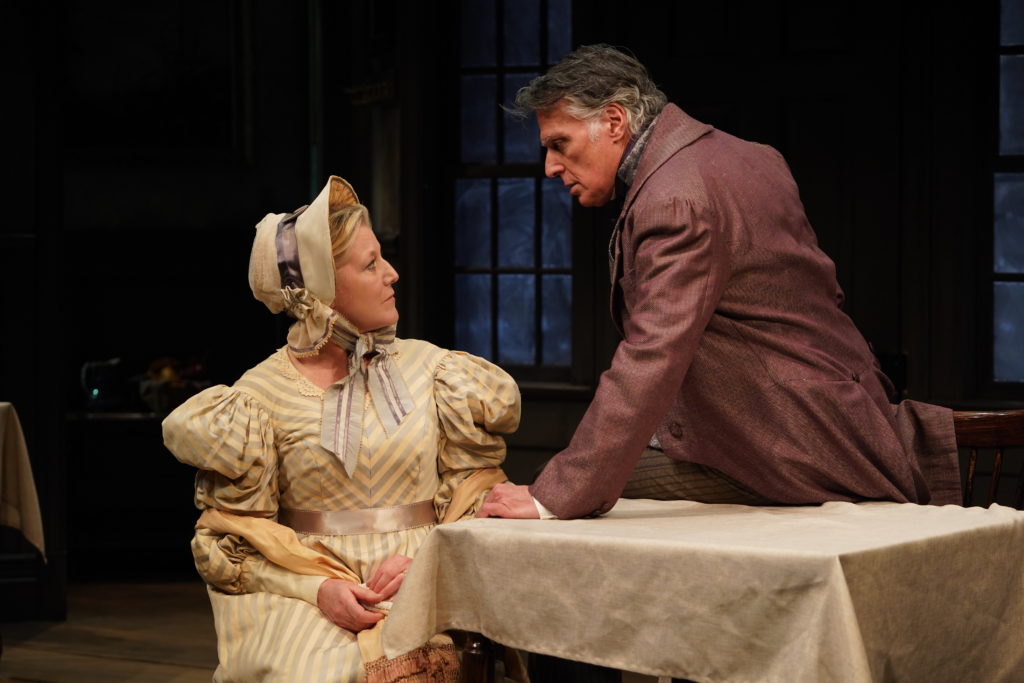 Finally, as Cornelius “Con” Melody, Robert Cuccioli has crafted a performance of towering dimensions. It is hard to imagine a more fully realized portrayal of O’Neill’s complex antihero –vain, yearning, narcissistic, passionate, delusional, rapturous. volatile, haunted, charismatic, courtly, brutal, broken and doomed. Countless moments of Cuccioli’s performance become instantly indelible, from his first entrance – his eyes gazing glassy and harrowed, his gait tentative, his hands shaking in the throes of an epic hangover – to his final tempestuous exit as he thrashes against the onset of a terrifying psychic transfiguration. 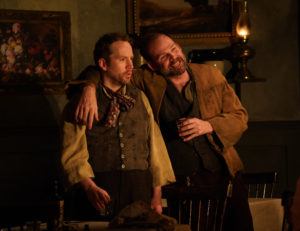 David Beck, David Sitler, and Rex Young fill out the production as the various tavern-flies and hangers-on with a vibrant and organic collective dynamic, while John C. Vennema does a memorably austere turn as a dour attorney.

Charlie Corcoran’s set design, depicting the interior of the tavern’s shabby-genteel dining room, is a wonder of authenticity and detail. Costumes by Alejo Vietti and Gail Baldoni are scrupulously well-observed. M. Florian Staab’s sound design is rich and absorbing, beautifully augmenting Ryan Rumery’s darkly brooding incidental score. Michael Gottlieb’s mood-enhancing lighting is exquisite, and especially bewitching in its period-perfect evocation of candle and lamplight in the production’s second half.

More information about, and tickets for, the Irish Repertory Theatre’s production of A Touch of the Poet may be accessed at https://irishrep.org/show/2021-2022-season/a-touch-of-the-poet-3/