The idea for an opera version of James’ Hilton’s 1934 novel, Goodbye, Mr. Chips, had been germinating in composer Gordon Getty’s mind for decades – ever since, as a young man, he saw a re-release of the celebrated 1939 film adaptation starring Robert Donat (in an Academy Award-winning performance as the eponymous character) and the beguiling Greer Garson.

But other projects intervened, and Hilton’s diffident title character was jostled to the rear of Getty’s docket, in favor of theatrical works featuring decidedly more flamboyant characters and more highly fraught scenarios, such as Plump Jack (Getty’s Falstaff-centric opera) and Joan and the Bells (which deals with the trial and martyrdom of Joan of Arc).

Then, as recently as three years ago, Getty was given a copy of the original Hilton novel.  He read it, and that’s when Mr. Chips seized him again.

“It took me only about two years to complete,” Getty says.  “I work fast – once I get started.”

“Goosebumps.”  That is Getty’s tersely eloquent reply to the question of how he knows whether a subject is fit for his musical treatment – and it was the somatic reaction Getty experienced on meeting Hilton’s fictional man-in-full.

For those unfamiliar either with the Hilton novel or any one of the several film and television adaptations that have followed, the story sketches out the life and career of a mild-mannered classics teacher at a British all-boys boarding school, Mr. Chipping (Hilton never disclosed a first name) better known to colleagues and generations of students alike as Mr. Chips. The novel is episodic and cozily conversational – but at its heart is the tale of Chips’ mid-life transformation within the crucible of a potent and utterly unlikely encounter with love. A forty-eight -year-old Chips meets (and is at first confounded by) the remarkable Katherine Bridges – a compelling combination of feisty modernity, intelligence, intuition and capacity for empathy. She’s young enough to be Chips’ daughter. But differences in age and temperament notwithstanding, Kathie is moved by Chips’ gentility, and motivated to minister to his seemingly untapped emotional latencies.

Marriage ensues, and a new Mr. Chips emerges.  Under Kathie’s influence, Chips’ previously rote teaching style transforms into one of humor, sympathy and warm encouragement – a rebirth that will thenceforward engender the affection and regard of the young men Chips cultivates, and sustain him through the rest of a long life.

Getty’s Goodbye, Mr. Chips was originally commissioned by Festival Napa Valley for live stage performance. But, with the advent of the sudden stultifying restrictions of COVID-19, the festival pluckily opted to take the pandemic head on, retool and develop Getty’s work as a film.

The prospect might be said to have carried a certain irony for Getty, who has elsewhere spoken of the influence that great film scores have exerted on his aesthetic.

“Movies, after all, are spoken operas,” Getty has remarked (in his liner notes for Joan and the Bells), “where the score tells us what to expect and how things feel.”

Thus, the notion was both inspiring and apt; the details, however, proved thorny.

Each of the principals then recorded his or her vocal tracks separately to the already-recorded score, and would lip-synch to them later during actual filming – both practices that are standard recourse in film and pop video, but alien to the experience of most classical singers.

For the crucial element of the rank and-file students who form Mr. Chips’ tightly circumscribed universe, the company drew on the forces of the Young People’s Chorus of New York City.  Recorded and filmed in various groupings in New York, these young singers were integrated later into the principal photography in California.

Director Brian Staufenbiel and his technical and design team have crafted a cinematic experience that is stylish, imaginative and visually arresting, with shots that toggle between character close-ups (conveying a sense of intimacy, interiority, memory), and wide angles on the production’s expansive soundstage (a ringed array of set pieces around a full-size dollhouse-like simulation of Chips’ boarding house sitting room), reminding the viewer of the work’s essential theatricality and understated monumentality.

In penning his own libretto for Goodbye, Mr. Chips, Getty has hit on a number of clever stratagems, all nicely concealed by the text’s deceptively polite fluency. 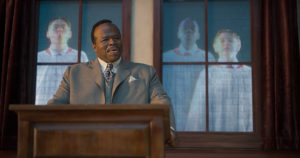 Getty’s first felicity was to couch the whole as a memory piece narrated by Chips’ friend and physician, Merivale. The entire opera thus becomes a kind of dialogue between the doctor and the remembered Mr. Chips – an innovation that markedly improves on Hilton’s original, more conventional omniscient narrator design.

Within this structure, Getty further transits freely and fluidly among timeframes in Chips’ life – a stream of consciousness condign to ‘organic memory – but at the center of it all, there is constant reversion to the primary epoch of Chips’ life:  his all-too-brief but profoundly transformative relationship with Kathie.

Getty’s score is characteristically rich, layered and long-arced, with especially exquisite string voicings, vivid base lines, and a number of lovely and affecting motivic recurrences. There are several remarkably moving arias and set-pieces for Chips – one celebrating his newfound capacity for both pain and joy; one cataloguing the grim sacrifice made by all too many of his former students in the Great War; one ruminating on what it might have been like had Chips’ and Kathie’s son survived her death.

And Getty reserves his most lush and passionate music for the opera’s final, full-throated blossoming.  Reinforced by galactic cinematic imagery, Kathie returns in an orchestral apotheosis, helping Chips sees the quiet yet consummate symmetry of the life he has lived, and the undeserved grace he has been granted in having been father to “thousands of children – all boys.”

The opera, perhaps more so than Hilton’s original novel, concludes on a note of transcendence, suggestive of how even the littlest of lives can achieve a kind of fractal correspondence to the great, immanent soul of a benign and integrated cosmos.

The performances featured in Goodbye, Mr. Chips, both vocally and character-wise, are uniformly exemplary, executed by an ensemble of artists each of whom is known for significant contributions to the development of new works.

Bass-baritone Kevin Short does double duty as both Headmaster Ralston – Mr. Chips’ principal academic antagonist – and Chairman Rivers – his chief ally – and acquits himself in both roles with impressive vocal and histrionic versatility.

Finally, tenor Nathan Granner brings to the central role of Chips a voice of burnished tone and admirable flexibility, at times richly emotive, at others light and winsome, admirably distinguishing among the various epochs of the character’s life and career.

This film incarnation of Gordon Getty’s Goodbye, Mr. Chips is both a luxe and lovely calling card for the opera itself, as well as a durable proof-of-concept for future opera-as-film. Almost certainly the film will invite consideration for further mounting of the opera in live productions elsewhere, as well as heralding an achievement that could well lay claim to a place of enduring esteem in the modern canon.