Opera is back in the Berkshires!

The new Berkshire Opera Festival took its first bow on August 27 with its fascinating and beautiful new production of Puccini’s perennially popular Madama Butterfly at the Colonial Theatre in Pittsfield, Massachusetts. If first impressions are everything, a better introduction could not have been imagined.

Of course we know Butterfly well, don’t we? For 112 years she has tantalized and beguiled operagoers (and shamed Western sensibilities) with her tale of innocent, exotic victimhood – the geisha with the heart of gold, used and then discarded by the callous Yankee vagabond. Too fragile to bear abandonment, she chooses death as the only expedient suited to her pain and shame. 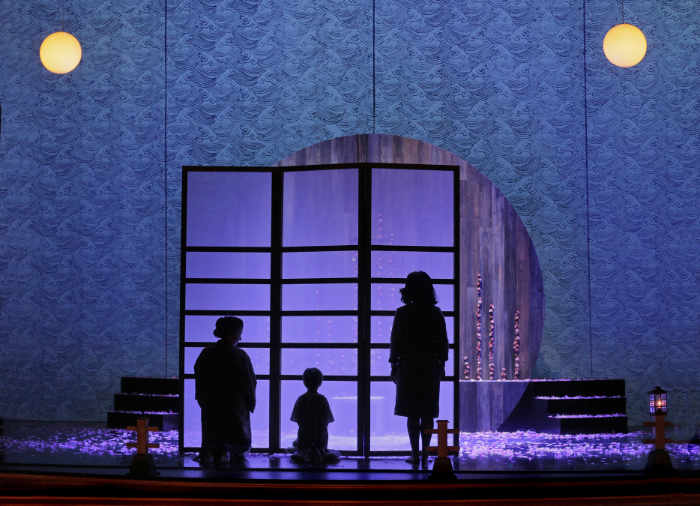 In choosing Madama Butterfly as their inaugural production, the festival’s founders were conscious of the need to capture the right level of public interest.

“We had to be careful not to do something no one’s ever heard of,” says Jonathon Loy, the director of this production. Loy is also the festival’s general director, and one of its two resourceful and energetic co-founders, along with artistic director (and the production’s orchestral conductor) Brian Garman.

“We also couldn’t choose something that is too familiar. Butterfly seemed like the ideal choice. It’s known, but it’s not one of the five most produced operas in the repertory.”

The choice of work was a wise one. The manner of realizing it proves remarkable.

What intrigues most about this Madama Butterfly is its detailed and persuasive open reading of the story. Like the sliding of the shoji screens in Butterfly’s Nagasaki bungalow, director Loy and his cast, along with Garman and the festival’s orchestra, nudge aside standing assumptions to reveal startling new perspectives. This is not our grandfathers’ Butterfly.

Loy has chosen to place this Butterfly in the 1960s – though, if it weren’t for a brief program note, it’s doubtful that the alteration would be readily discerned, at least during the first half of the opera, so dominated as it is by engagement with a society steeped in ancient folkways.

“Updating an opera is not something I take lightly,” says Loy (who has directed at numerous important venues around the country, including at the Metropolitan Opera, where this season he will be overseeing the remounting of Carmen). But Loy wanted to arm this Cio-Cio-San (Butterfly) with a fuller arsenal of discourse on the roles and prerogatives of women beyond her immediate, circumscribed world.

In the ‘60s setting, “she has television, radio, American magazines” – in short, a welter of ideas that stoke the fire in her belly, even if they clash, perhaps violently, with the values on which she was bred.

Loy could not wish for a better ally in exploring this dynamic than soprano Inna Los, the Cio-Cio-San of this production. 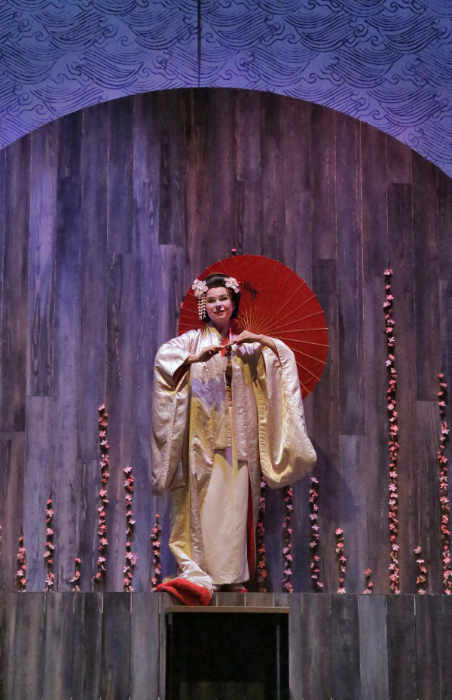 “I’m very collaborative with my artists,” says Loy. “And Inna was challenged and grateful to look at things in a different way.” Indeed, the soprano has taken up the challenge with gusto and has run with it.

From the moment of this Cio-Cio-San’s entrance, accompanied by her family entourage, old assumptions are upended. The procession is decorous and formal, but somehow we sense that it’s Butterfly who has the other women in tow. This is no retiring, blushing bride. She is, through her marriage to Pinkerton, vying for family primacy. She is driven. She may be a 15-year-old girl tutored in the passive and pleasing ways of the geisha, but hers is a mature and resilient spirit, a woman who knows how to play a role to the hilt.

In the dramatic clash with her uncle, the formidable Bonze (played impressively by bass-baritone John Cheek), this Cio-Cio-San does not wither as many another has done. She does battle. She is armed and ready (rather literally – she totes her own disgraced father’s samurai blade in her wedding trousseau, after all). She may lose, but she does not concede. Less Ophelia, more Hedda Gabler, never has a Butterfly been so fully her father’s daughter.

Things get really interesting during the extended love duet that closes Act I. Typically, one is queasily aware of Pinkerton’s carnality, and all sympathy is with the credulous, love-struck Butterfly. In this production, one watches the repeated shifts in power dynamic between the two with an attention worthy of a pro tennis tournament. Pinkerton best watch out – this Butterfly may have the lepidopterist pinned just where she wants him. 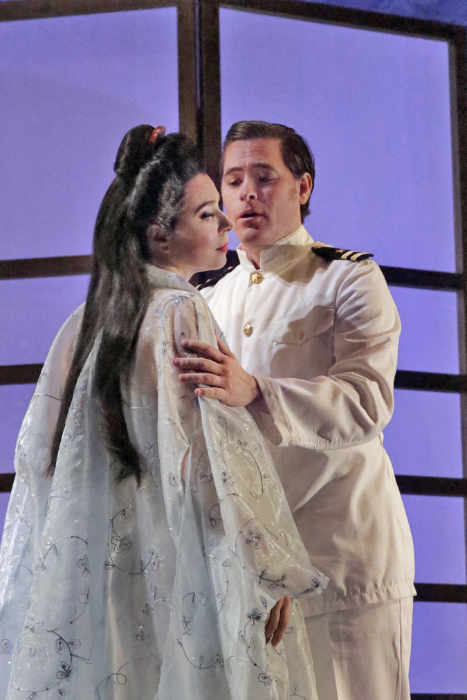 Of course, things don’t quite work out, but it’s not for any want of energy or force of will on the part of the heroine. Act II sees Loy’s clever 1960s conceit pay real dividends. Cio-Cio-San, during her long vigil awaiting Pinkerton’s return, has productively used the time transforming herself into an embodiment of American womanhood. She wears a tailored dress emulative of Jackie Kennedy, and a hairdo evocative of Donna Reed. So obdurate is she in the face of her maid Suzuki’s skepticism about Pinkerton’s return, so fully does she deploy her power of positive thinking, that one might well wonder if the western religion she has adopted in her apostasy from her native culture is Christian Science.

This Butterfly’s ultimate downfall is all the more harrowing for the fact that she faces it down with such adamantine resolve. After she agrees to the renunciation of her and Pinkerton’s son in the heart-rending penultimate scene, soprano Los’s aching, raw anguish, doubled over in a silent scream, is devastating. And her final, measured procession toward her ritual death here achieves the rare, authentic, and awesome transcendence of true tragedy. Butterfly dared attempt a flight too near to the sun.

“I don’t think of Butterfly as naive,” says Loy, in a crucial distinction that actually holds the key to his production. “I think she’s in denial.”

Denial of what? “Of who she is. She only belatedly realizes the mistake she made. She was never going to be an American girl. She was and always will be a Japanese girl,” explains Loy. It’s a great point. And one with great personal resonance for Loy, who adds with gracious candor, “As a gay man who spent a lot of years in denial, I know what that means.”

Tenor James Slayden, as U.S. Navy Lieutenant B.F. Pinkerton, along with baritone Weston Hurt as Sharpless, the American consul at Nagasaki, and Eduardo Valdes, as the Japanese marriage broker Goro, all offer immediately strong delineations of character and power relations. Slayden is handsome, and his Pinkerton has a slight air of patrician condescension. His comfort in his own skin is attractive; his superior manner irritating. He triggers just the right ambivalence in us.

Valdes is sly and warm-voiced, offering a welcome depth in a role often marred by comic obsequiousness and cartoonish vocals. 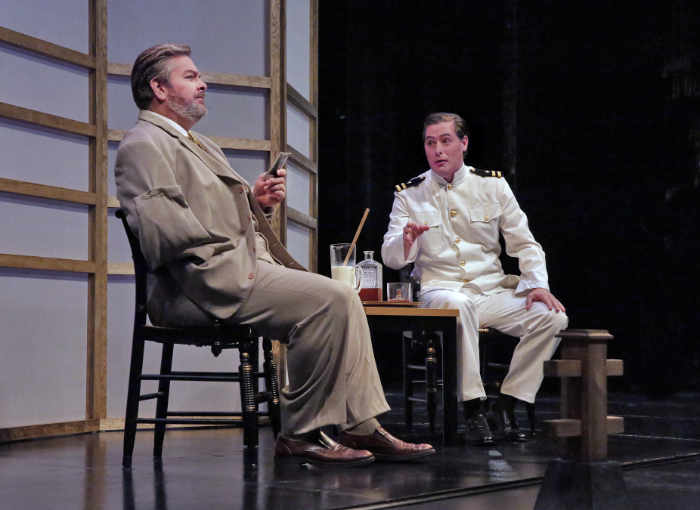 Hurt’s Sharpless is superb. He conveys human warmth and moral weariness and an awareness of his own impotence in the face of Pinkerton’s crass, fast-and-loose plans for his new Japanese bride-to-be.

We are cued from the outset to expect subtle details and realistic textures in the world of this Butterfly. Given Loy’s eye for detail, his production offers something of the rich gratification of reading Henry James – everything is worth thinking about; no single intuition as to character or meaning completely forecloses other possibilities.

A telling example is a moment in Pinkerton’s and Sharpless’ man-to-man chat before Cio-Cio-San’s entrance. “America forever!” Pinkerton sings with brash exuberance. Sharpless, who is played as a veteran who has lost his right arm, casts a wistful glance at the empty sleeve pinned to his jacket before echoing the toast, contemplating what has been sacrificed. (Hurt, incidentally, a baritone much in demand, often performs with a prosthetic right arm; but, says Loy, he was open and generous in making his missing limb an asset here.)

Performances were uniformly vivid. Mezzo-soprano Sarah Larsen as the maid Suzuki was a study in gentle, forlorn sufferance; baritone Benjamin Taylor etched a memorable portrait of wounded dignity in the role of the suitor whom Cio-Cio-San rather callously spurns; and mezzo-soprano Katherine Maysek, in the small but invaluable role of Pinkerton’s American wife, Kate, hits just the right tone of discreet empathy. Child actor Lily Shepardson as Butterfly’s and Pinkerton’s love-child is ideal, angelic, heartbreaking.

The set by Stephen Dobay is gorgeous. Downstage, fluid manipulations of those iconic shoji screens elegantly define and redefine the environment, while upstage, a huge glittering disc, suggestive perhaps of Japan as the rising sun, captures and refracts a universe of subtly changing hues and intensities of light (the lighting design by John Froelich is sublime) and eventually dissolves into a brooding illusion of negative space – the inescapable hollow slowly and inexorably carved in the center of Butterfly’s existence.

Go Tell it on the Mountains

Loy and Garman have done something nigh-unto miraculous in raising the capital for a fully-producing opera company in just two years.

“We knew it was crazy,” Loy says wryly, reflecting back on the adventure he has just come through, and the one on which he has just embarked, “but the Berkshires are one of the most culturally rich places in the country. It didn’t make sense that there shouldn’t be consistent, fully-produced opera here.”

It’s an injustice that Loy and Garman have now rapturously redressed.

The Berkshire Opera Festival’s plans for next year will be announced soon. Long-range, says Loy, his and Garman’s intention is for an annual festival of three full productions – one “mainstage” classic presentation, one Young Artists production, and one presentation of a modern (perhaps new) English-language opera.

Incidentally, the Colonial Theatre, in which the festival production is performing this season, is itself a landmark treasure, painstakingly restored and reopened in 2006 after several decades of desuetude. The theater is rightly celebrated as much for its stellar acoustics as for its stunning interior design.

The Berkshire Opera Festival production of Madama Butterfly scheduled performances at the Colonial Theatre in Pittsfield, Massachusetts on August 27, August 30, and September 2, 2016, at 7:30 p.m. each evening. The performance viewed here was opening night, August 27, 2016. www.berkshireoperafestival.org