REVIEW: of a new comedy, Jane Anger, currently playing at the New Ohio Theater (New York) through March 26, 2022; and

INTERVIEW: with the playwright, Talene Monahon.

It’s London, 1606 – one of the 17th Century’s many recurring “plague years.” Infection is rampant; the populace is sheltering in place; businesses are shuttered; and – perhaps most disheartening – the theatres are dark!

In redress to this grim dispensation, playwright Talene Monahon has delivered a 95-minute comic whupping that is fierce, subversive and ultimately redemptive – holding the mirror up to cruel nature and laughing it to scorn.

“When COVID struck,” Monahon recalls, “there was a slew of articles talking about how Shakespeare had been so prolific during pandemics” – managing, for instance, to pen King Lear.

“I was sort of inspired,” she continues, “thinking about Shakespeare writing Lear in quarantine.”

And what emerged from that inspiration was a two-character, one-act play, “Frankie and Will,” about a Bard seized with writer’s block and his dim but devoted lapdog of a manservant-cum-acting-apprentice tending fecklessly to his master’s whims. 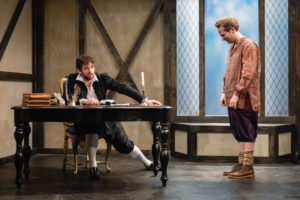 MCC Theater streamed a virtual reading of the play in May of 2020, featuring the domestic-partner acting duet of Michael Urie and Ryan Spahn,.

“I just had so much fun living in that world that I decided I wanted to turn it into a full length piece,” says Monahon, and in that expansion process, she was also determined to develop the presence and perspective of women characters.

The result is the current full-length play, Jane Anger.

More fully and flamboyantly titled The Lamentable Comedie of JANE ANGER, that Cunning Woman, and also of Willy Shakespeare and his Peasant Companion, Francis, Yes and Also of Anne Hathaway (also a Woman) Who Tried Very Hard, the play took shape in large part from Monahon’s fortuitous encounter, in the course of her research, with a tantalizingly shadowy literary figure of the late 16th Century/early 17th Century – Jane Anger.

Known only for her putative authorship of an obstreperously polemical pamphlet, “Jane Anger – Her Protection for Women” – the work is one of the earliest, and most impassioned, literary feminist cris de coeur of the proto-modern era. 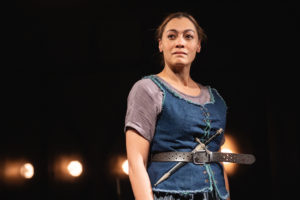 “I was so thrilled by the writing,” says Monahon, “and its mere existence! I just wanted to incorporate it – and that name – into the play.”

Incorporate she did, musing richly on who the real Jane Anger might have been, and giving her a titillating backstory involving Will Shakespeare, to boot.

The resulting distillate of Monahon’s dramatic precocity and its collision with the real Jane Anger is nothing less than a dazzling, sui generis advent of a new theatrical genre – the ”Jacobean Feminist Revenge Comedy.”

Far from angry, at least upon our first encounter with her, the Jane who opens the play and addresses the audience seems a sage and sanguine raconteur – a self-avowed “cunning woman” (a sort of 17th-Century cross between midwife, healer and sorceress), she cheekily brandishes her account of a blotchy personal history (“Before I was a cunning woman, I was a whore, and before I was a whore, I was a weaver’s assistant, and before I was an assistant weaver, I was a little girl with pock marks and a dead rat for a dolly”), before striking out suddenly and searingly: “I wish I had a cure for what is boiling inside of me,” she seethes, “for the anger that is threatening to seep out of my eye sockets and sizzle my skin.”

But the moment passes quickly.

So, just who is this Jane Anger?, we wonder.  Actress?  Agitator?

Patience. Blood will out.

The Privileges of Anger

“Being outwardly angry is a privilege,” explains Monahon. “I think it becomes clear by the end of the play that she has had to swallow so much.”

The other woman who shows up, braving the pandemic to make a bid for reconciliation, is Anne Hathaway, Shakespeare’s abandoned wife who has languished at home in Stratford the last seven years while her husband has been making a name and a fortune for himself in London. 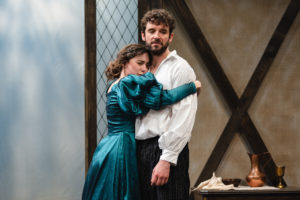 “She is not in touch with her own emotions,” Monahon explains of Anne. “And part of her arc in the play is having them unleashed.”

Between the plenary belly laughs generated by Monahon’s kinetic and exuberant writing, one discerns a durable attention to the logic of rising crisis. The surface is at times almost improvisatory – volatile, irreverent, absurd, scatological, riddled with hilarious anachronism and winks at post-modern self-awareness (“You are a strapping forty-two, sir,” Francis tells Shakespeare / “Francis, the average life expectancy in Jacobean England IS FORTY-TWO,” Shakespeare retorts. “Have Perspective!”) – but it all builds with almost mathematical precision to a final Jacobean burst of comic violence in which the women mete out long overdue retribution for the sins of the patriarchy.

And it’s all followed by a surprising and utterly rewarding coda of calm colloquy between the two women of the play – a consummation that discloses the deeper message behind all the foregoing giddy mayhem.

To Thine Own Self Be True

Monahon’s style might well suggest comparisons to some of the rhetorical fervor of Stoppard, the black humor of Beckett, the insouciant detonations of Ionesco. But Monahon’s own avowed catalogue of influences proves more self-effacing.

“I really just love goofy, silly,” she says. “SNL, Monty Python, Mel Brooks.” She also cites the influence of Christopher Durang (“The way that his characters kind of live in the present … is something that resonates with me as a writer”). And, finally, there’s Jeffrey Hatcher, in whose stage adaptations of both A Confederacy of Dunces and Gogol’s The Inspector General she has performed. 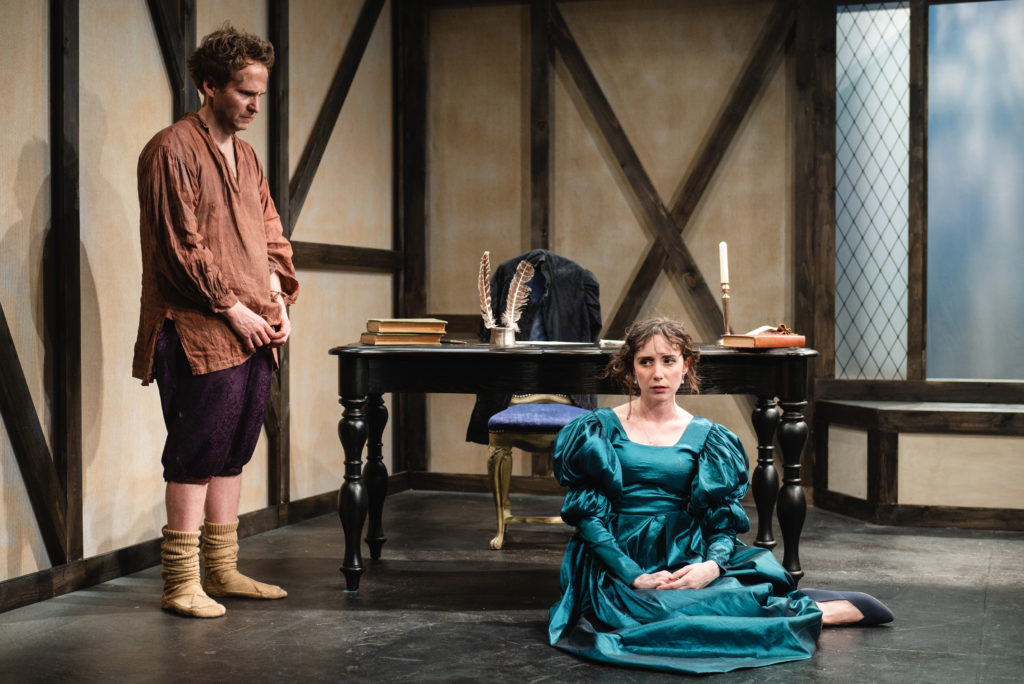 “He is really excellent at both writing a well-crafted joke line, but also thinking sort of on a more macro level about structure,” Monahon says. “Knowing him and acting in two of his plays, I think some of that just rubbed off on me.”

It was also during Monahon’s participation in Hatcher’s Inspector General that she met and played opposite Michael Urie – now one of Monahon’s closest friends, and currently embodying her Will Shakespeare.

“The Actors Are Come Hither, My Lord”

The cast of Jane Anger comprises a quartet of thoroughly winning and quicksilver comic performers.

As Jane, Amelia Workman brings a combination of cool dignity and sly comic acumen to her role of both audience confidante and ultimate antagonist.  Workman expertly navigates the character’s journey from didactic provocateur to avenging angel. 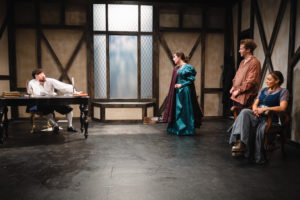 Ryan Spahn, as Shakespeare’s shabby, dentally-challenged “peasant companion,” Francis (“age unclear, everything unclear” according to Monahon’s character notes) proves both gross and gut-busting; dimwitted, yet possessed of overweening showbiz ambitions, he works his way into the playwright’s esteem as a sort of amalgam of Toby from Sweeney Todd and Eve Harrington of All About Eve.

Monahon herself deftly plays Shakespeare’s longsuffering wife, Anne Hathaway – a dithering, logorrheic doormat who gradually awakens to her victimhood as she quaffs full at the font of Jane’s anger.

Finally, Michael Urie is a consummate comic delight as the vain, louche, egotistical man-child, Willy Shakespeare. Urie’s mobility of expression; the dark and darting deviltry of his eyes; the full-scale abandon of his long, rangy arms; the simpering and sybaritic perfection of his vocal delivery all amount to a comic characterization of vivid sublimity.

Does Monahon truly speculate that Shakespeare was an amoral sensualist and abusive misogynist?

“There have been so many imaginings of who Shakespeare could have been,” says Monahon. “I am not making the case that I’ve read his writing and conclude that he was sexist. But I do think that there’s not necessarily always a correlation between someone being a great artist and a good moral person.”

“So, I thought it was fun to sort of imagine him as someone who was a deeply flawed person, who also happened to be a literary genius,” she continues. But Monahon is also quick to affirm that she is not among those who might call for Shakespeare’s “cancellation.” 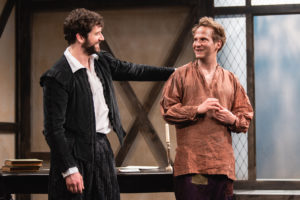 And there is talk afoot of a remounting and continued run later in the year, at an as-yet undetermined venue.

’Tis a consummation devoutly to be wished.

More information about, and tickets for, Jane Anger may be accessed at https://newohiotheatre.org/