You are at:Home»Scena Arts»Film»Avant les rues: A tale of resilience 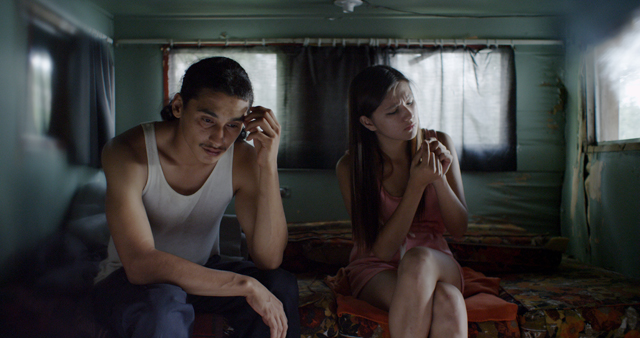 Avant les rues is an extraordinary film in several respects. It’s the first fiction feature in the Atikamekw language; its main actors – all brilliant – are non-professional; and its director, Chloé Leriche, is self-taught. Its world premiere took place in February at the 66th Berlinale, garnering a positive review in the prestigious U.S. magazine Variety.

Shawnouk, a young, unoccupied Atikamekw, gets involved in a robbery that goes wrong. He panics and takes refuge in the forest for a few days. When he returns to his community he tries to find inner peace by practising traditional rites.

Set in Manawan, Lanaudière, the film was shot with the cooperation of three Atikamekw communities. Rikko Bellemarre, the lead actor, is himself an Atikamekw and lives in Wemotaci, near La Tuque. His sister, Kwena Bellemarre Boivin, also plays his sister in the film. Both are members of the Northern Voice singers, and both practise traditional dance. They have performed several times at pow-wows and festivals. This is their first experience with filmmaking.

Drawing inspiration from her musical actors, the director has given music a prominent role in her film. There are traditional songs, songs by Innu hip-hop artist Shauit, and music by the groups The Posterz and A Tribe Called Red. There is also a soundtrack by Robert Marcel Lepage, into which the composer has subtly incorporated some aspects of traditional songs.

Chloé Leriche has been a filmmaker since 2001 and has made a number of shorts. She has also worked as a trainer with Vidéo Paradiso, a project aimed at street people in Montreal, with whom she made a large number of videos.

Following this, she worked with Wapikoni Mobile for several years. This mobile filmmaking unit travels to Aboriginal communities in Quebec for month-long visits. Two trainers and a youth worker encourage and help young Aboriginals to make their own short movies. During the project, Leriche’s longstanding interest in the First Nations developed into a real enthusiasm.

“As a teenager I was very interested in different religions,” she says. “I wasn’t baptized and I became very curious about it all. I met Pentecostals, Jehovah’s Witnesses and Buddhists, and I became interested in Aboriginal spirituality.”

It was only recently that she discovered her family had Aboriginal origins. “While making my film I knew that three of my paternal great-grandparents were members of First Nations or Métis,” she explains.

To Leriche, the title Avant les rues represents the place where the story is set.

“I wanted a vague title that was open to interpretation. When you’re in an Aboriginal community, you’re often far away from towns and roads. Most of them are isolated and you have to travel a long way on dirt roads to get to them. The title hints at a ‘pre-modernity’ aspect, since the story takes us back to sources and traditions.”

One of the things that fascinate her about Aboriginal nations is their resilience. “This is what I wanted to present in my film,” she says. “I thought it was important to show that the Atikamekw people have been hurt, but they have their own methods of healing. I think they’re very strong, because they’re the object of a huge amount of racism, even today, and they live in difficult conditions. Yet they’ve retained their good humour, and they’re always joking around. I think they’re very resilient, and also they’ve managed to keep their language, which is very much alive and spoken by 100% of residents of the communities. They also fight to preserve their land. Despite modern life, young people continue to go into the forest, and clear cutting is disastrous for them.”

The film is almost entirely in Atikamekw, so it is subtitled in French.

“I think this is a vital element of the film. It was important to hear the language. It’s part of the experience and helps us understand the First Nations. It’s a shock when you hear it, because it reminds you how different their culture is from ours.”